Ferry schedules for the Greek islands in 2023

Are you already planning your vacation in the Greek Islands searching for the latest ferry schedules for 2023? You're in the right place! Several ferry companies have announced their new ferry routes so you can easily organize your ferry trip to the Greek islands in 2023 on Ferryhopper easily and quickly.

So, what are you waiting for? Find real-time information, organize your upcoming trip with confidence and book cheap ferry tickets on Ferryhopper! Check all ferries to the Greek islands for 2023:

Important: you can find all Greek ferry timetables for 2023 on our platform the moment they are announced. 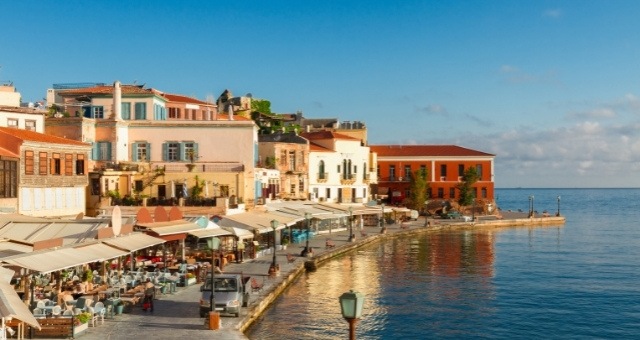 The vibrant old port of Chania in Crete

2023 is here! If you like to organize your trips in advance, that means only one thing. It’s time to plan your trip to the Greek islands! Multiple ferries depart daily from all Greek ports of the mainland to the islands of the Cyclades, the Dodecanese, the North Aegean Sea, the Saronic Gulf, as well as to the Sporades, Crete, and the Ionian Islands.

In Greece, ferry schedules are usually announced several months before, except for local or less popular routes. The most popular Greek island ferries for 2023 have already been announced and many more are expected shortly. See all the latest updates for ferry routes in 2023.

Tip: on our Map of ferries, you can see all Greek island ferry routes with the cheapest ferry tickets to easily plan your trip!

Ferries from Athens to the Cyclades in 2023

Some of the most famous islands of Greece are located in the Cyclades. Every summer, travelers from all over the world visit the islands to have fun and relax in the Aegean Sea!

If you’re starting your trip from Athens, catching a ferry to the islands is really easy. All 3 ports of Athens (Piraeus, Rafina and Lavrio) serve routes to the islands of the Cyclades, with multiple daily crossings all year long.

Some of the most popular ferry routes from Athens to the Cyclades are:

Tip: apart from the popular islands of the Cyclades, you can also visit the lesser-known islands of the Small Cyclades group for your summer holidays this year! The port of Piraeus serves ferry connections between Athens and the islands of the group, such as Donousa or Koufonisia. 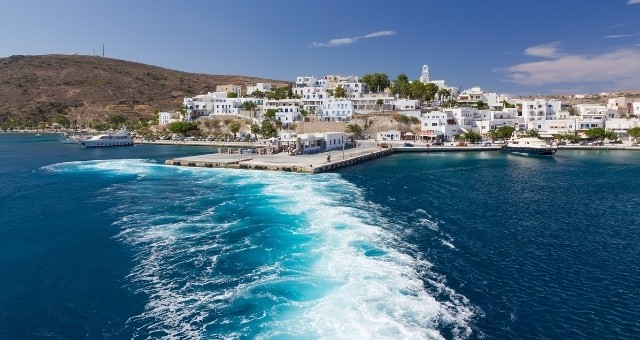 Ferry departing from the port of Adamantas in Milos

The most popular islands of the Cyclades, such as Mykonos, Santorini, Paros, Naxos, and Milos are connected with the ports of Athens with multiple crossings per day during the summer season. There are also weekly ferry departures to other islands, such as Anafi, Folegandros, Serifos, and Amorgos.

Crossings to the Cyclades in 2023 are operated by the same companies as last year. Check our search engine for the most up-to-date 2023 timetables for Blue Star Ferries, Seajets, Golden Star Ferries, Zante Ferries, and more ferry companies.

Ferry ticket prices for Greek ferries in 2023 depend mainly on the destination, the ferry company, the seat and the type of the vessel.

Note: all conventional and many highspeed ferries have car decks. This means you can transport your vehicle from mainland Greece to the Cyclades.

Ferries from Piraeus to Crete in 2023

The island of Crete is one of the most popular Greek holiday destinations, as it combines cosmopolitanism, relaxation, wild nature, and amazing beaches. The ferry companies Anek - Superfast, Minoan Lines, Blue Star Ferries and Aegeon Pelagos normally connect Athens to the ports of Heraklion, Chania and Sitia in Crete.

The ferry tickets cost depends on the ferry company, the destination, and the seat type. You can find economy seat tickets at €36 for Heraklion, €45 for Chania, and €44 for Sitia.

Note: all ferries serving the crossing Piraeus - Crete have car decks for vehicles, as well as bed cabins for a safer and more comfortable journey. 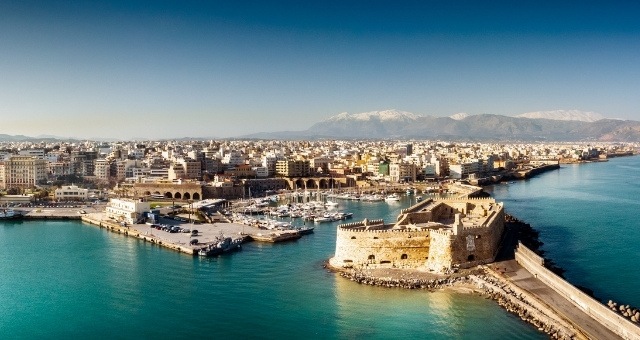 The port of Heraklion in Crete on a sunny day

Ferries from Piraeus to the Saronic Islands in 2023

The Saronic Islands are ideal for island day trips from Athens year-round. If you’re thinking of spending some time in Athens before catching a ferry to the islands, ferry routes from Piraeus to the Saronic Gulf are always running with multiple daily departures.

Specifically, you can catch a ferry from:

The ferry companies that normally serve itineraries for the Saronic Islands are Anes Ferries, Blue Star Ferries, Saronic Ferries and Aegean Flying Dolphins. Most companies have highspeed ferries that take you to the islands of the Gulf in 25 minutes to 1.5 hours.

Ferry prices are quite affordable as you can find tickets at €10 for the closest destinations (Aegina and Agistri).

Tip: if you’re planning to bring your car or motorcycle on board, make sure you check the vessel specifics or contact our Customer Support Team.

Beautiful sunset colors at the harbor of Spetses

Ferries from Piraeus to the Dodecanese in 2023

Ferry company Blue Star Ferries serves ferry connections between the port of Piraeus and the islands of the Dodecanese in 2023. We’re also expecting Aegeon Pelagos to announce routes to the Dodecanese from Athens.

Specifically, there are daily crossings to all popular islands of the group such as:

You can also find weekly itineraries to other islands like Lipsi, Nisyros, Symi, Karpathos, and Kassos.

Find all Greek ferry routes for the Dodecanese with ferry ticket prices starting at €40. And if you’re worried about the long trip, don’t forget that most vessels have amenities like bed cabins and car decks for vehicle transportation.

Tip: if it's your first time driving in Greece, check out some tips for driving on the Greek islands. 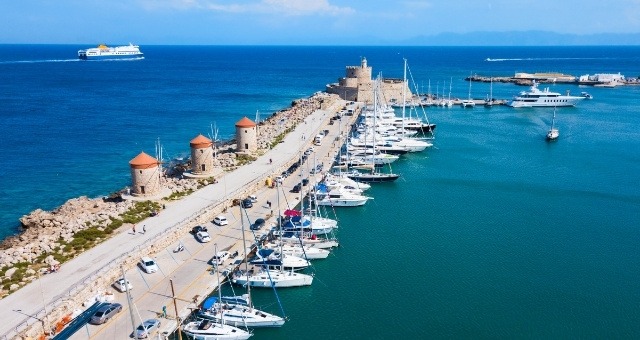 Busy summer day at the port of Rhodes

Ferries to the North Aegean Islands in 2023

Lesbos, Chios and Samos are among the largest islands in the Aegean Sea with many permanent residents and loyal visitors. These islands are lively year-round, so ferry tickets are always in demand.

Ferries to the North Aegean Sea in 2023 depart not only from the port of Piraeus in Athens, but from Thessaloniki and Kavala in Northern Greece as well.

Ferries from Piraeus to the North Aegean Sea in 2023

The islands of the Northeast Aegean Sea are well connected to the port of Piraeus with frequent ferry services. In 2023, conventional Blue Star Ferries ships travel daily from Athens to Lesbos, Chios, Samos, and Ikaria. Most ferry trips run during the night, reaching their destination early in the morning.

Ferry tickets for the Greek Islands of the Northeast Aegean from Piraeus (Athens) are affordable, with a starting price of approximately €30. All ferries traveling to the islands have car decks and bed cabins.

Ferries from Thessaloniki to the North Aegean Islands in 2023

There are frequent ferry connection between Thessaloniki and the North Aegean Islands  throughout the year with at least 1 weekly departure from the port of Thessaloniki to Lesbos, Chios, Samos, as well as Lemnos, Ikaria and Fourni in 2023.

Ferry company Blue Star Ferries usually operates the route every Saturday off-season. Tickets for standard economy seats start at €40 for the trip to Lemnos. The cost of ferry tickets depends on route duration, as well as discounts and ticket types.

Tip: check our page about ferry schedules from Thessaloniki for updates regarding the operation of ferries during the summer of 2023.

Note: in 2023, there are weekly sailings to the islands of the Northeast Aegean from Kavala. The port of Kavala is located in Keramoti, about 35km from the city center. There are 2-3 weekly crossings to Chios and Lesvos, as well as regular crossings from Kavala to Thassos. 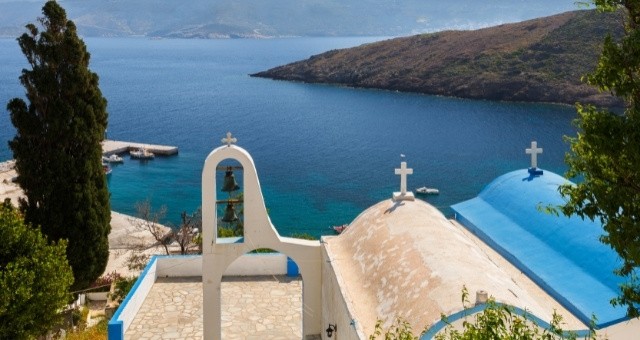 View to the port of Thymaina, Fourni from a hill-built chapel

Ferry routes to the Sporades in 2023

In 2023, traveling by ferry to the Sporades is easier than ever! Apart from the port of Volos which serves ferries to the Sporades all year round, we also expect ferries from Thessaloniki during the summer months as in 2021.

There are weekly ferry services from Volos to the Sporades in 2023. Fast ferries from Volos travel to Skiathos, Skopelos and Alonissos. The ferry operators that serve the Volos - Sporades lines are Seajets, Blue Star Ferries and Anes Ferries.

The price of tickets from Volos to the Sporades differs depending on destination, company, type of ticket, vehicle transportation, and available offers. The cheapest economy class tickets start at €19.5.

See more information about ferry routes from Volos to the Sporades:

Tip: to reach the island of Skyros in the Sporades island group, you can catch a ferry from Kymi in Euboea, 2.5 hours from Athens by car.

Ferries from Thessaloniki to the Sporades are available by Seajets during the summer months. The ferry connection between Thessaloniki and the Sporades is in operation until the end of September and we are waiting for announcements regarding 2023.

The crossing is usually available 3-4 times a week and ferries have car decks for vehicles. Tickets from Thessaloniki for the Sporades usually start at €35 for an economy seat. The duration of the trip ranges from 3 to 4.5 hours depending on the destination.

See more details about the ferry timetables from Thessaloniki to the Sporades and book tickets on Ferryhopper:

Tip: the route from Thessaloniki to the islands of the Sporades is ideal for island hopping with the same ferry! The vessel passes through all islands of the group before reaching Mantoudi in Euboea. 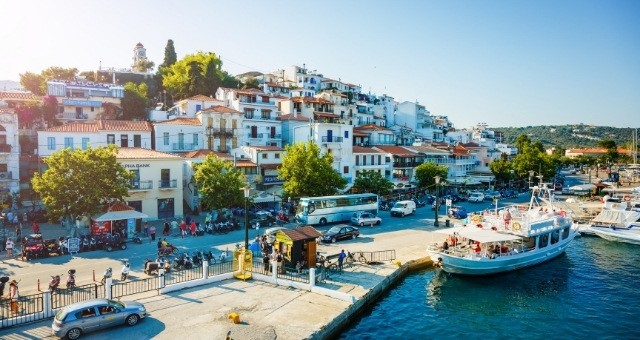 Lively morning at the port of Skiathos

Ferries from mainland Greece to the Ionian Islands in 2023

In 2023, you can book ferry tickets to Corfu and Paxi with the new updated Greek ferry timetables on Ferryhopper.

Ferry company Kerkyra Seaways offers daily trips from Igoumenitsa to Corfu throughout the year. You can also reach Corfu from Igoumenitsa with Kerkyra Lines, which also serves the Igoumenitsa - Paxi ferry route. Tickets are €5-10 for passengers and €22-40 for vehicles. The crossing duration to either Corfu or Paxi is almost 1.5 hours.

Ferries from the port of Patras are expected to keep traveling to Kefalonia and Ithaca in 2023. Usually, there are daily crossings operated by Levante Ferries, although they may be temporarily suspended depending on demand.

It is also worth mentioning that you can also travel to Zante from Kyllini by ferry all year long. Kyllini is located 7km south of Patras and it’s easily accessible by car or bus.

Good to know: Greek ferries in 2023 also travel to Italy! There are weekly routes from Igoumenitsa and Patras to Ancona, Bari, and more Italian ports. 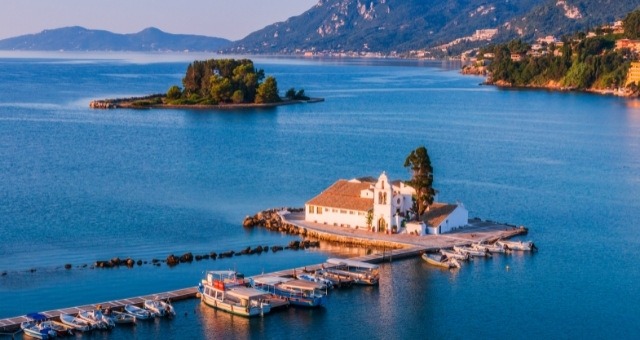 Ferries between the Greek islands in 2023

Apart from ferry routes between the Greek mainland and the islands, there are also Greek ferries serving routes between islands in 2023. It is the perfect way to discover the Greek seas and experience island hopping in Greece!

If you’re eager to make the most of your trip to the Greek islands, then you can also catch a ferry from Heraklion to the Cyclades, explore the islands of the Saronic Gulf or travel back and forth between Crete and the Dodecanese.

Here are some of the most popular 2023 routes between the Greek islands:

The crossing from Santorini to Heraklion is one of the dreamiest and most popular routes in the Aegean Sea! You can travel between the two destinations in just 2 hours every day during the summer! Tickets for the highspeed ferry that serves the Santorini - Crete route are usually around €65.

As for longer island-hopping tours in Greece, why don’t you give the Cyclades group a go? There are frequent ferry connections from/to all large islands, such as Mykonos, Santorini and Paros, and you can also reach off-the-beaten-path destinations, including the mystical island of Delos! 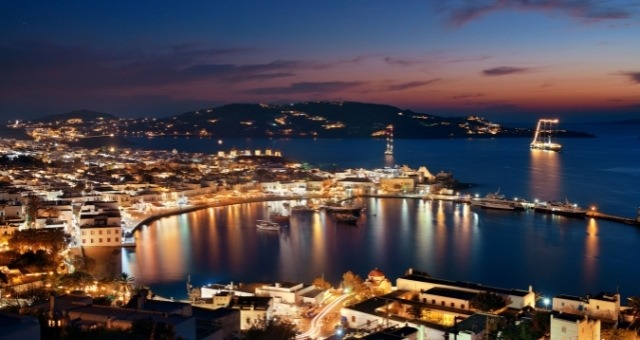 Lights at the old port of Mykonos at night

Where to book ferry tickets to the Greek islands in 2023

On Ferryhopper, you can find all up-to-date Greek ferry schedules for 2023, as well as ferry offers for the Greek islands as they come. Use our fare search engine to compare prices, routes and ferry companies, and book ferry tickets online for all Greek islands in 2023 with no hidden fees!