You close your eyes, spin the globe, and your finger points to Greece. And, what now? Let’s explore together some of the 227 inhabited islands per group and find travel tips about the budget, transportation, and ferry schedules to the Greek islands. Ready to hop on the ferry?

See here the list of the main Greek island groups: Sunset from the village of Plaka in Milos

Scattered off the western coastline of central Greece and to the south of Peloponnese, the Ionian archipelago comprises large and small islands. The group consists of 14 islands in total. However, only 7 of them are the largest and most popular islands of the group:

You will need at least 4 days to explore each of the largest islands of Corfu, Lefkada, Kefalonia, and Zante while you can spend a day on the smaller ones. For the largest islands, it is best to rent a car or a scooter to move in total freedom and explore Venetian castles, ancient churches, and secret coves.

You can also go island hopping and spend a day exploring Antikythera, Antipaxi, Ereikousa, Mathraki, Othonoi, Meganisi or Strofades which are the lesser-known islands of the Ionian archipelago.

The best time to visit the Ionian Islands is from June to September when the weather is sunny and warm. Especially, during July and August, the temperatures are high and the water is just perfect for summer dives and worry goodbyes.

Tip: the average budget for two people to the Ionian Islands is €200 per day. This budget includes accommodation costs for 2 adults in a hotel, lunch, drinks, and entertainment. 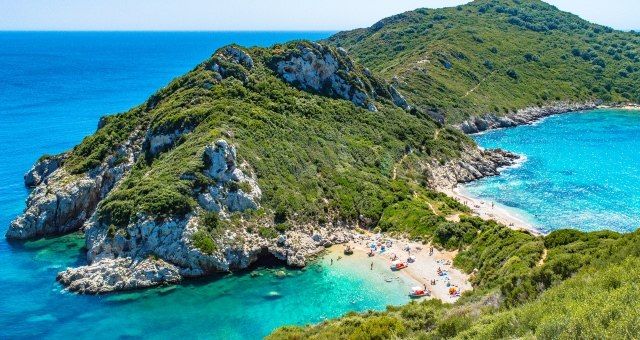 The idyllic coasts of Porto Timoni and Limni in Corfu

The Cyclades are undoubtedly the most famous island group in the Aegean Sea. The archipelago includes many islands so we better focus on the major ones. Among the most popular islands of the Cyclades are:

The weather in the Cyclades during summer is hot with an average maximum temperature of 32°C. However, during July and August prepare to feel the breeze of the meltemia, strong summer winds that are not the best for sailing boats.

Also, the best way to get around Santorini, Mykonos, and Syros is on foot or by bus while Milos, Paros and Naxos require a car to explore. You will need 4-5 days to fully explore the islands of the archipelago. The Cyclades is the most popular and the most expensive Greek island group. Santorini and Mykonos are the most expensive islands on the list with  €300-€350 per person per day.

Tip: ferries also depart from the port of Piraeus to Crete, to the port of Heraklion and Chania. Piraeus - Crete ferries usually depart late in the evening and travel during the night. 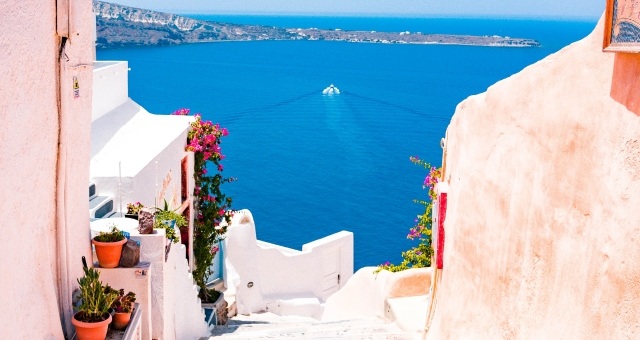 White-washed houses of Cycladic architecture overlooking the sea in Santorini

The Sporades are an archipelago along the east coast of the Aegean Sea. They consist of 24 islands, only 4 of which are permanently inhabited:

The climate of the Sporades is the Mediterranean with mild autumns and hot, sunny summers. The temperature of the sea is still cold in May and cool in June. However, it becomes high enough for swimming from July to September when it reaches 25°C.

To really appreciate the beauty of the islands and explore them in depth, it would be best to spend at least 3 days in each of them. You can move around by bike, bus, motorbike or even water taxis. You can use the red bus route in Skiathos that takes you to all the amazing beaches, take a water taxi to move around the island of Alonissos, or rent a car to comfortably move around Skopelos.

Related to the ferry routes connecting the Sporades to the mainland, several connections are operating from the port of Volos all year round while there are 3-4 weekly connections to the Sporades from Thessaloniki during the summer months.

Tip: the average daily budget is €85 per person for the Sporades. This budget includes accommodation costs in a hotel, lunch in a local restaurant, drinks, and entertainment. 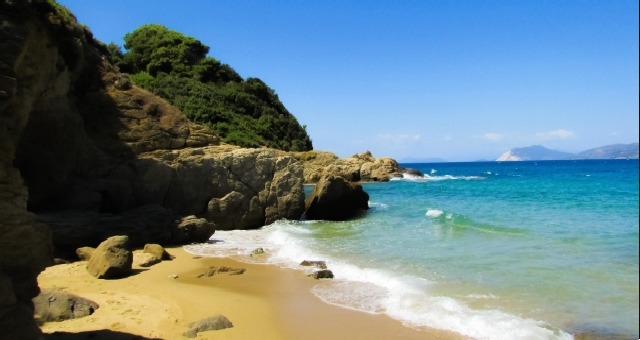 Moving on to the Dodecanese (meaning 12 islands in Greek) is in reality far more than 12. Among the most popular ones are:

The best time to travel to the Dodecanese islands is from May to September when the weather is hot and perfect for beach swimming. If your goal is a chocolate tan under the sun, the warmest month in the Dodecanese is August with an average maximum temperature of 30°C.

The best way to explore the island group is by scooter. Most islands have narrow streets and medieval alleys it is very easy to drive around on two wheels.

Tip: the average daily budget is €65 per person on your trip to the Dodecanese. However, Rhodes is more expensive than other islands of the archipelago with an average budget of €90 per day, including accommodation, food, and entertainment. 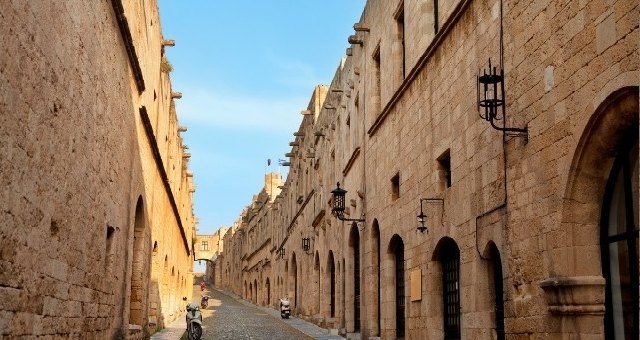 A medieval alley in the Old Town of Rhodes

Let’s hop on the next archipelago on our list! The Saronic Islands are located between the peninsula of Attica and the northeastern coasts of Peloponnese. The most popular of this group are:

The Saronic Islands, including Dokos and Salamis, are ideal for island day trips from Athens year-round. If you’re thinking of spending a few days in Athens before catching a ferry to the islands, ferry routes from Piraeus to the Saronic Gulf operate with multiple daily departures.

The best period to visit travel the Saronic Islands is from April to September with great temperature, sunny days, and romantic nights. However, in June the sea is still cool so for warmer waters visit the island group in July and August.

The best way to move around the Saronic Islands is to rent a scooter. However, keep in mind that in Hydra there are no vehicles allowed.

Tip: the average budget (hotel, food, entertainment) per person to the Saronic Islands is around €75 per day. 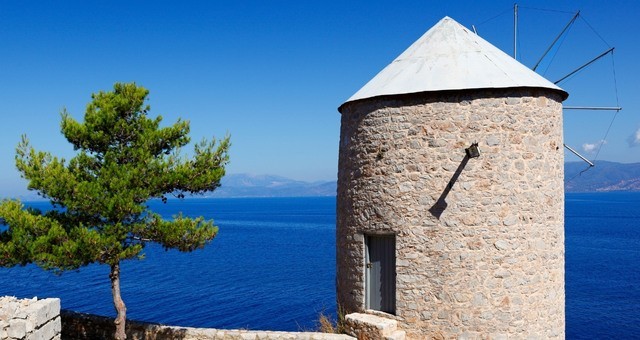 The stone windmill of Hydra overlooking the Saronic Gulf

The main islands in the northeastern Aegean Sea are:

Tip: the North Aegean Islands are less expensive than the Cyclades so if you’re traveling on a budget and looking for a low-cost vacation, you found the right island group for you. You will need around €60 per day to cover your accommodation.

The picturesque fishing village of Armenistis in Ikaria

By now, you must already know that all Rhodes lead to Greece (come on, it was a good one!). Book your ferry tickets at the same price with the ferry companies online on Ferryhopper and live your myth in 1, 2, or more Greek islands.