Piraeus is the main port of Athens and the city's gateway to the islands of the Aegean. It is the largest port in Greece and the busiest in Europe, with approximately 20 million passengers passing through per year. There are daily ferry crossings from the port of Piraeus to the Saronic islands, the Cyclades, Crete, the Dodecanese and the North Aegean islands.

The port of Piraeus is located 12km southwest of the center of Athens, on the east coast of the Saronic Gulf. It is the main gateway from the Greek mainland to the islands of the Aegean and Crete. The port is big and has 12 gates from which the ferries depart. More specifically, the departure and arrival gates of the port of Piraeus are the following: 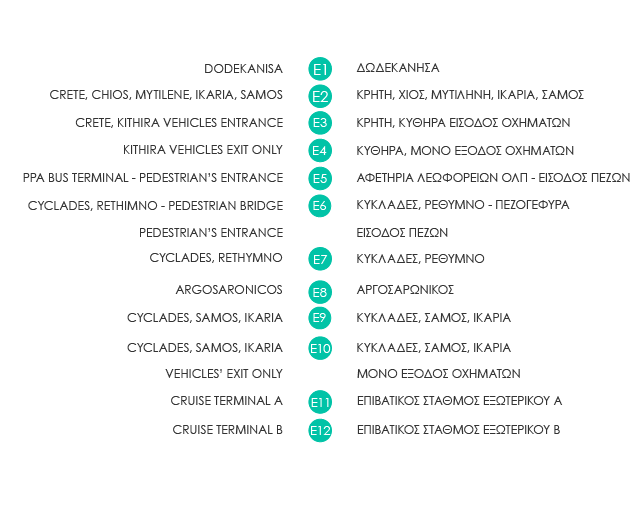 The 12 gates and all the destinations from the port of Piraeus.

Note: even though ferries usually depart from the gates mentioned above, there are times when the departure gate may change depending on traffic at the port. Therefore, we recommend that you check the electronic display boards located at the port or ask the port authority for more information.

It takes around 1 hour to walk from one side of the port of Piraeus to the other without carrying suitcases.

In order to help you, we have made a map with useful information about the port of Piraeus: gate locations, distance between gates, taxi rank, port shuttle bus stops, ticket booths, metro and suburban railway station. You can download the map here. 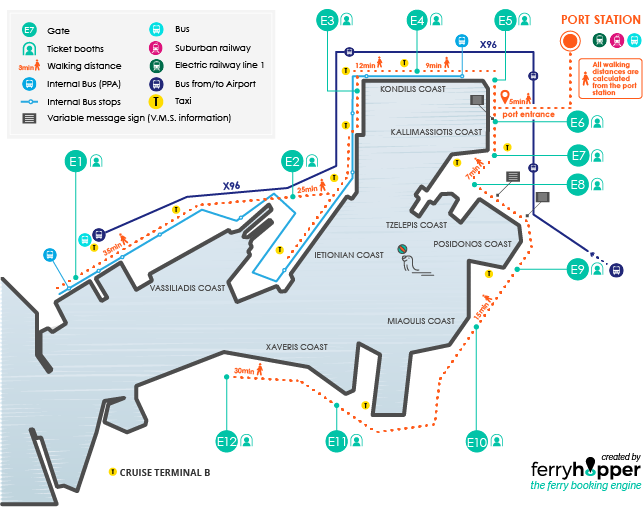 Ferryhopper's map with all the info about the port of Piraeus.

Shuttle bus within the port of Piraeus

There is a shuttle bus operated by the Piraeus Port Authority that offers free transport within the port. The bus departs from the port's main entrance, which is located close to the port station, as you can see on the map. There, you will find electronic display boards with waiting times for the bus. The shuttle stops are the following:

Parking at the port of Piraeus

Parking inside the port of Piraeus is prohibited. You can park your vehicle either in a private parking lot or find a space in the streets near the port. Keep in mind that the latter may prove time-consuming.

Ferry routes from the port of Piraeus

Piraeus is the busiest passenger port in Europe. The port serves ferry connections from mainland Greece and Athens to the Cyclades, the Dodecanese, the islands of the Saronic Gulf and the Argolic Gulf, the North Aegean islands and Crete.

Ferry from Piraeus to Crete

There are at least 3 daily ferry crossings from the port of Piraeus to Crete. The ports of Crete that are connected to Piraeus are Heraklion, Chania, Rethymo and Sitia. Ferries to Heraklion and Chania depart from gates E2 and E3, while ferries to Rethymno depart from Gates E6 and E7. During the summer, there are additional sailings from Piraeus to Crete to satisfy the increased demand.

The overnight ferries from Heraklion and Chania usually depart at 21:00 and arrive at their destination at 06:00 or 06:30. They all have cabins, so that you can enjoy a more comfortable trip.

Ferry from Piraeus to the Cyclades

The port of Piraeus serves ferry connections to all the islands of the Cyclades. There are at least 2-3 weekly crossings from Piraeus to most islands and several daily sailings to top destinations, such as Syros, Naxos, Mykonos and Santorini. These are ideal for island hopping, as they are directly connected to several other Aegean islands.

Ferries that travel to the Cyclades depart from gates E6, E7, E9 and E10.

Ferry from Piraeus to the Dodecanese

Ferries from Piraeus to the islands of the Dodecanese, such as Rhodes and Kos, usually depart from gate E1.

You can take the ferry from Piraeus to the following islands of the Dodecanese: Astypalaia, Chalki, Kalymnos, Karpathos (Diafani and Karpathos), Kasos, Kastellorizo, Kos, Leipsoi, Leros, Nisyros, Patmos, Pserimos, Rhodes, Symi and Tilos.

Ferry from Piraeus to the North Aegean Islands

Some of the ports of the North Aegean that are connected to Piraeus are: Agios Efstratios, Chios, Fournoi, Ikaria (Agios Kirykos and Evdilos), Lesbos (Mytilene), Lemnos, Oinousses, Psara and Samos (Karlovasi and Vathy).

Ferry from Piraeus to the Saronic Islands

Throughout the year, there are frequent ferry connections from the port of Piraeus to the islands of the Saronic and the Argolic Gulf. Ferries depart from gate E8.

You can travel by ferry from Piraeus to the following islands of the Saronic Gulf: Aegina, Agistri, Hydra, Poros and Spetses. 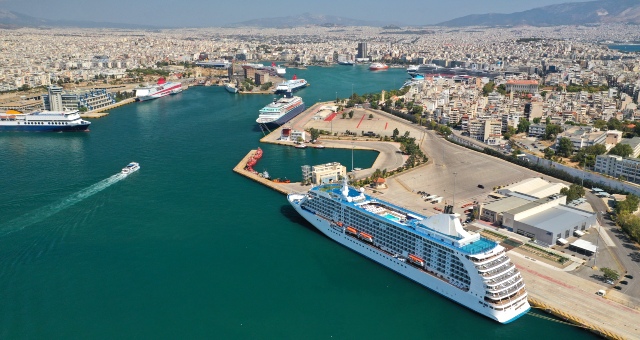 Panoramic view of the port and the city of Piraeus.

How do I get to the port of Piraeus?

You can go from Piraeus to the center of Athens and to Athens International Airport Eleftherios Venizelos by public transport.

From Athens city center to Piraeus port by metro

You can get to Piraeus by metro line 1 (the green line). Line 1 runs from Kifissia to Piraeus, passing through the center of Athens and making stops at central stations Omonoia, Monastiraki and Thisio. The stations Attiki, Syntagma and Omonoia on the green line connect with metro line 2, and the stations Monastiraki, Syntagma and Aerodromio (airport) connect to metro line 3. The metro ride from Monastiraki to Piraeus takes about 20 minutes and trains depart approximately every 15 minutes. You can purchase your ticket at the metro stations at the price of €1.20 for a 90-minute ride.

Thanks to the new metro station in Piraeus, you can also reach the port of Piraeus directly from the Athens airport. The blue line (metro line 3) connects the Piraeus port with the airport and several central stations in Athens, such as Syntagma, Monastiraki and Evangelismos. The metro ride from the airport to the new Piraeus station takes about 1 hour and there are departures every 36 minutes.

From Athens city center to Piraeus port by bus

There are regular bus connections from the port of Piraeus to several areas of Athens. The main lines that connect Piraeus to downtown Athens are bus 040 (from Syntagma to Piraeus) and bus 049 (from Omonoia to Piraeus). You should get off at the stop Korai Square, which is 10 minutes away from the port on foot. The ticket price for a 90-minute ride is €1.20. To find the fastest way to get from where you are to the port of Piraeus by bus, have a look at Google Maps.

From Athens city center to Piraeus port by taxi

It usually takes approximately 35 minutes to go from the center of Athens to the port of Piraeus. Please remember, however, that there might be traffic congestion in the center of Athens and around the port, especially in the summer. In that case, the taxi ride may take more than 1 hour, so ensure that you allow for extra time. The distance from Syntagma to the port of Piraeus is about 12km and the journey costs around €20 during the day and around €25 at night (00:00-05:00). 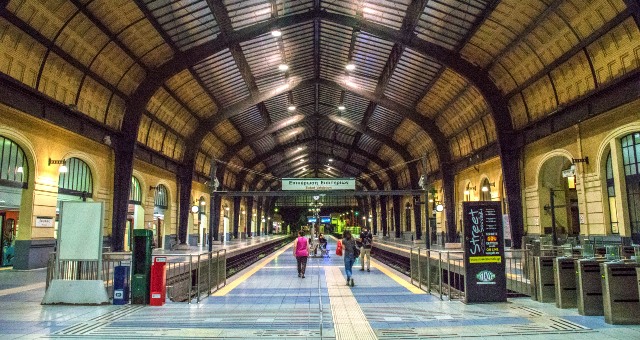 The historic building of the metro station at the port of Piraeus.

From Athens airport to Piraeus port

Metro: The metro is the easiest way to get from Athens to Piraeus. Trains depart from the airport every 30 minutes. From Monastiraki, take metro line 1 (green line) towards Piraeus. The trip takes about 1.5 hours. Full ticket price is €10 per person, while there are also discounted tickets for students, multi-children families, etc.

Suburban railway: The suburban railway connects Athens International Airport with the port of Piraeus directly. Trains depart every hour, with the first one at 06:09 and the last at 22:09. The journey takes 1 hour and the ticket costs €10 per person. There are also discounted tickets for students, multi-children families, etc.

Bus: Bus route X96 connects the airport of Athens to the port of Piraeus. The service runs 24/7 and buses depart every 20-30 minutes. Ticket price is €6 and the journey takes approximately 1 hour. Children under the age of 6 travel free of charge.

Taxi: It usually takes approximately 45 minutes to get from the airport of Athens to the port of Piraeus. Please remember, however, that there might be traffic congestion, and in that case the ride may take longer than 1 hour. The cost is around €50 during the day and around €65 at night (00:00-05:00). The same price applies for up to 4 passengers. Ferryhopper in collaboration with Welcome Pickups offers safe transfer to and from the port at low prices and by experienced English-speaking drivers. Book your transfer to the port of Piraeus in just a few clicks!

Useful info and travel tips for the port of Piraeus

The port is located right next to the center of the city of Piraeus. In close proximity, you will find shops, supermarkets, pharmacies, banks, restaurants and cafés. There are ATM machines close to the metro station (National Bank of Greece, Piraeus Bank) and close to gates E7 and E8 (Eurobank, Alpha Bank). Ferryhopper recommends that you purchase everything you need before you enter the port, as amenities may not be in reach.

If you have some time to spare - and not a lot of luggage - Piraeus has some beautiful neighborhoods that you can explore, such as Piraiki, Marina Zeas and Kastella. You should also visit the impressive Municipal Theater of Piraeus.

Some useful contacts to keep handy when traveling to and from Piraeus: 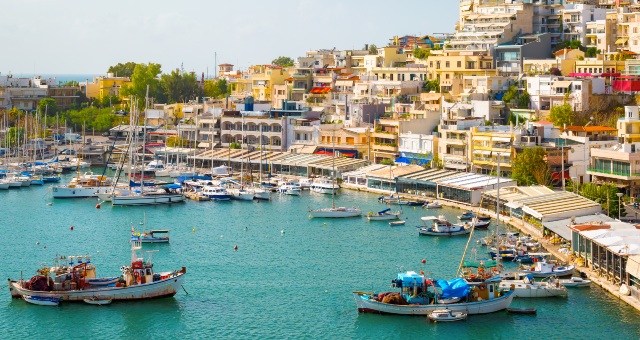 Go for a walk in Mikrolimano in Piraeus and enjoy fresh fish next to the sea.

How do I book ferry tickets from Piraeus to the Greek islands?

Book cheap tickets to and from the port of Piraeus online on Ferryhopper! Compare prices and companies, and find all schedules, offers, ticket types and ferry routes to Crete, the Cyclades, the Dodecanese, the North Aegean and the Saronic islands. Traveling by ferry to the Greek islands has never been easier!