Ikaria is an island of wild beauty in the Northeast Aegean Sea. It is famous for its relaxed vibes, as well as the longevity of its inhabitants. On this page, you will find useful information and tips about vacation in Ikaria, the best beaches, its famous villages, the local food, popular activities, the ecstatic panigiria and the available ferry schedules. 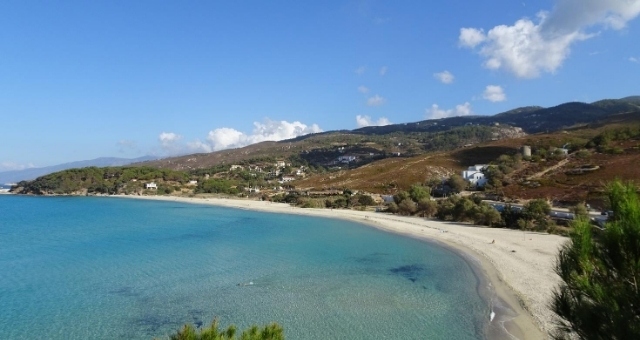 Crystal blue sea at the beach of Mesakti in Ikaria.

Ikaria is an ideal destination for nature lovers. It has a variety of landscapes such as forests and rivers, sandy beaches with rolling waves as well as peaceful coves, gorges, hot springs, rare flowers and trees.

If you are looking for a peaceful break from city life, then Ikaria is definitely the place to be. The island is renowned for its relaxed vibes, as well as its delicious local products that are part of the healthy lifestyle of its inhabitants. A few years ago The Guardian named Ikaria “the island of long life” as it has the longest life expectancy in Greece.

Vacation in Ikaria can be relaxing and calm, but also ecstatic. The island is famous for its panigiria, the traditional festivals that usually mark local religious holidays and involve food, drink, folk music, and a lot of dancing until the early morning hours.

How to get to Ikaria

What to do in Ikaria

Ikaria is a great destination for both summer and winter holidays. The island is ideal for outdoor activities, it has beautiful beaches and villages. We suggest that you rent a car in order to discover the nature, monuments and numerous sights of the island. Here are the best holiday tips for Ikaria:

Ikaria has a variety of beaches to choose from. The coast of the island is diverse, with endless sandy beaches, rocks and wild landscapes, coves with white sand and turquoise waters, or small bays surrounded by forests. Here are some of the most beautiful beaches in Ikaria:

Tip: Since many of the beaches of Ikaria are only accessible on foot (usually you can leave your vehicle nearby), it is good to have suitable shoes or hiking sandals for walking on rough terrain. 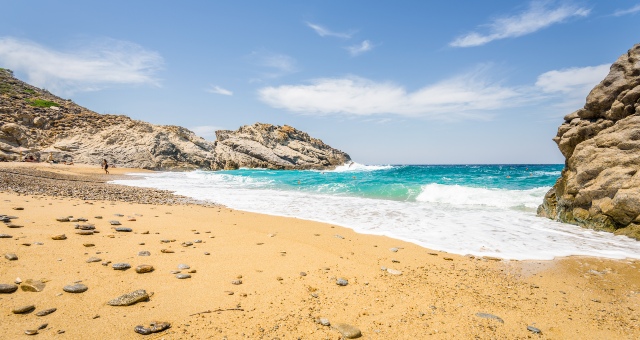 Quiet sunny day at the beach of Nas in Ikaria.

Ikaria took its name from the myth of Icarus, the son of Daedalus, who fell into the sea after his wax wings melted from the sun. In fact, there is a rock in the sea, near the village of Chrysostomos in the area of Agios Kirykos, "The Rock of Icarus" that according to the myth, is the point where Icarus fell. Apart from the impressive natural sights and landscape, Ikaria has numerous archaeological sites, castles, lighthouses and towers that we recommend exploring. Here are our favorite sights to visit in Ikaria:

In Ikaria, you will relax, dance and eat great food! The island has a rich gastronomic tradition and delicious local products. We recommend tasting the following:

We recommend visiting the villages of Ikaria to taste the local delicacies and the wine of the area, as well as to get to know the Ikarian lifestyle. Both the coastal and the mountainous settlements of Ikaria will charm you with their beauty. Some of our favorite villages in Ikaria::

Tip: The picturesque mountain village of Christos Rachon is famous for its working hours and perception of time. Forget the typical daily routines! Life in this village starts at night, while during the day almost everything is closed. This is also why Christos Rachon is popular for a late night out.

Ikaria is a great destination for outdoor activities and water-sports. Here are a few popular ways to spend your time in Ikaria:

If you choose Ikaria for your summer vacation, you should definitely go to one of the numerous panigiria! The traditional festivals of Ikaria usually take place in beautiful locations, for example in forests, in village squares, in the seaside or in the yard of small churches. The feast and live music often last until the early morning hours and the atmosphere is ecstatic. Whether you know the dance steps or not, the experience will surely be unforgettable!

The most famous panigiri in Ikaria is that of the 15th of August in the village of Lagkada, which starts in the morning and lasts almost 24 hours. It is also worth going to the festival in Magganitis, which often coincides with the August full moon and the scenery is breathtaking. 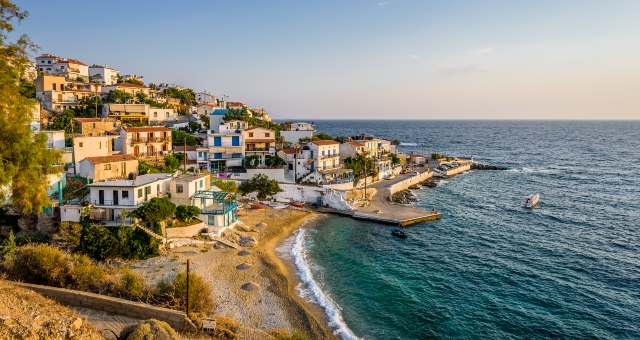 The fishing village of Armenistis in Ikaria.

Ikaria has 2 ports: Agios Kirykos on the south side and Evdilos on the north side of the island. The distance between the two ports is about 1 hour by car. In both settlements, you will find ATMs, supermarkets, banks and gas stations. In Agios Kirykos there are also pharmacies as well as the General Hospital of Ikaria. In Evdilos you will also find a medical center. The island is served by a small airport, located on the northeast side of the island, at a distance of 20 minutes drive from Agios Kirikos and 1-hour drive from Evdilos.

The bus services of Ikaria serve the two ports, the airport as well as some of the large villages, such as Armenistis or Christos Rachon.

The island has long distances and to be able to navigate easily we suggest that you bring your vehicle or rent one there. If you are in a social mood you can always try hitchhiking as it’s a very popular method of transportation in Ikaria.

Important phone numbers for your holidays in Ikaria 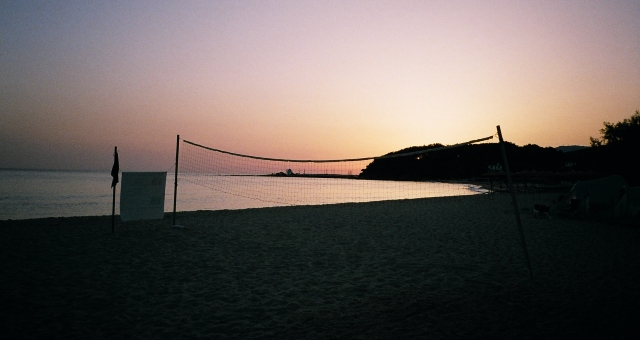 Beautiful sunrise colors at the beach of Mesakti.

Ferry schedules and tickets to Ikaria

Ikaria is located in the northeast Aegean Sea, west of the islands of Fourni and Samos. The island is regularly connected by ferry to mainland Greece and primarily the port of Piraeus. The ferry connection of Ikaria with northern Greece is served by the port of Kavala. More specifically:

Tip: Ferries that travel from Athens or Kavala to Ikaria usually have a garage, so you can transfer your vehicle. We also suggest that you book a bed cabin for a more comfortable journey since the ferry trip to Ikaria can be long (especially if you are departing from northern Greece).

Ikaria is a great starting point for island hopping! From its 2 ports, you can travel by ferry to the islands of the North Aegean, as well as the Dodecanese and the Cyclades.

There are direct ferry routes from Ikaria to the following ports:

If you are overwhelmed by how many islands you can travel to from Ikaria, don't worry! You can see all ferry connections from and to the ports of Ikaria on Ferryhopper's Map of ferries. Organizing your island hopping in Greece can be fast and easy!

Where to book ferry tickets to Ikaria

Book ferry tickets for Ikaria online on Ferryhopper and get the best prices for your summer vacation on the Greek islands. Find all the available ferry schedules and sailings, compare prices and choose the most convenient travel itinerary to/from Ikaria in just 4 clicks!