Mykonos is one of the most famous holiday destinations in Greece. A cosmopolitan island in the Cyclades and a celebrities’ favorite for its renowned nightlife and natural beauty.

Find all the information you need for your vacation in Mykonos: what to do and how to get there, the best beaches, food, and attractions. Compare ferry schedules and book ferry tickets to Mykonos on Ferryhopper, at the same prices as ferry companies! 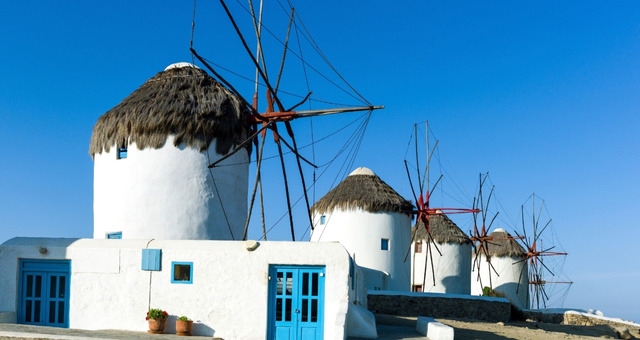 The windmills in the Chora of Mykonos, a popular photo spot

Mykonos is one of the top destinations for summer holidays in Greece. A beautiful island, located in the north Cyclades, Mykonos is renowned for its cosmopolitan lifestyle, its intense nightlife, its amazing beaches and attractions. It is often called “the celebrity island”, as it is popular amongst celebrities and jet-setters from all over the world.

In Mykonos, you can have your dream luxury holiday in its many villas, luxury hotels, gourmet restaurants and extravagant bars. Shopping lovers will also find a mix of designers’ stores, high-end fashion stores and exclusive boutiques.

Mykonos is not, however, just a party island or a big-budget getaway. The lively atmosphere of the island, as well as its numerous beautiful beaches, will charm you straight away. We also suggest that you explore the classy Mykonos Town (Chora), as well as the island’s picturesque settlements.

Family holidays in Mykonos are also recommended. There are many kid-friendly resorts as well as numerous sandy beaches that are easily accessible and good for beach games. Some of the most famous Mykonos beaches also have water sports facilities for all ages.

How to get to Mykonos

Traveling by ferry from Athens to Mykonos is one of the easiest and most affordable ways to visit the island. There are frequent ferry routes from 2 ports in Athens (Piraeus and Rafina) all year round, and you can choose between standard or high-speed vessels. The fastest ferry to Mykonos takes approximately 2 hours.

Find more information about ferry schedules to Mykonos below.

Mykonos also has an airport, so you can get to the island by plane as well.

What to do in Mykonos

One thing is certain: in Mykonos, you won’t get bored, as you’ll have many different places to go and things to do every day.

Make sure that you stroll around the Chora of Mykonos, and discover its beautiful neighborhoods and stone-paved alleys. The area of Little Venice is one of the most impressive spots in Chora, with the 18th-century houses literally built over the sea. Just outside of Chora, you will find the famous windmills of Mykonos, the perfect photo background and sunset spot.

It is worth organizing a day trip to Delos to admire the islet’s impressive landscape and to get to know the history of the Cyclades. Delos is one of the most important archeological sites in Greece and is located just 6 nautical miles from Mykonos. According to Greek mythology, it was the birthplace of Apollo and Artemis. There are numerous daily crossings from Mykonos to Delos. The trip lasts around 30 minutes and the regular return ticket costs about €22. 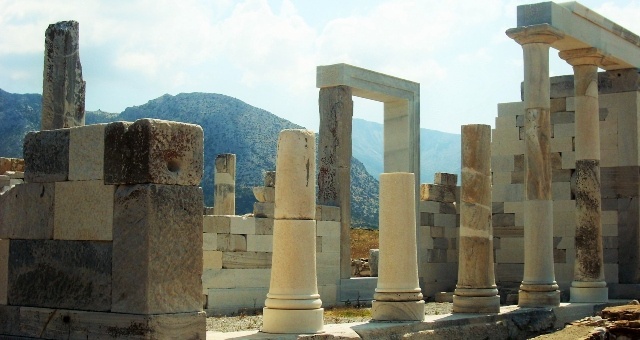 The impressive archaeological site of Delos

Mykonos has beautiful beaches across its coast. The majority of them have umbrellas and sunbeds (usually can be rented for a fee), while there are also beach bars and all-day restaurants where you can get the full seaside experience of Mykonos: blue sea, beautiful scenery, great food and often… all-day party!

On the popular beaches of the island, you will find some of the most famous beach clubs of Mykonos, like the ones in Psarou, Paraga, Ftelia and Paradise. However, there are also more isolated beaches, such as Agios Sostis, Kapari and Merchia, as well as quiet beaches that are ideal for families, such as Panormos, Agios Stefanos and Agrari.

Here are some of Mykonos’ best beaches: 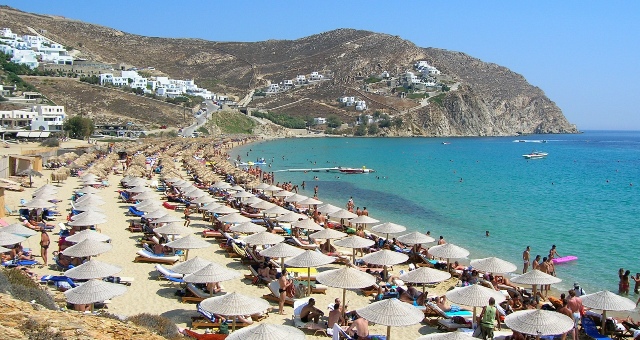 A typical summer day at the beach of Elia, on the south coast of Mykonos

Sightseeing and activities in Mykonos

Mykonos is an island with a rich history that dates back to prehistoric times. In modern times, it played an important role as a key port in the Greek Revolution.

Here is a list of Mykonos attractions to visit during your stay:

If you like water sports, then we recommend visiting the beaches of Kalafatis, Elia and Super Paradise. We also suggest you explore the impressive seabed of Mykonos and go diving in the nearby islets of Tragonisi, Prasonissia and Chtapodia. 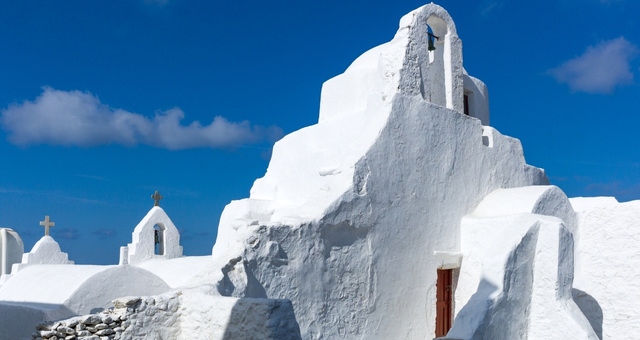 The vivid nightlife is one of the main reasons to visit Mykonos in the first place. No wonder Mykonos is often called the "Ibiza of Greece".

In the alleys of Mykonos Town (Chora), as well as in the neighborhoods of Little Venice and Matogiannia you will find numerous bars, clubs and cocktail bars -some with incredible sea views. In ​​Gialos, you will find some of the best clubs in Mykonos, such as the legendary Jackie O ’and Astra, but also the traditional kafeneio of Bakoya for your first morning coffee.

Mykonos’ nightlife is not limited to the bars of Chora. On the island’s beaches, you will find some of the most renowned all-day beach bars and clubs of Mykonos. You can, therefore, combine your swim or afternoon drink with music events by international DJs, live gigs by Greek and foreign artists, as well as many parties. Some of the most famous beach clubs in Mykonos are: Nammos (Psarou), Skorpios (Paraga), Paradise Beach, Alemagou (Ftelia) and Lohan Beach House (Kalo Livadi).

For those who love electronic music, the island’s must is, of course, the club Cavo Paradiso, near Paradise beach. It is worth staying until the early morning hours to enjoy the sunrise! 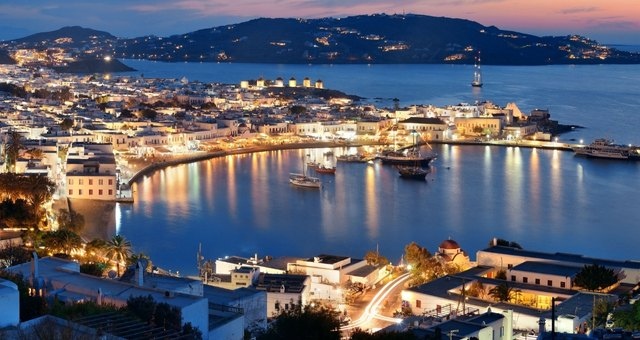 The magical lights of Mykonos Town by night

Mykonos is a pioneer in Greek and international gastronomy. If you want to experience the splendors of Mykonos food (and you have the budget) then we suggest making the most of your stay. You can eat in gourmet restaurants, in hotels overlooking the endless Aegean blue, in modern bar-restaurants on the beach, on your luxurious sun lounger, on yachts and private piers.

There are, of course, quieter and cheaper options, mainly on smaller villages and beaches. Some value-for-money restaurants in Mykonos include "Lefteris" and "Balothies" in Ornos, the taverna of Nikolas in Agia Anna, the small tavernes in Fokos and Lia, as well as the taverna of Mathios in the new port.

The traditional cuisine of Mykonos is delicious and we suggest trying different tastes during your stay on the island. Some of our top food recommendations for Mykonos are: 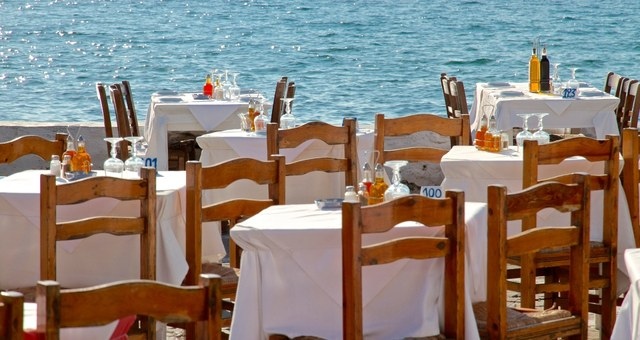 Restaurant with a relaxing atmosphere by the sea

Mykonos has 2 main villages and numerous smaller settlements that are usually attached to the largest beaches. The traditional Cycladic architecture of the Mykonean villages merges with modern summer houses, villas and hotels, creating a beautiful landscape.

Here are the top villages to visit in Mykonos: 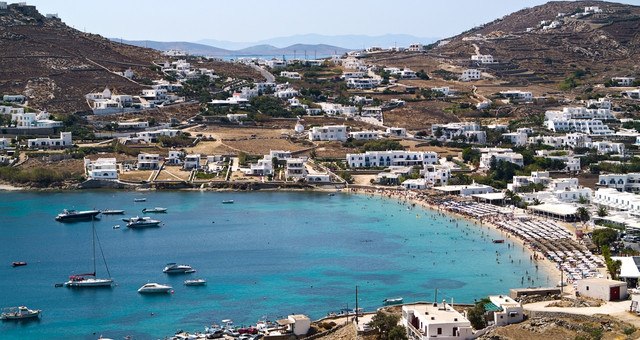 The picturesque sea village of Ornos

Some travel tips for your vacation in Mykonos: 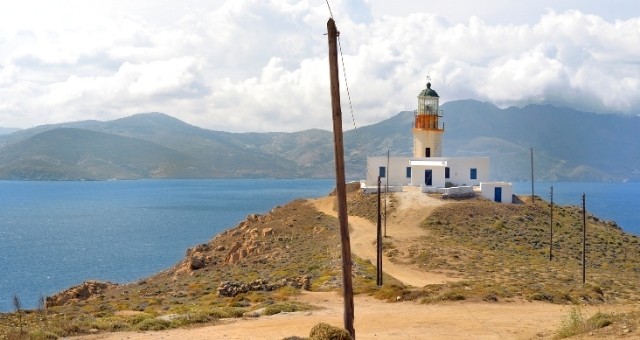 The majestic Armenistis lighthouse of Mykonos

Mykonos is a top destination for thousands of tourists each year, so it’s one of the most developed islands in the Cyclades. In the Old and the New Port, close to Chora, you will find everything you need for a comfortable stay on the island: supermarkets, shops, wineries, pharmacies, banks, and ATMs. In smaller villages, such as Ano Mera, you will also find a pharmacy, mini market, gas stations, and ATMs.

The island also has an international airport, located at a distance of 4 km from Mykonos Town.

In terms of accommodation, Mykonos offers a wide range of options to choose from, depending on your budget and vacation style:

Moreover, there are 2 camping sites in Mykonos, on the beaches of Paraga and Paradise, which are preferred by those who like to be at the heart of the party.

Useful phone numbers for your stay in Mykonos

Here are some useful contact numbers for your holiday in Mykonos:

Transportation is quite easy, as Mykonos has a good road network and frequent bus routes that connect Chora and the port with the airport, beaches and other points of interest. If you want to explore the island, we recommend bringing your own vehicle by ferry to Mykonos or renting one there.

If you can’t or don't want to drive, you can always use taxis or private vans. If you are looking for a VIP experience, Mykonos has a few concierge services.

Tip: Ferryhopper, in collaboration with Welcome Pickups, makes your transportation to and from the port of Mykonos easier and safer. Avoid taxi queues and extra charges and trust your ride to experienced drivers who know the island and its roads. Make a reservation and organize your trip to Mykonos in comfort and style.

Mykonos has 2 ports, the Old Port and the New Port. Both are located near Chora, at a distance of 1.5 km from each other. Most ferries to Mykonos from Piraeus, Rafina and the rest of the Cyclades are served by the New Port, in Tourlos. The Old Port, which is closer to Chora, usually serves smaller vessels.

However, weather conditions and maritime traffic might affect the availability of Mykonos ferry ports. Therefore, we recommend that you check with the local port authorities before your trip to/from Mykonos to confirm the port of arrival/departure.

Don’t forget that you can stay informed about schedule changes and track your ferry in real-time with the Ferryhopper App! 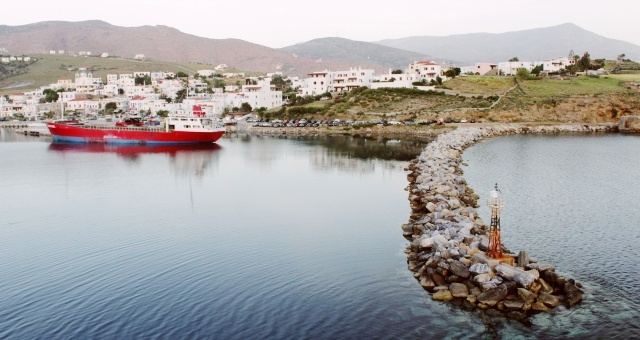 Ferry at the New Port of Mykonos, in Tourlos

Mykonos is located east of Tinos and Syros, north of Naxos and Paros and west of Ikaria, which makes it ideal for island hopping in the Cyclades. You can also easily reach the islands of the eastern Aegean and Crete with Mykonos ferries, operated by numerous companies.

Especially in summer, there are frequent ferries from Mykonos to nearby destinations and tickets are quite affordable. Mykonos is directly connected by ferry to the following ports:

If you feel overwhelmed with all the destinations you can visit by ferry from Mykonos, do not worry! On our Map of ferries, you can find all the available crossings from Mykonos, as well as indicative ticket prices for each route. This way, you can plan your island-hopping trip in the Greek islands in just a few clicks!

There is a regular ferry connection from Athens to Mykonos throughout the year, mainly with the ports of Piraeus and Rafina. The main ferry routes between Mykonos and Athens are:

If you want to go to Mykonos by ferry from Northern Greece, you can travel indirectly from the port of Kavala with a stopover in Ikaria or Samos.

Tip: see more details about your trip, including all the ways to travel to Mykonos!

Where to book ferry tickets online to Mykonos