Athens is the capital of Greece. A modern city with a rich history, impressive attractions, and beautiful neighborhoods. The 3 ports of Athens are ideal departure points to travel by ferry to the Aegean sea. On this page you will find useful information about the city of Athens, tips on what to do and where to go, as well as about its ports and popular ferry routes. 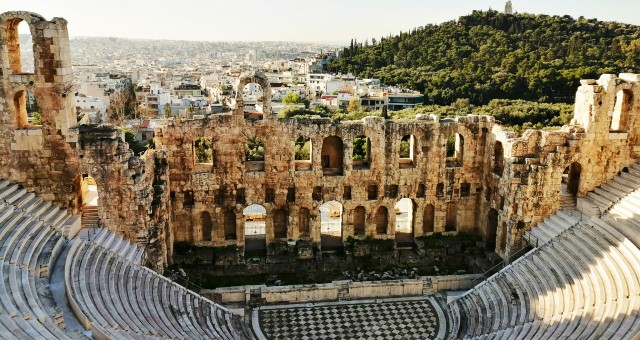 The Odeon of Herodes Atticus, an impressive Roman theatre in the center of Athens

Athens is a charming city and a great holiday destination. It’s ideal for vacation all year round as it has many attractions, cultural activities, shops, cafes and restaurants as well as a vivid nightlife.

We recommend strolling around the center of the city and exploring its historic neighborhoods of Plaka, Thiseio and Monastiraki. Go shopping in the classy Kolonaki, walk in the beautiful alleys that lead up to Lycabettus hill, and have a drink at the lively areas of Exarcheia, Pagrati, or Plateia Mavilis. Other popular and stylish neighborhoods for coffee, food, or drink include Koukaki, Petralona, Kypseli, or Metaxourgeio.

Apart from the center of the city, we recommend exploring the outskirts of Athens. Neighborhoods such as Kastela, Mikrolimano, Paleo Faliro, or Glyfada on the southwest coast are perfect for coffee, food, or walks with a sea breeze. In the areas of Psychico and Kifissia, north of the Athens center, you can find impressive old houses and luxury stores.

During the summer, the city of Athens hosts many festivals and open-air concerts. We suggest you take a look at the program of the Athens and Epidaurus Festival (June - July), the screenings of the Athens Open Air Film Festival (June - August) as well as the SNF Nostos Festival (June). It is also worth watching a performance or concert in one of the open-air theaters of the city, such as the Odeon of Herodes Atticus, the Lycabettus Theater, the Vrahon Theater, the Garden Theater in Papagou, the Petra Theater in Petroupolis, the Technopolis of Athens or the Veakeio Theater in Piraeus. 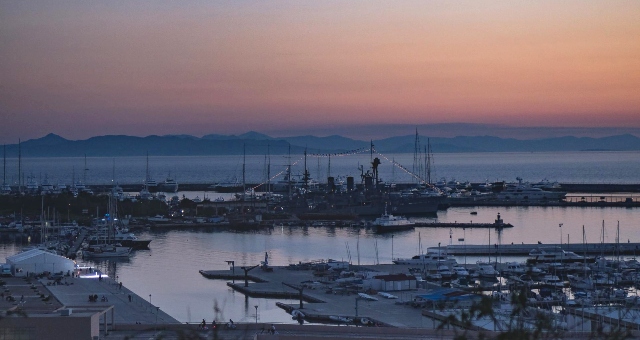 The marina of Paleo Faliro during sunset

The Attica region is surrounded by sea so the coast of Athens is long and there are numerous beaches for swimming. Many of the beaches of Attica have been awarded a Blue Flag for their quality. The distance of the beaches from the center of Athens ranges from 40 minutes to 1.5 hours by car. You can also reach the coast with the city buses or the long-distance bus network (KTEL Attikis). Ferryhopper suggests some of the best beaches in Athens according to their location: 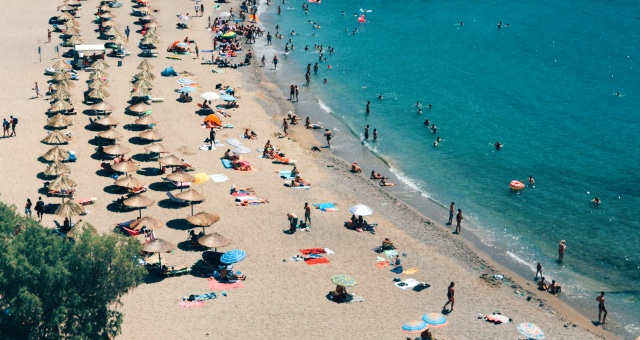 A typical summer day on a beach in Athens

Athens is a city with rich history and culture that dates to the 6th century BCE. The city is therefore full of museums, archeological sites and monuments, an ideal destination for lovers of art and culture. The Acropolis rock and the Parthenon are the trademarks of the city of Athens and they are surrounded by numerous impressive sites and historic neighborhoods. Strolling around the city of Athens is an amazing trip through history.

Some of the top sights and monuments in Athens:

Some of the most beautiful museums in Athens that are worth visiting: 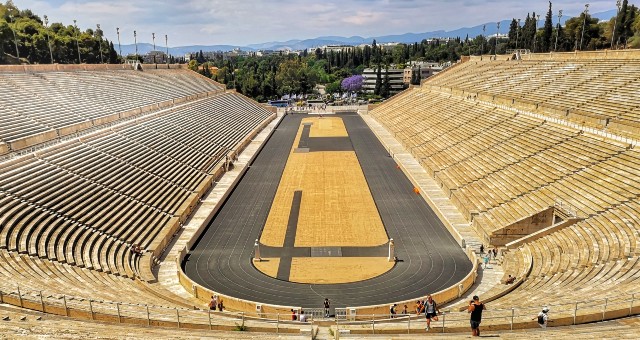 How to get to Athens

The center of Athens is connected to the motorways and primary roads as well as the airport through the toll motorway of Attiki Odos (A6). You can also travel to Athens from the rest of the country by plane as there are numerous domestic routes, as well as by bus, train and ferry.

The central railway station of Athens is Larissa Station located in the city center, in Metaxourgio. Athens also has 2 intercity bus terminals, the Kifissos station (on Kifissos Avenue) and the Liosion station (26 Stratigou Dagli street, in the area of ​​Treis Gefyres). Both bus stations are connected by public transport to the city center, the ports and the airport of Athens.

The Athens International Airport Eleftherios Venizelos is located in the area of ​​Spata, about 35km from the center of the city. The airport opened in 2001 and serves over 25 million passengers every year. The city airport is accessible by metro (blue line) and suburban railway, as well as by bus routes from the city center as well as the port of Piraeus. Access to the airport by car is possible via Attiki Odos (direction Markopoulo).

For accommodation, Athens has numerous hotels, rooms, apartments and hostels depending on the area you prefer to stay in, the type of accommodation, and your budget.

If you want to explore the city center and be close to shops and attractions, then we suggest booking a room in one of the hotels in the wider areas of ​​Syntagma, Monastiraki, Thiseio, Koukaki, Kolonaki, Lycabettus or Pagrati). Also, if you want to be close to the port, there are many hotels in Piraeus.

If you prefer to be close to the sea, you can find hotels on Poseidonos or Syngrou Avenue. If you do not mind being away from the city center, then there are several options in the southern suburbs of Athen, such as: Glyfada, Voula, Vouliagmeni, Lagonisi and Sounio. If you want to be closer to the port of Rafina then we recommend staying on the east of the region in areas such as Porto Rafti, Artemida, Nea Makri, Rafina, or Marathon / Schinias.

Important numbers for your holidays in Athens

Here are some useful contact numbers for your stay in Athens:

Which are the ports of Athens?

The city of Athens has 3 ports: Piraeus, Rafina, and Lavrion. All the ports serve daily ferry connections to the islands of the Aegean sea. In the summer months, the ports’ traffic increases significantly with more than 20 million Greek and international travelers departing by ferry from Athens for their summer vacations. Most ferries depart from the port of Piraeus, but for some destinations (such as the northwestern Cyclades and the islands of the north Aegean) it is more convenient to depart from Rafina or Lavrio.

You can find more specific details about each of the ports and how to get there below:

You can find more information about the 3 ports of Athens, the access, ferry locations, parking and available facilities on our destination pages. 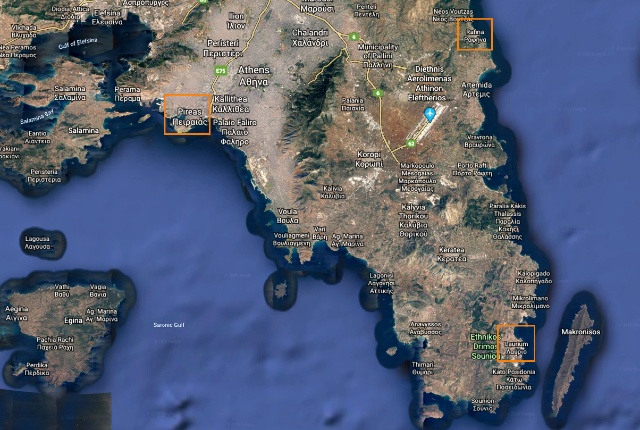 Ferry routes from the ports of Athens

The ports of Athens have regular ferry connections with all the Aegean islands, Crete and Kythira throughout the whole year. Choosing your port of departure depends on the destination, the available ferry connections, the duration of the trip, the ferry company as well as whether you have a vehicle or not. We collected a few useful tips about the ferry routes from the 3 ports of Athens:

Ferry from the port of Piraeus

The port of Piraeus is the most popular among travelers, as it is easily accessible and serves many destinations. Ferries to the islands of the Saronic Gulf, the Dodecanese and Kythira depart exclusively from the port of Piraeus. From Piraeus you can travel directly by ferry to the following destinations:

Ferry from the port of Rafina

The port of Rafina is the best option if you are traveling to the northern Cyclades or if you are flying to/from the airport of Athens. 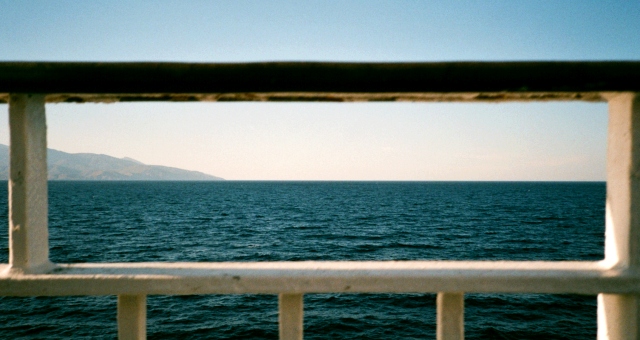 Ferry from the port of Lavrio

Due to its location in the southern tip of the Attica region, the port of Lavrio is the best choice if you want to travel to the western Cyclades. There are frequent ferry routes from Lavrio to Kea (Tzia) or Kythnos all year round and the ferry trip is short. The port of Lavrio also serves regular ferry connections from Athens to destinations of the north Aegean such as Chios, Lemnos and Kavala.

During the summer months, there are ferry routes from Lavrio to central and south Aegean islands such as Syros, Naxos, Milos, Kimolos, Folegandros, Sikinos and Ios. 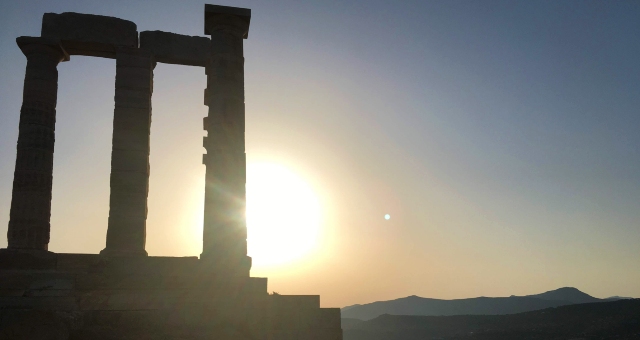 Sunset at the Temple of Poseidon in Sounio, just 9km (15 minutes drive) from the port of Lavrio

On the Ferryhopper Map of ferries, you can find all the available ferry connections from the ports of Athens, to organize your trip to the Greek islands easily and quickly. And if you're looking for the top day-trips from Athens, we've also got you covered!

Where to book ferry tickets online from Athens

On Ferryhopper you can find all ferry connections from the ports of Athens! Compare ferry routes, schedules, ferry company and ticket prices, and book ferry tickets for your favorite island online in just 4 clicks.