Kavala is a beautiful city in northern Greece and the main port of eastern Macedonia. From the port of Kavala, you can travel by ferry to the islands of the northeast Aegean Sea, the Cyclades as well as to Athens. Book ferry tickets online from Kavala on Ferryhopper in just 4 clicks! 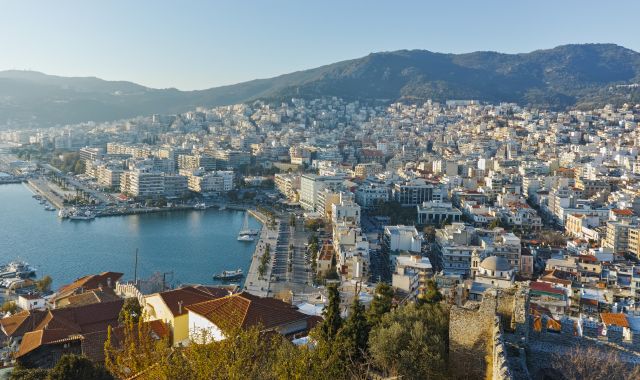 The port and city of Kavala from above

The port of Kavala is one of the most important ports in northern Greece, and it serves about 100.000 passengers every year.

The passenger port of Kavala “Apostolos Pavlos” has 2 gates with a total of 7 ramps for passenger ferries and 1 ramp for cargo ships. The port is located about 1km from the center of the city so it is easily accessible on foot as well as by car.

From the port of Kavala, you can travel by ferry to the islands of the northeast Aegean Sea, the Cyclades as well as the port of Lavrion in Athens. There are also frequent ferries from Kavala to the nearby island of Thassos.

The port authority of Kavala also includes the passenger port of Keramoti. Located 42 km east from the city of Kavala, Keramoti is a small port and coastal town that serves daily ferry routes to Thassos.

Ferry routes from the port of Kavala

Kavala is one of the main getaways from northern Greece to the islands of the Aegean sea. From the port of Kavala, you can travel by ferry to the island of Lemnos in just 4 hours, to Agios Efstratios in 7 hours, to Lesvos and Chios in about 9 to 10 hours. There are also regular ferry routes from Kavala to the islands of East Aegean (Samos, Ikaria, and Fournoi) and the journey lasts from 13 to 20 hours depending on the itinerary.

From the port of Kavala, you can also travel directly or indirectly to the Cyclades and more specifically to Mykonos or Tinos. There is also a direct ferry from Kavala to Athens and the port of Lavrion.

The ferries from Kavala usually have a garage for the transfer of vehicles, as well as bed cabins for a more comfortable journey.

Check our interactive Map of ferries and find all the available ferry crossings from Kavala and read more about the most popular ferry routes from Kavala on our pages.

Ferry from Kavala to Thassos 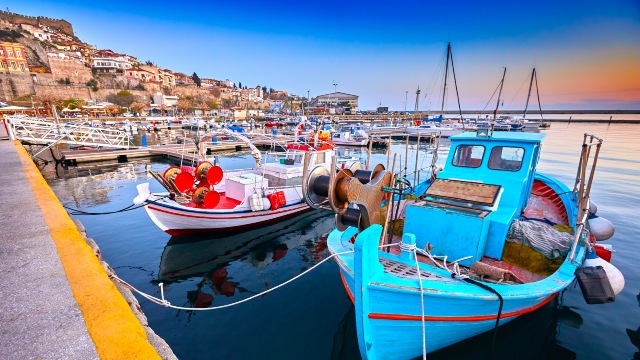 Afternoon walk at the promenade of Kavala

How do I get to the port of Kavala?

Kavala is a coastal city 150km east of Thessaloniki and about 650km away from Athens. You can get to Kavala either by road via the highway of Egnatia Odos or by bus from Thessaloniki and Athens. More specifically:

The international airport of Kavala “Alexander the Great” is located closer to the port of Keramoti, about 30 km from the port and city of Kavala (30 min ride).

Parking at the port of Kavala

There is an outdoor parking lot with a fee a few meters away from the departure gates at the port of Kavala. The prices start from 2€ for a period of 1 το 6 hours.

In the city center of Kavala, there are controlled parking zones, where parking is allowed during the opening hours of commercial stores with a parking card. You can buy the cards in local stores or the Visitor Information Center in Eleftherias Square. When the shops are closed, parking in these zones is free. 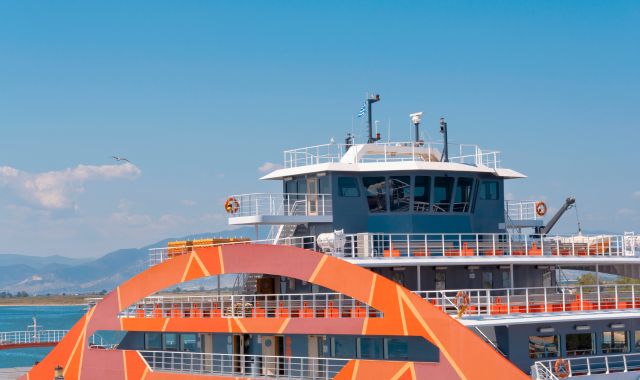 Useful info and travel tips for the port of Kavala

Kavala is the 4th largest city in Macedonia, a modern city with developed tourist infrastructures. In the center of the city and near the port you can find banks, gas stations, pharmacies, supermarkets and a hospital. There are also shops, restaurants, cafeterias and bars within walking distance from the port piers.

The Central Passenger Station of the port of Kavala is located at Gate 2, where you can find cafeterias, snack bars, travel agents and toilets. There are also bus stops outside the passenger stations that connect the port with the city and the central bus station.

Here are some useful contacts for your stay in Kavala:

Tip: When you book your ferry tickets online from Ferryhopper, you’ll receive detailed information about the ticket collection points at the port of Kavala.

Kavala is a popular holiday destination in northern Greece. It is a city with a rich history, and numerous attractions, while the combination of the sea and the lush mountains creates an impressive landscape. In the city of Kavala as well as surrounding areas, you will find beautiful beaches and coastal areas. 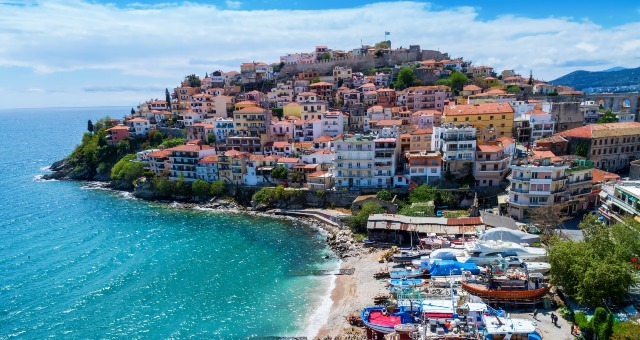 The charming old town of Kavala on the peninsula of Panagia

In Kavala you will find 4 beaches that are within walking distance from the center of the city. If you are looking for quiet time by the sea, there are several secluded coves a few kilometers outside of the city. Some of the best beaches near Kavala are: 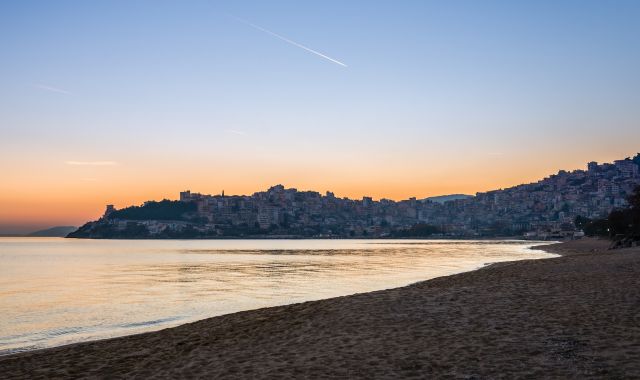 Beautiful sandy beach close to the city of Kavala

Kavala has many places of historical interest and it has a vivid cultural life. Apart from monuments of the Ottoman Period, the city is famous for its old tobacco warehouses. We also recommend visiting the archaeological site of Philippi, which has been declared a UNESCO World Heritage Site and is located a few kilometers outside the center of Kavala.

Some of the top sightseeing suggestions for Kavala are:

Tip: Every July and August, the city of Kavala hosts the Philippi Festival and the Cosmopolis Festival. The festival program includes concerts, performances and traditional feasts! 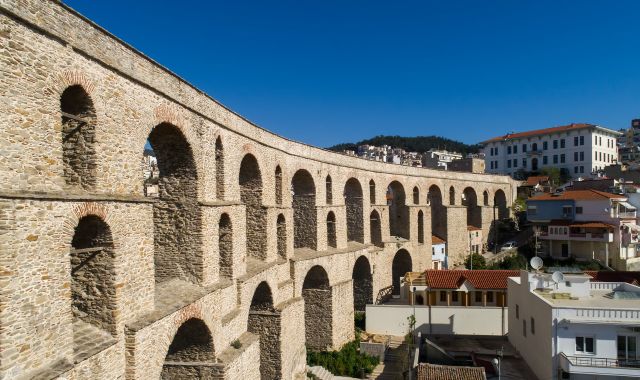 Where to book ferry tickets online from Kavala

On Ferryhopper you can book ferry tickets from Kavala online at no extra cost. Compare all ferry routes, schedules, companies, ticket prices and book your ferry trip from Kavala at the best prices!