Sicily is the largest island in the Mediterranean Sea and attracts travelers from all around the world.

On Ferryhopper, you can find useful information about ferries from Sicily, must-see places, beaches, and local delicacies. Take a look at all ferry routes from Sicily and book your ferry tickets with just a few clicks!

Read our suggestions for your trip and find useful information about its ports: 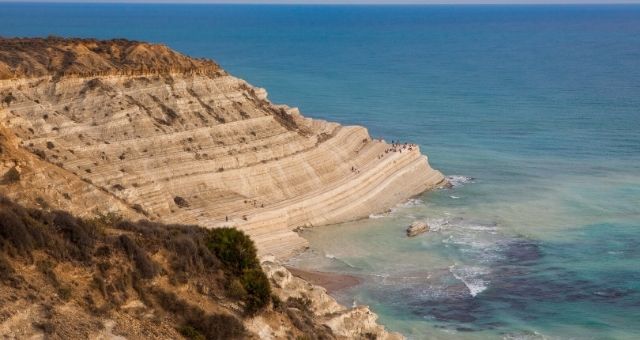 Sicily is a colorful mosaic that can meet the expectations of any traveler. Thanks to its landforms, hiking and swimming holidays can be easily combined here.

Between nature, art and culture, Sicily offers a variety of natural wonders: pristine beaches, volcanoes and wonderful seaside villages. Well-known for its baroque architecture, traditions and hospitality, Sicily continues to seduce travelers with its diversity.

The crossings for Sicily are frequent and you can also plan a road trip to reach all its ends or travel to the Aeolian and Egadi Islands! Thanks to its mild climate all year round, you can also enjoy the beauty of Sicily out of season.

How to get to Sicily

Sicily is well-connected with other parts of Italy and is easily reachable by ferry, plane or train.

If you want to travel to Sicily from the south of Italy, all you have to do is reach Villa San Giovanni in the region of Calabria and then take the ferry to Messina.

There are also ferry connections to Sicily from Naples, Salerno, Civitavecchia, Genoa, Cagliari, Malta, and Tunis. The ferries arrive at the main ports of Sicily, including Palermo, Messina, Catania, Trapani, Porto Empedocre, Milazzo, and the ports of its archipelagos.

Sicily has also 6 international airports that connect it to major cities in Italy and Europe.

You can find more information about Sicily ferry schedules and tickets here. 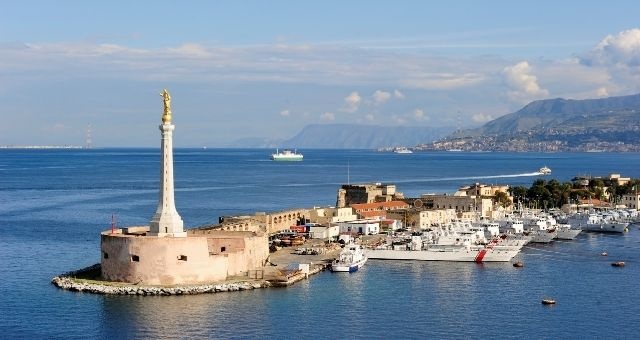 View of the port and city of Messina

What to do in Sicily

One of the most important places is the island's capital, Palermo, with its historic buildings, old churches and local markets. Discover Catania at the foot of Mount Etna, Syracuse and the charming island of Ortigia on the eastern coast. Don’t leave Sicily without visiting the Valley of the Temples in Agrigento, the Theater of Taormina and its baroque villages.

What makes Sicily stand out is its crystal-clear waters! Dive into the sea of San Vitro Capo in Mondello, admire the Scala dei Turchi or enjoy a daily excursion in the Sicilian archipelago!

Sicily has also a stunning scenery for outdoor activities. If you like nature and trekking, you can wind along precipitous coastlines, climb Etna and enjoy some of the Mediterranean's most pristine waters.

Exploring Sicily off-season is a unique experience that gives travelers the chance to visit the hinterland, taste local products and (why not?) try skiing in Etna!

With a 1,500km coastline, Sicily is an ideal location for sea-lovers. The variety of beaches is impressive and picking the most beautiful one is a difficult task.

Here are the best 10 beaches of Sicily: 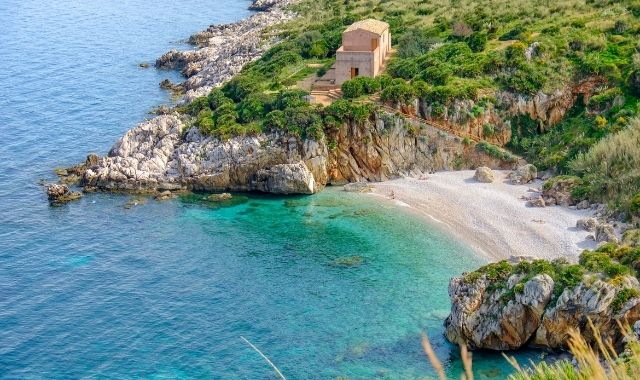 Sicily is among the most beautiful and fascinating regions in Italy that will surprise you with its archaeological sites, picturesque cities and breathtaking views.

Here are some cultural and natural attractions that we recommend you don`t miss:

The best cultural attractions in Sicily 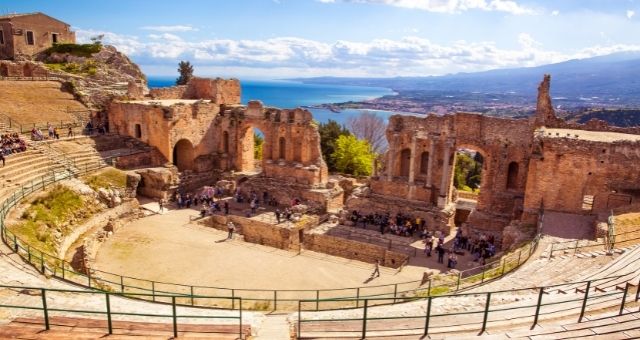 The ancient Greek Theatre of Taormina

The best natural attractions in Sicily 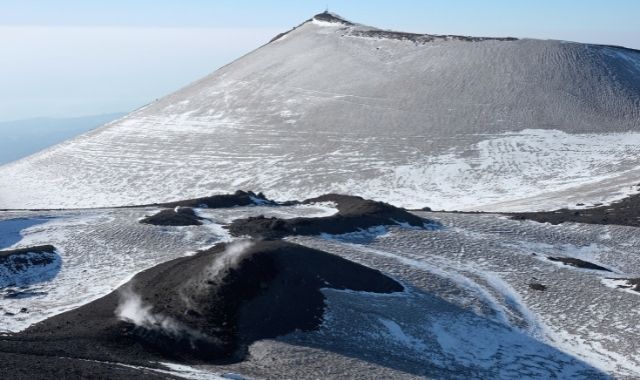 The extraordinary landscape of Etna Park

Aside from its natural wonders, Sicily has a vibrant nightlife.

Taormina is a popular summer destination for travelers who want to combine beach life and nightlife. Catania and Marina di Ragusa are also considered among the most lively cities in the Mediterranean. The waterfront is transformed into a disco, frequented by a large number of young people.

Marsala is also well-known for its attractive historic center. On the other hand, Palermo, as a year-round destination, offers a wide range of options: from dinners at the market Ballarò to fancy cocktails at Viale della Liberta.

In the Mondello area, just 11km from Palermo, you can enjoy a thriving nightlife, especially during summer. The seaside town of Cefalù is known for its promenade, which is enlivened by many bars, clubs and beach parties.

Panarea, the smallest of the Aeolian Islands, is a popular destination for young people, offering 24-hour entertainment between boat parties and trendy clubs.

Sicily's gastronomic heritage is among the richest in the Mediterranean. Food holds a special place in Sicily and is steeped in tradition.

Most of ingredients are produced locally and have a unique taste. If you have a sweet tooth, Sicily is the place to be, as its sweet pastries are well-known for their simple, lemon-like flavor!

Here are the delicacies we suggest you to try during your vacation:

Fun fact: the Italian Mint and Printing Institute decided to imprint the cannolo and the passito, two of Sicily's most well-known symbols, on the €5 coins of the 2021 numismatic collection! 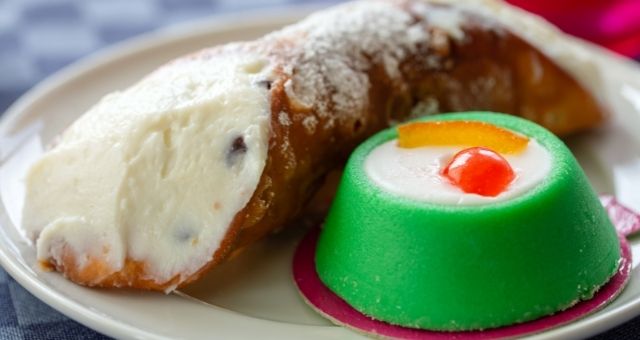 Cannolo and cassata, the absolute protagonists of the Sicilian gastronomy

Here are 6 tips that we hope will be helpful to you before your trip to Sicily:

Sicily is a region that provides a wide range of services and options, depending on the type of vacation you are looking for.

If your dream vacation combines long days at the beach and intense nights, head to western Sicily, in Trapani. Palermo on the other hand is a crossroad of cultures that will surprise you with its rich cultural heritage, while provides all the modern facilities of a capital. Starting from Palermo you can also easily travel east to Cefalu, Bagheria and Nebrodi Park.

Throughout the year, Sicily hosts a variety of events and festivals that are worth seeing. Except for the famous carnival of Acireale and the Cous Cous festival of San Vito Lo Capo, Noto's Infiorata (flower decorations in the main streets of Noto), Cefalù's Bread Festival and the Feast of Sant’Agata in Catania stand out.

Important phone numbers for your stay in Sicily

Here are some useful contacts to keep handy when you travel to Sicily:

The best way to explore Sicily is by car. If you do not get your own vehicle, you can always rent one at one of the various rental locations.

If you don't want to drive, you can choose between the SAIS, Etna Trasporti and Interbus bus routes that connect the major cities. Trains are not the most convenient mode of transportation, so they should only be used as a last resort.

In the city center, you can move around by taxi. If you decide to catch one, we recommend that you confirm the price in advance to avoid unpleasant surprises

Palermo and Trapani are the most important ports in northwestern Sicily. In terms of size and passenger traffic, Palermo has one of the largest ports in the Mediterranean. The Sicilian capital is connected year-round to Naples, Salerno, Livorno, Civitavecchia, and Genoa, while during summer there are ferry connections with the Aeolian Islands and Ustica. Trapani, on the other hand, is the main port for visiting the Egadi Islands, Pantelleria and France.

At the western end of Sicily, there is the port of Marsala, which is connected daily with the nearby Egadi archipelago.

In the southeast, the port of Pozzallo is one of the most important in Sicily and the largest in the province of Ragusa, located only 90km from Malta. Porto Empedocle is also an important port in southwestern Sicily, connected to the Pelagie Islands (Lampedusa and Linosa). 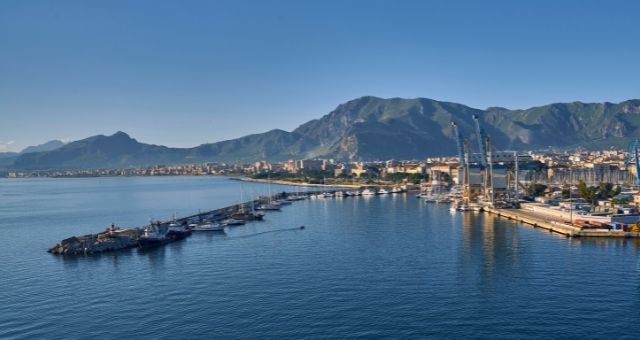 The bustling port of Palermo

From the ports of Sicily, you can travel to the Aeolian Islands, Egadi Islands, Pelagie Islands, Ustica, and Pantelleria.

Here's some additional information about them: 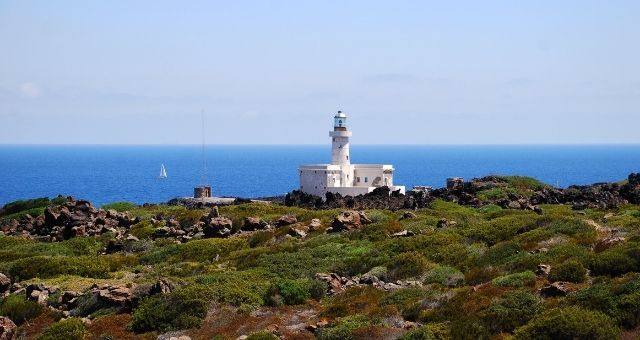 The fascinating lighthouse of Punta Spadillo, in Pantelleria

Most routes to Sicilian ports operate all year round, while there are more frequent departures during summer.

There are several connections to Sicily departing from the north, central and south ports of the Italian peninsula. Malta is also well-connected with the Sicilian ports of Pozzallo and Augusta (in the province of Syracuse). From the port of Tunis you can reach Sicily through year-round connections to Palermo. Moreover, Sicily is connected with seasonal routes to the port of Toulon (France).

Here you can find more information about all the ferry connections:

On Ferryhopper, you can book tickets to Sicily and other Mediterranean destinations. Find all the information you need about ferry schedules from the port of Sicily, check our Map of ferries for the available ferry crossings, compare companies and book ferry tickets online at no extra cost!