Amorgos is a beautiful island of the Cyclades, located in the east of the complex. It is the largest island of the Small Cyclades (or Mikres Kyklades) with many ferry routes among them. Also, Amorgos is an ideal summer destination for travelers who seek beautiful beaches, tasty food and relaxing holidays. If you want to know more about Amorgos or plan a visit to this charming islands, check the Ferryhopper pages and find all information about ferry routes and schedules.

Ferry schedules and tickets to Amorgos

Amorgos is well connected to Piraeus and Naxos with regular and highspeed ferries (during high season). There is also a frequent ferry connection to Paros, Syros, and Astypalaia, while during the summer Amorgos is also connected to Mykonos, Ios, Sikinos, Folegandros, Milos, Kimolos and other islands. Amorgos is the main port for the legendary ferry of Cyclades "Express Skopelitis", which connects Amorgos to Naxos and the rest of the Small Cyclades (Donousa, Schinoussa, Iraklia, and Koufonissia).

Amorgos island has two ports: Aegiali and Katapola. Both ports are connected to Athens, with ferry itineraries all through the year. Blue Star Ferries normally serves the route Piraeus-Katapola and Piraeus-Aigiali almost every of the week, during low season.

Aegiali is a beautiful village in Amorgos with great sandy beaches and amazing beach bars. It is further from Chora than Katapola and there are many departures during summer to nearby islands like Donousa, Irakleia, Koufonisia, Schinousa and Astypalaia. Katapola is a small village close to Chora and the port is connected with dense itineraries, during high season to nearby islands like Koufonisia, Naxos, Paros, Donousa, Schinousa, Irakleia and Astypalaia. For more information on ferry schedules between Athens and Amorgos, you can check the ferry routes from Athens to Amorgos and from Amorgos to Athens. What to do in Amorgos

The most lively places of Amorgos are Chora, Katapola and Aegiali. However, you should definitely visit some of the several beautiful villages like Lagada, Tholaria, and Arkesini. However, the key feature of Amorgos is its extraordinary beaches with crystal clear water and some of the most legendary beach bars of the Cyclades. Apart from its stunning nature, Amorgos is well known for its local festivals and its vibrant nightlife, especially in Chora and Aegiali.

Introducing the beaches of Amorgos to the international travelers is quite easy since its beautiful sea has played a key role in the French movie "Le Grand Bleu"  ( aka"The Big Blue"). Some of the numerous beaches in Amorgos are:

When speaking about nightlife Mykonos, Paros, Ios or Crete are the first islands that come to mind, but Amorgos is also one of the best! There are many beach bars at Aegiali, like Ammos Beach Bar and the Disco Q. You can drink coffee or fresh juices, during day time, literally on the beach. When the night comes there is great music and drinks...and the perfect atmosphere for dancing at the sand! Aegiali is not the only place for nightlife in Amorgos! Chora has many little bars like Yasemi or Botilia with amazing indie or rock music (sometimes live, during summer) that are definitely worth a visit.

Amorgos nature is amazing and if you wear enough sunscreen, sunglasses and hats you can explore it by the 7 main paths that are marked with white and red signs around the island. There are hiking tracks for all levels of difficulty so that everyone can admire the breathtaking views and rocky sceneries. The most famous walking paths in Amorgos are:

More information for the path network in Amorgos you can find here. 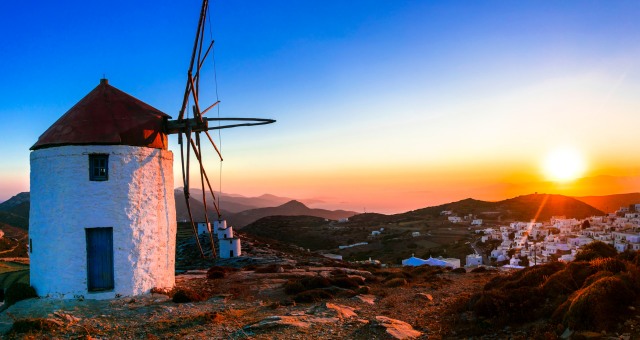 There many villages around Amorgos island. To visit all of them you definitely need a mean of transportation. This could be a car or the KTEL (public transportation) which itineraries are pretty dense during July and August. The most famous regions of Amorgos are Aegiali, Katapola and Chora, but there are also some picturesque villages like:

As soon as you get to Amorgos, you will feel the vibe of the sunny sea that extends around the rocky terrain. This combination of rocks and sea gives you the opportunity to try different activities enjoying the natural beauty of the island and its deep local traditions.

Travelers that like hiking will get thrilled by the breathtaking paths that lie on the edge of the rocks. To be sure that you find a trail that fits you, you can join the well-organized walking tours in Amorgos, provided by FindInGreece . Apart from hiking, you may also like to collect Amorgian herbs, go on fishing trips or even make your own traditional pottery. If you want, even more, check all the activities in Amorgos.

If you visit Amorgos during July and August, you should definitely not miss the traditional fests that are held in its picturesque villages all around the island. In 25th and 26th of July, fests are held in Kato Meria and in Katapola. On the 6th of August, a big fest is held in Chora. People are gathered in Loza square where spontaneous traditional dances spark under the songs of local musicians. Around the 15th of August, fests are held in Lagada, just above the port of Aegiali. All the taverns have live music and people are strolling around and dancing under the sounds of Aegean and Greek music. Amorgos has a Health Center in Chora and a Regional Medical Center in Aegiali, Arkesini and Katapola. Also, you can find ATMs in Aegiali , Chora and Katapola as well as Supermarkets. There are gas stations throughout the island and there are several structures for organized camping. The two most famous campsites on the island are the camping in Katapola and the camping in Aegiali. Camping is very popular with Amorgos guests, so make sure to check availability before traveling! Some useful telephone numbers for your vacation in Amorgos:

Where can I book ferry tickets to Amorgos?

Book online ferry tickets for Amorgos easily. in a few steps! Search with the Ferryhopper search engine for schedules, compare ferry companies and prices and take the ferry to Amorgos as soon as possible!

Back to all destinations