Thassos is a green island with magical beaches and a rich tradition. The Greek island of the North Aegean Sea is famous for its natural beauty, emerald waters and quaint villages. On this Ferryhopper page, you can find all the information you need about vacation on the island of Thassos, the best beaches, food and accommodation, as well as ferry tickets and schedules. 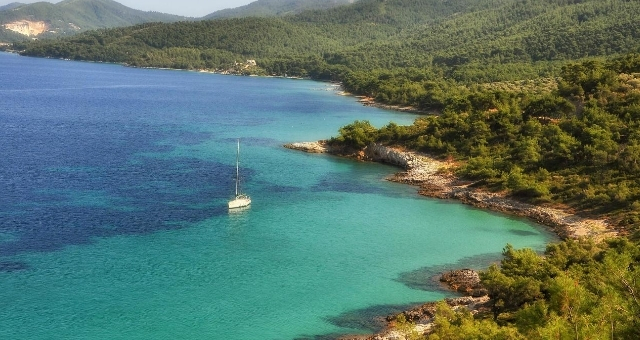 Beach in Thassos with turquoise waters and lush vegetation

Thassos is close to the coast of Eastern Macedonia in Greece. It is located a few miles off the coast of Kavala. The island is mountainous and untouched, perfect for nature lovers and adventure enthusiasts. Its lush greenery and impressive landscapes make travelers fall in love with the island. Pine and fir trees, waterfalls, golden sand beaches and turquoise waters create a heavenly setting.

Thassos is also famous for the beautiful villages and numerous archaeological sites. Don’t miss out on the delicious local delicacies of the island and the lively nightlife. During your holidays in Thassos, you can relax, drink and dance at bars and clubs, taste amazing dishes and try outdoor sports!

How to get to Thassos

Ferries to Thassos depart from the ports of Kavala and Keramoti in northern Greece. The route from Kavala to Thassos lasts 1.5 hours, while the Keramoti - Thassos sailing duration is less than 1 hour.

What to do in Thassos

When in Thassos, you can try water sports such as waterskiing and windsurfing, swim in beautiful beaches and reinvigorating waterfalls, as well as try delicious local dishes in one of the many local restaurants and traditional Greek coffee shops. Find the best vacation experiences in Thassos below.

The beaches of the island have emerald green waters and there are many remote and popular spots to choose from. There are sandy, pebble and rocky beaches with tall trees and shrubs, where you can enjoy the peace or try water sports. Here are some of the most charming beaches in Thassos: 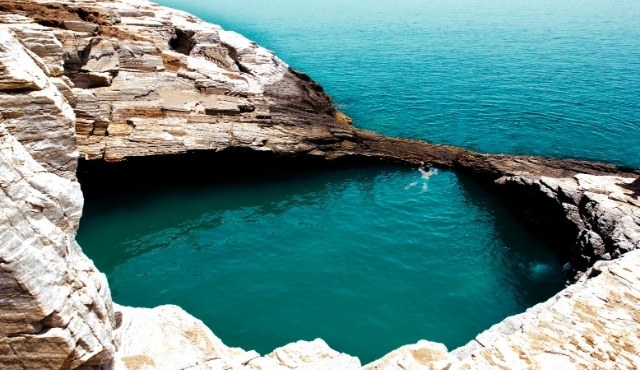 The impressive natural lagoon of Giola in Thassos

Thassos has a rich ancient history and there is an abundance of archaeological sites and cultural attractions on the island. Here are some of our favorite cultural experiences in Thassos: 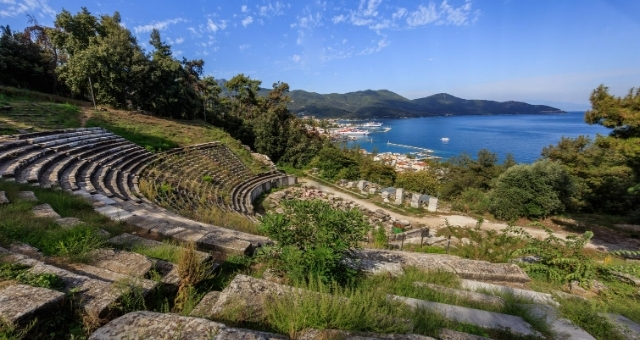 The ancient theatre of Thassos with an awe-inspiring sea view

Holidays in Thassos is all about nature exploration and outdoor sports! You can hike through impressive seaside forests, climb to the top of green hills, and conquer the waves of the Aegean Sea. Ferryhopper suggests 5 of the best activities in Thassos: 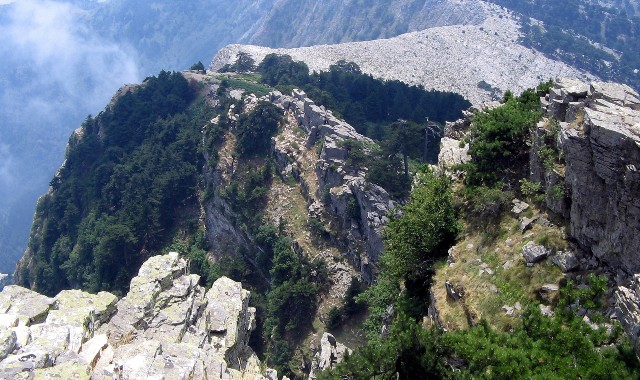 Ipsario: the highest peak on the island of Thassos

The island of Thassos is famous for its picturesque villages. Stroll around the seaside and mountain villages of the island to admire the local architecture, take amazing pictures of the sublime nature and try mouthwatering local dishes at the traditional tavernas. Here’s a list with some of the top villages to visit in Thassos:

Thassos is famous for its local products of exquisite quality since ancient times. Don’t leave the island without trying some of the delicious local delicacies. Ferryhopper suggests that you try:

There are restaurants, bars and clubs all over the island. Although Thassos is not the typical party island, there are many entertainment opportunities. Popular nightlife venues are mostly located in the largest villages of the island like Limenas, Potos, Skala Potamias and Golden Beach. If you’re looking for a more traditional Greek night-out, there are amazing little bars and kafeneia in the mountain villages that stay open until the early morning hours.

You can also attend music festivals and live events particularly during the summer months. There are jazz nights, DJ sets, electro nights and many more events for music lovers. Most of the clubs and venues are located either on the beach or at the main pedestrian streets of the villages. 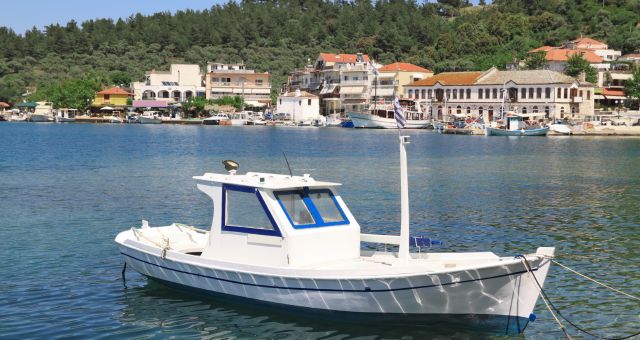 Sunny day at the beautiful port village of Limenas in Thassos

Thassos is a large island with all necessary visitor amenities. In Limenas, the capital of the island, you can find banks, ATMs, medical centers, supermarkets, gas stations, shops, pharmacies, restaurants, cafés, as well as a post office and a Citizen Service Center. There is a health center in Prinos, as well as regional medical centers in more villages on the island. Potamia, Limenaria and Prinos are also visitor-friendly with several facilities for travelers.

If you’re searching for accommodation in Thassos, you can find a plethora of options from luxury hotels and villas to rental rooms and organized camping. Visitors mostly stay in the following villages: Limenas, Potamia, Kinira, Potos, Limenaria, Aliki, Glifoneri and Chrissi Amoudia.

Useful phone numbers for your stay in Thassos

Here are some useful phone numbers for your holidays in Thassos:

There are both paved and dirt roads in Thassos and it’s quite simple to get from A to B by private vehicle. If you’re not driving on the island, you can use the public bus service connecting Limenas with the major villages and the island’s popular beaches or catch a taxi. There are also some bus routes to less touristic villages on the island. You can find car and motorcycle rentals at the ports and the largest villages. 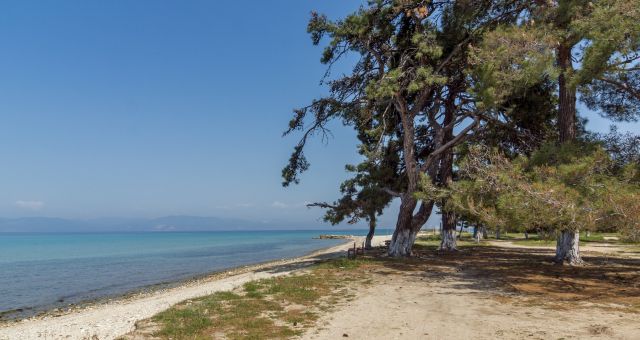 The remote beach of Ormos Prinou by the port

You can travel by ferry to Thassos from northern Greece. Ferries depart from the ports of Keramoti and Kavala to Thassos all year round.

How to get to Kavala and Keramoti

Tip: Bear in mind that there is no direct public bus service to the port of Keramoti from Athens, Thessaloniki and Drama. To get to Keramoti by public bus, you need to travel through Kavala. Buses from Kavala to Keramoti are available more than 10 times per day. 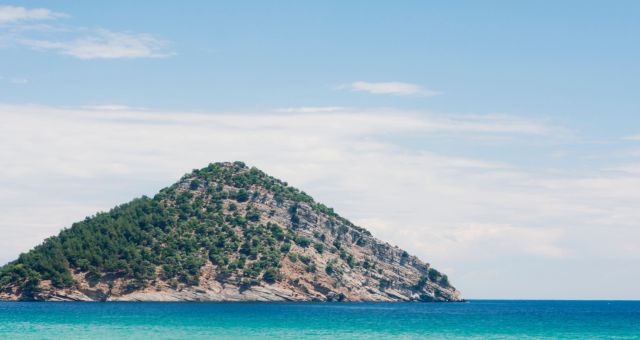 Serene islet off the coast of Thassos

Where to book ferry tickets to Thassos

You can only book ferry tickets to Thassos at the ports of Kavala and Keramoti. There are also ticket offices at both ports on the island, but it is not possible to book online. Make sure you arrive at the port early so that you purchase your ticket. Read the Ferryhopper guide, find the best experiences in Thassos and plan your next vacation!