Kalymnos is one of the most popular destinations in the Dodecanese. The Greek island is famous for its natural sponges and it’s also a favorite among rock-climbing and bouldering enthusiasts. Kalymnos charms visitors with its amazing rock formations, dreamy beaches and ancient monuments. On this Ferryhopper page, you can find more information about holidays in Kalymnos, the best sights and beaches on the island, ferry routes and schedules, as well island hopping in the Dodecanese. Find what to do on the island and book cheap ferry tickets on Ferryhopper in just 4 clicks! 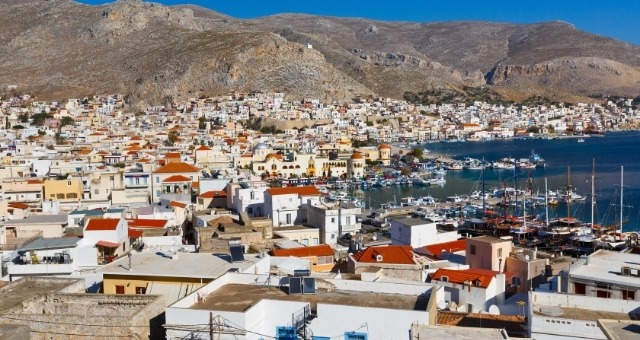 The beautiful port of Kalymnos

Holidays in Kalymnos are all about the beautiful sea and the impressive rocks! The wild beauty of the island has made it one of the most visited in the Aegean Sea for nature-lovers. Still retaining its unspoilt character and island traditions, Kalymnos is the perfect destination to relax, try outdoor activities, swim in crystal-clear waters and try scrumptious dishes. In Chora (or Pothia) the capital of Kalymnos, as well as more villages around the island, you can find monuments of great historical significance and plenty of entertainment and dining options.

How to get to Kalymnos

You can get to Kalymnos by ferry from the port of Piraeus in Athens throughout the year. There are frequent weekly crossings with an average sailing duration of 10.5 hours. You can also fly from abroad to the islands of Kos and Rhodes and catch a ferry to Kalymnos from there. Find more information about how to get by ferry to Kalymnos below.

What to do in Kalymnos

During your stay in Kalymnos, you can try fresh fish at the seaside tavernas, get an adrenaline rush by going rock-climbing, swim in beautiful beaches and enjoy the sunset, as well as explore the caves of the island. There are many villages to visit, as well as plenty of hiking trails and ancient monuments around the island. Moreover, we recommend that you take a day trip to the neighboring island of Telendos, 8 minutes by water taxi from Kalymnos. Find the best beaches, sights, activities and experiences in Kalymnos below.

There are many beaches for all tastes in Kalymnos. There are sandy and pebble beaches, secluded coasts and popular seaside resorts with visitor amenities. All beaches have crystal-clear blue waters and they are ideal for relaxation. Here are some of our favorite beaches on the island:

The beautiful Mirties beach overlooking the island of Telendos

Kalymnos is an island with a long history, being inhabited since prehistoric times. There are many archaeological treasures and sites of historical interest on the island. You can also visit the museums of Kalymnos to get a better understanding of the island’s past and traditions through the impressive exhibits. Here’s what to see in Kalymnos:

Apart from cultural and historical sightseeing, there are also many outdoor activities to try in Kalymnos. We recommend that you visit all 16 caves on the island or try the most popular ones such as Kefalas, Seven Nymphs (also called Seven Virgins) and Skalia.

Moreover, Kalymnos is considered as one of the best destinations in the world for rock climbing! If you’re a fan of adventure and you reckon yourself an experienced climber, there are plenty of limestone rocks to conquer in Kalymnos. If you’re just starting out or you want to learn more about climbing and bouldering, you can find climbing schools and tours, or attend the Climbing Festival that takes place every year around September or October.

Tip: One of the best things to do in Kalymnos is to attend the Diving Festival and explore the ancient sunken city bewteen Kalymnos and Telendos! 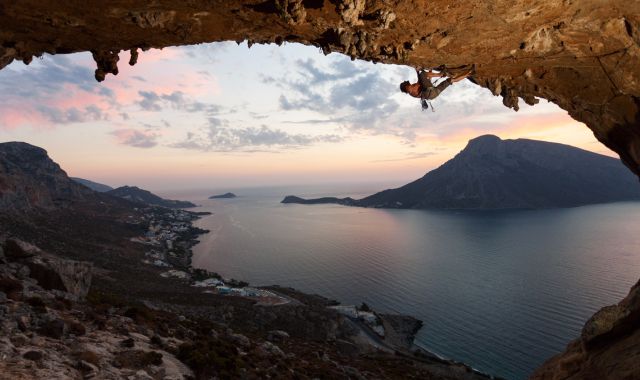 Kalymnos is lively all day and night long! Although it is not a clubbing island, locals and visitors know how to have fun! When the night falls, the bars, restaurants, all-day cafés and waterfront tavernas of the island get busy. Pothia, the main village of Kalymnos, is the heart of the action. There are many cute bars playing lounge music, vibrant places for young people, family-friendly restaurants, as well as traditional Greek tavernas serving delicious local dishes.

There are also bars and restaurants both at Chora and more villages such as Masouri, Emporios and Mirties. The loudest bars and clubs on the island stay open until the early morning hours during peak season, but if you want a more laid-back night out on the island, you can find many easy-going entertainment and dining options.

The local cuisine consists of local products and fresh fish, age-long traditions and a great love for food! Kalymnos is famous for its delicious dishes and many unique recipes. There are many products of superb quality such as the local honey and citrus fruit, as well as intricate recipes with amazing flavors. You can have a taste of the island's gastronomy at one of the many tavernas, as well as the artisanal shops, grocery stores and bakeries. During your stay in Kalymnos, Ferryhopper suggests that you try:

The capital of Kalymnos and largest port on the island is Chora (or Pothia). During your holidays in Kalymnos, you can visit several of the major villages on the island such as the popular Emporios, Myrties, as well as Vathy, where the narrow “fjord” of Rina is located! There are tavernas, shops, museums and historical monuments all around the island. You can explore the history of sponge diving, visit beautiful chapels and taste local dishes and intoxicating spirits at the kafeneia. Here are some of the villages worth-visiting in Kalymnos:

Kalymnos is a densely populated island with approximately 16,000 permanent residents. Most locals stay in the capital, but there are visitor amenities all over the island. In Chora, there are ATMs, supermarkets, pharmacies, gas stations and the Kalymnos General Hospital. There are ATMs, supermarkets, grocery stores, gas stations, car rentals and dining options in more villages as well. As for accommodation, most hotels, rooms and vacation rentals are in Chora.

Here are some useful contacts for your trip to Kalymnos:

You can easily get around Kalymnos by bus, taxi or private vehicle. The central bus station of the island is located in the capital. You can catch a bus from Chora to all major beaches and villages in Kalymnos. For more flexibility, we recommend that you bring your own car or motorcycle on board the ferry from Athens or rent one there. Bear in mind that taxis in Kalymnos are pricier than public transport. Moreover, there are water taxis taking passengers to the nearby islands of Telendos and Pserimos, as well as around the island coast.

The main port of Kalymnos is located in Chora, on the south coast of the island. There are cafés, grocery stores, tavernas, car rentals, ATMs and a parking lot at the port area. Ferries from Piraeus to Kalymnos arrive at the main port. You can also catch a ferry from the port of Chora to more islands in the Aegean Sea.

There is also a smaller port at the village of Myrties. From the port of Myrties, you can catch a boat to the island of Telendos daily. Myrties is located around 20 minutes from Chora by car or bus.

On Ferryhopper’s Map of ferries, you can find all ferry routes from Kalymnos, to plan your island-hopping trip in the Aegean Sea in no time! 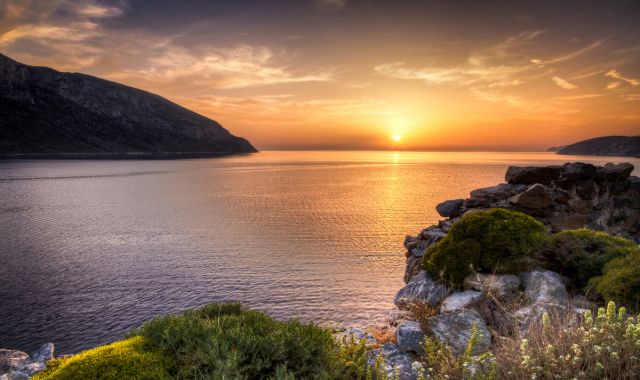 Sunset over the deep blue sea of Kalymnos

There are frequent ferry routes from the port of Piraeus in Athens to Kalymnos year-round. The Piraeus - Kalymnos ferry trip lasts from 9 to 12 hours and, normally, there are 5 crossings per week. As the journey duration is quite long, we recommend that you book a cabin for maximum privacy and comfort. Bear in mind that, during peak season, seats and cabins on board ferries to Kalymnos tend to sell out fast.

Where to book ferry tickets online to Kalymnos

You can find all ferry schedules to Kalymnos and book cheap ferry tickets online on Ferryhopper. Check available routes and compare prices from all ferry companies through our fare search engine. There are no extra fees and you can count on our Customer Support Team before, during and after your trip!