Ios, the island of light, is located in the southern Cyclades and it’s famous for its vibrant nightlife. During your holidays in Ios, you can have fun at the main town, explore the numerous monuments via hiking trails and dance at the beach. On this Ferryhopper page, you can find useful information about vacation in Ios, the best beaches, sights and food, as well as all ferry schedules. Book cheap ferry tickets to Ios online on Ferryhopper. 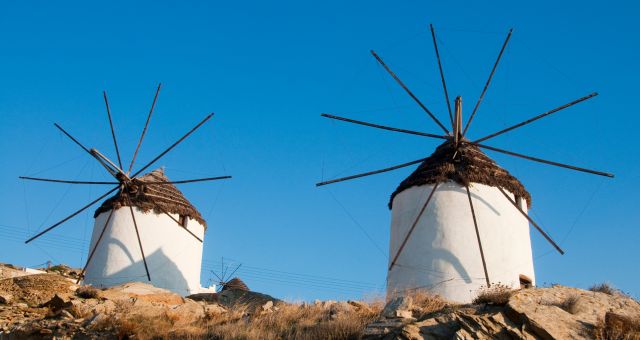 Windmills in the quaint main town of Ios

Ios is a popular destination due to its diverse character. It’s a typical Cycladic island with rich traditions, but it’s also one of the best destinations in Greece for summer fun! The island is famous for its quaint villages, impressive natural sites, amazing hiking trails and extraordinary beaches. Many travelers return to Ios every summer to enjoy the traditional character of the island, have fun at the bars and clubs, and be part of the local lifestyle.

How to get to Ios

You can travel to Ios by ferry from the port of Piraeus throughout the year, as well as from Rafina during the summer. During peak season, there are daily routes from the 2 ports in Athens. There are also frequent ferries from the island of Santorini for a great island-hopping trip. Find more details about ferry travel to Ios below.

What to do in Ios

In Ios, you can visit heavenly beaches accessible by hiking trails, try water sports such as diving and surfing, watch the sunset in Chora, enjoy the view from Palaiokastro and take superb photos at the lighthouse of Ormos and the traditional windmills. The beaches of Ios are great whether you’re looking for relaxing moments by the sea or you want to join young travelers in a bustling atmosphere. As for villages, although most of the action is in Chora, there are more settlements with distinct architecture and feeling. Explore the island on foot, meet the locals and try delicious local products such as wine and honey.

The beaches of Ios are famous for their crystal-clear waters, with most of them being awarded with a Blue Flag certification for their quality and amenities. There are many beaches with visitor amenities, where you can enjoy water sports and let kids play around in safety. If you’re into remote beaches, there are many hidden gems on the island. Some of them are only accessible by boat or through hiking trails and they are surely worth the effort! Here are our favorite beaches in Ios: 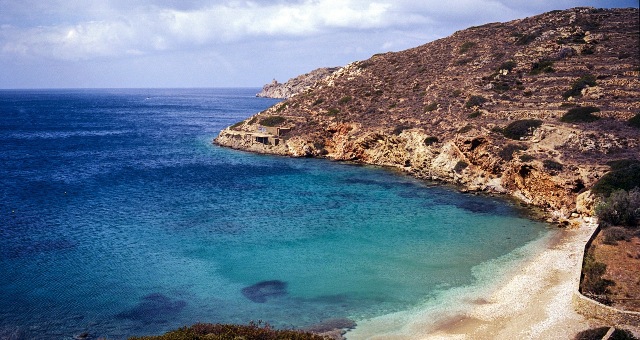 The magical Kampaki beach in Ios

Activities and sightseeing in Ios

If you’re looking to take a break from the intense nightlife of the island, there are many nature and culture activities to try in Ios. Walking around the island or exploring it by car, you can visit many places of historical significance, admire the Cycladic architecture and discover remote places with great views of the Aegean Sea.

Ferryhopper suggests the following sights and activities in Ios: 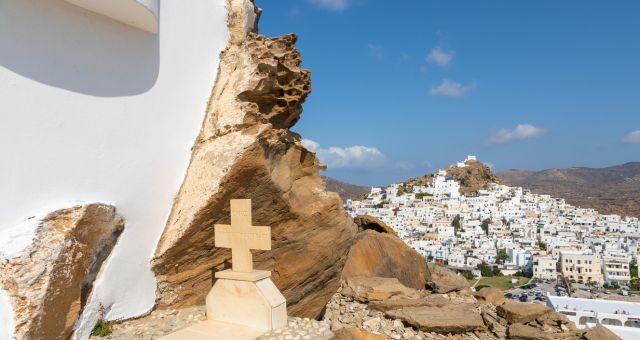 Nights in Ios can really get wild. The island has been famous for its nightlife since the 80s and it’s one of the most popular party islands in the Aegean Sea. There are many beach bars, lounge bars, dance clubs and restaurants on the island. Many young travelers gather at Chora by night, where the party atmosphere literally reaches the alleys of the village! Some of the most popular party spots on the island are Far Out in Mylopotas and Disco69 in Chora. You can also have fun at spontaneous parties, music festivals, DJ sets and more events during the summer.

If you prefer an easy-going night in Ios, there are many restaurants serving Greek and international dishes, cute tavernas with live music, as well as bars playing jazz tunes.

There are restaurants and tavernas for all budgets and tastes in Ios. The restaurant scene is quite diverse, including traditional Greek cuisine, as well as places serving international dishes. During your holidays in Ios, you can taste delicious local products and traditional recipes of amazing quality! We recommend that you try:

The main village and capital of Ios is Chora, located close to the port of the island. This is the only well-developed village in Ios, but you can find restaurants, hotels, beaches and interesting sights at more locations around the island. Some of the areas worth visiting in Ios are: Ormos, Koumpara, Mylopotas, Kampos and Magganari. 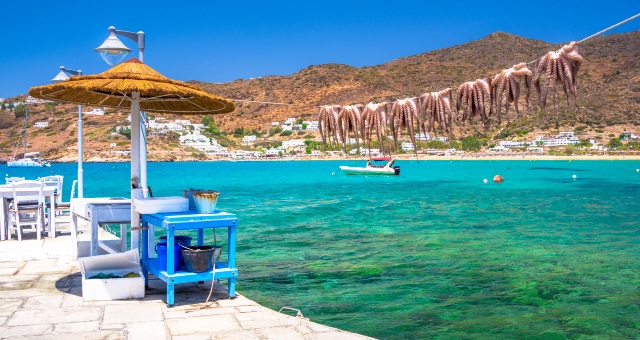 There are plenty of traveler amenities on the island of Ios. You can find ATMs, banks, supermarkets, car rentals and gas stations in Chora and the port. There’s also a health center in Chora. Moreover, there are grocery stores, tavernas, beach bars and cafés all over the island. As for accommodation, you can stay at hotels, luxury villas, vacation rentals and the camping site at Mylopotas.

Good to know: Bear in mind that Ios gets quite busy during the summer months. Particularly if you’re planning to get there in August, we recommend that you book accommodation and ferry tickets the soonest.

Useful phone numbers for your stay in Ios

Here are some useful contacts for your trip to Ios:

You can get around Ios by public bus, taxi, boat or your own vehicle. Buses in Ios connect Chora with the port and Mylopotas, as well as the most popular beaches during the summer. If you want to reach the more remote parts of the island, you can either catch a taxi or drive your car or motorcycle. You can rent one there or bring your vehicle on board the ferry from Athens. Bear in mind that taxis are quite expensive on the island. There is no airport in Ios, but you can fly to a nearby island such as Santorini and Paros, and catch the ferry from there.

The port of Ios is on the west coast of the island, less than 5 minutes to Chora by car and 20 minutes on foot. In the port area, you can find restaurants, car rental shops, hotels, bakeries, cafés, ATMs, shops and a public parking lot on Vaoi street close to the ferry terminal.

There are frequent ferry routes from Ios to more islands in the Aegean Sea, making it a great starting point for island hopping in the Cyclades! Here are some of the top islands to visit from Ios:

Not too sure where to travel next? On Ferryhopper’s Map of ferries, you can discover all ferry routes from Ios and plan your island-hopping itinerary in no time! See all ferry schedules, find the best routes and ferry companies, and book ferry tickets to the Greek islands in just 4 clicks! 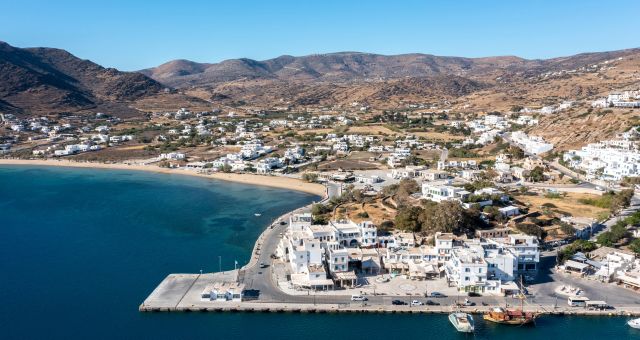 Sunset at the port of Ios

The port of Ios in Gialos is located 2km from Chora and it serves ferry routes from the ports of Piraeus and Rafina in Athens. You can also get to Ios from Santorini, as well as more islands of the Cycladic archipelago such as Paros. Find more information about the most popular crossings to Ios below:

Where to book ferry tickets online to Ios

You can easily book cheap ferry tickets to Ios on Ferryhopper. Find all the information you need about vacation in Ios, compare ferry schedules and companies, find the best fares on our fare search engine and get ready to party on the beautiful Cycladic island! If you need more details about holidays in the Greek islands and the best ferry routes, you can contact our Customer Support Team before, during or after your trip.