Patmos is a small island in the Dodecanese. It is known all over the world for its significant religious heritage, as well as the amazing beaches, quaint villages, incredible landscapes and superb food. Find useful information about the island’s beaches, attractions, villages and ferry routes below. Book cheap ferry tickets to Patmos on Ferryhopper and start your holidays! 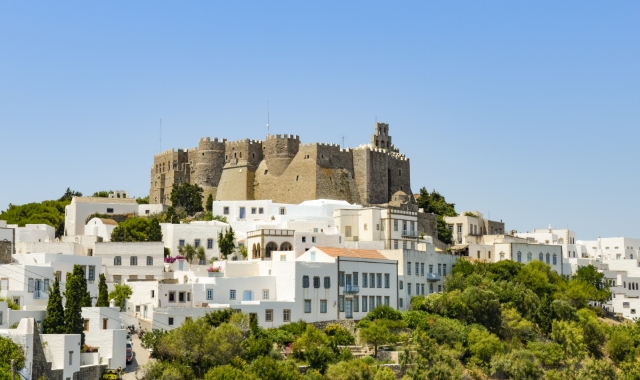 Chora and the imposing Monastery of Agios Ioannis Theologos in Patmos

Patmos is the perfect island to enjoy relaxing moments, walk around picturesque villages, swim in idyllic beaches and explore hiking trails with amazing views. The atmospheric Chora has been listed as a World Heritage Site by UNESCO. The town will charm you with its majestic architecture, narrow alleys and windmills located right next to the village. As for nighttime adventures, the port of Skala is the heart of the action in Patmos!

How to get to Patmos

The best way to get to Patmos is to catch the ferry from Piraeus. There are regular ferry crossings all year round with more scheduled trips during summer months. There’s no airport on the island of Patmos, but you can fly to the nearby islands of Leros and Kos and travel by ferry to Patmos.

What to do in Patmos

Patmos is a great destination for laid-back vacation by the beach and cultural sightseeing. The island has been voted as one of the best places to live in Europe by Forbes due to its tranquil lifestyle and idyllic scenery.

You can swim in amazing beaches and visit historical monuments of great importance. Don’t miss the chance to explore the villages of the island, to taste delicious local dishes and experience the local way of life.

There are many wonderful beaches in Patmos, where you can enjoy crystal-clear waters and the warm sun. You can find several spots with umbrellas, sun loungers and shops, but if you prefer to enjoy a quiet swim, the island of Patmos offers secluded options as well. Find the top 9 beaches in Patmos as selected by Ferryhopper below:

Tip: If you’re in the mood for an adventure, we suggest that you visit the islet of Chiliomodi near Patmos. The west shore of the islet is easily accessible and the beach stands out for its dark pebbles. 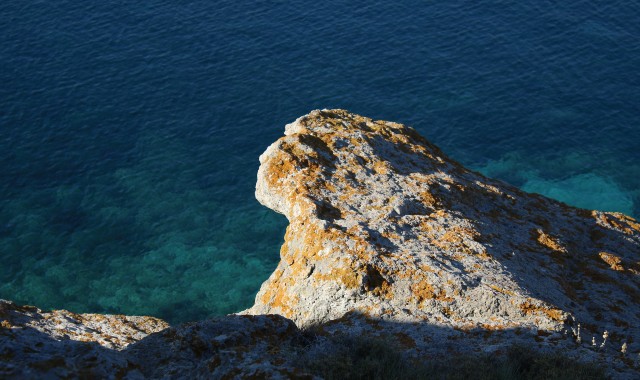 Patmos is an activity-lovers’ paradise. Walk down the island’s trails and explore its interesting sites and natural wonders. The Monastery of Agios Ioannis Theologos and the Cave of the Apocalypse are the most popular attractions. These two monuments, alongside the Chora of Patmos, have been listed as World Heritage Sites by UNESCO. Ferryhopper suggests a visit to the following sites:

Tip: Patmos is also known for the yearly International Film Festival that takes place in July. You can attend workshops, seminars and film screenings during the festival. 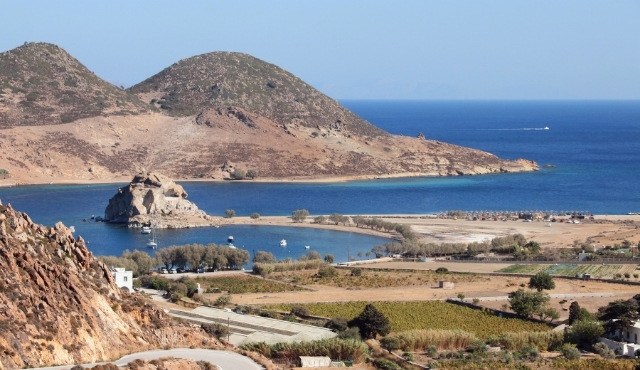 Although Patmos is not the ultimate party island, there are plenty of nighttime options for entertainment. Most bars and clubs are located in Skala, where you can enjoy cocktails and listen to lounge music after midnight. There are also typical Greek tavernas and restaurants all over the island.

The island of Patmos focuses on simple local ingredients and organic products. The local cuisine is typical of the Dodecanese. You can have a taste of local dishes at the island’s restaurants, kafeneia and bakeries. Here are some local delicacies to try in Patmos:

There are 4 main villages in Patmos, where most of the permanent residents live. Chora is the island’s capital and it is built by the Monastery of Agios Ioannis. You shouldn’t miss out on exploring its quaint alleys and kicking back at the Agia Levia and Xanthos Squares. Skala, the second largest village, is located 4km from the main town and it’s the main port of the island. Pay a visit to the villages of Kampos and Grikos to swim in perfect waters and taste delicious local food at the tavernas.

Although Patmos is a relatively small island, it provides plenty of services to travelers. There are supermarkets, ATMs, pharmacies and gas stations in all 4 villages. There’s also a medical center near the port. As for accommodation, there are many options throughout the island. There are also local buses connecting Chora and the port with beaches and other villages.

Useful phone numbers for your stay in Patmos

Find some useful phone numbers below:

You can discover the island of Patmos with your own vehicle and get to explore every hidden corner of the island. If you prefer not to drive during your holidays, there is a public bus service in Patmos. The public bus is available throughout the year, but it is more frequent during peak season. You can catch the bus from Chora or Skala to get to the island’s beaches and major villages.

There are also taxis at main squares, close to major attractions and at the port. If you prefer to travel by sea, you can board a water taxi and get to your favorite remote beach in no time.

The port of Patmos is Skala, located on the central-east coast of the island. Skala is also the second largest village on the island, which means there are various visitor facilities by the port, such as restaurants, supermarkets, hotels and parking. 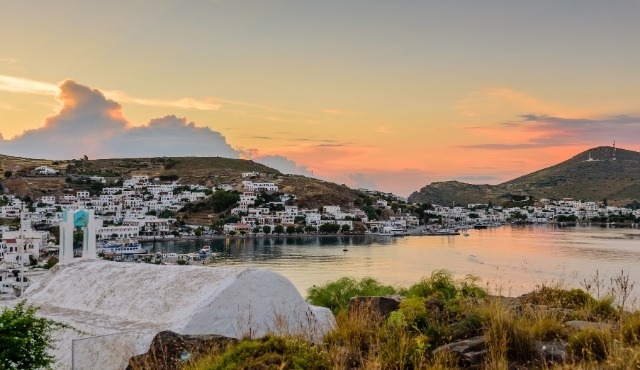 The port village of Skala at sunset

From the port of Patmos there are several direct ferry routes to other islands in the Dodecanese, the North Aegean Sea, as well as the island of Syros. More specifically, you can continue your vacation by traveling directly to the following islands from Patmos:

On Ferryhopper’s Map of ferries you can easily plan your island-hopping experience in the Aegean Sea. You can find all available ferry routes from and to Patmos in just a few clicks!

If you want to travel from mainland Greece to Patmos, you can take the ferry from the port of Piraeus in Athens. The Piraeus - Patmos ferry crossing is available several times a week and it is serviced by ferries that offer cabins and vehicle parking facilities. The ferry trip duration is 7-12 hours depending on the number of stops.

The famous windmills of Patmos

Where to book ferry tickets online to Patmos

On Ferryhopper you can find all the information you need for your vacation in Patmos including all ferry routes and ferry schedules for the island. Compare prices, take advantage of the latest offers and book ferry tickets to Patmos with no extra fees!