The bohemian city of Barcelona is also the oldest port in Spain and one of the most important ports in Europe. On Ferryhopper, you can take a look at available ferry routes from/to the port of Barcelona, our travel tips for your vacation and book your tickets with just a few clicks!

Find useful information about the ferry port of Barcelona and read about holidays in the city: 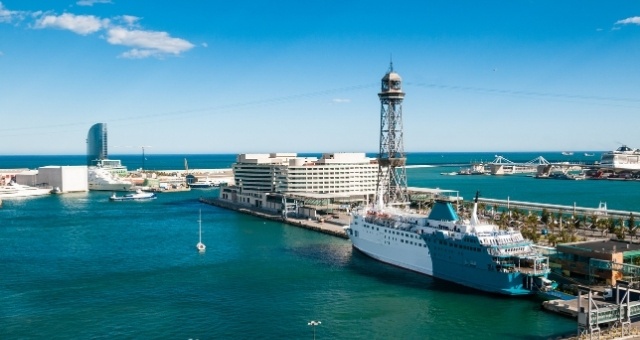 Ferry at the port of Barcelona

The port of Barcelona is located right next to the city center. Barcelona has 1 port with different terminals and wharves for passenger ferries, cruises and cargo ships.

The ferry companies that normally operate from the port of Barcelona are Baleària, Trasmediterránea, Grimaldi Lines, Grandi Navi Veloci (GNV) and Algérie Ferries.

If you drive to the port, you can access the terminal areas for short-term parking and drop-off. If you’re looking for long-term parking, the closest and easiest option would be the parking lot at the World Trade Center in the Moll de Barcelona.

Tip: visit the most charming neighborhoods of Barcelona, the Gothic Quarter and Raval near the port area. Across the coast, there are large promenades and walking areas, marinas, hotels, shopping malls and cultural centers.

Ferries from Barcelona usually travel to the Balearic Islands, Morocco and Italy.

The majority of the ferry routes from Barcelona are operated by large ferries that have a garage for the transfer of vehicles.

We have collected here some useful information about Barcelona ferries in order to plan your trip in the best possible way: 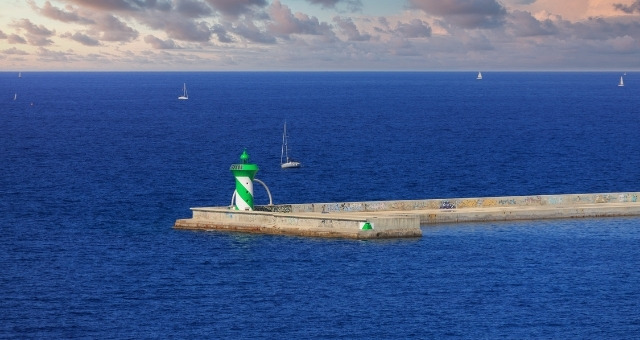 Here you can find more information on the ferry routes:

Tip: ferry trips from Barcelona to the ports of Italy are long and usually overnight so we recommend you book a bed cabin for a more comfortable trip.

Where is the ferry port in Barcelona?

The port of Barcelona is located in the community of Catalonia, on the northwest coast of Spain. It's also near the famous neighborhoods of Raval, Gothic Quarter, Barceloneta, Poble-Sec, Montjuic and Ribera.

You can actually walk from the passenger port to Plaça de Catalunya in the center of the city in about 15 minutes!

How to get to Barcelona port

The closest metro station to the port is Drassanes on line L3. There are also several bus stops around the passenger terminals.

Alternatively, if you’re heading to the port by car or motorbike, follow road C-31 which merges into B-10 that reaches the port area. 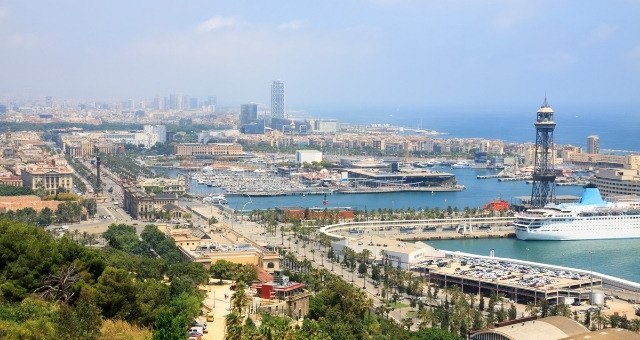 Barcelona is a cosmopolitan port city and one of the most popular holiday destinations in Europe and around the globe. The city’s vibe is going to charm you as soon as you step foot in the Catalan capital.

The food, the history, the architecture and the culture of Barcelona are only a few of the reasons why you should visit the second most populated city in Spain.

How to get to Barcelona

You can easily get to Barcelona by plane, ferry, train, or your own vehicle from mainland Spain, the Balearic Islands, Italy, France, as well as other European and international destinations.

Barcelona’s El Prat Airport is the second busiest airport in Spain and the closest to the city center. The distance between Barcelona center and the El Prat airport is approximately 12 km and 40 minutes by bus.

As for ferry routes, Barcelona is connected by ferry with the Balearic Islands, Italy and Morocco all year round. 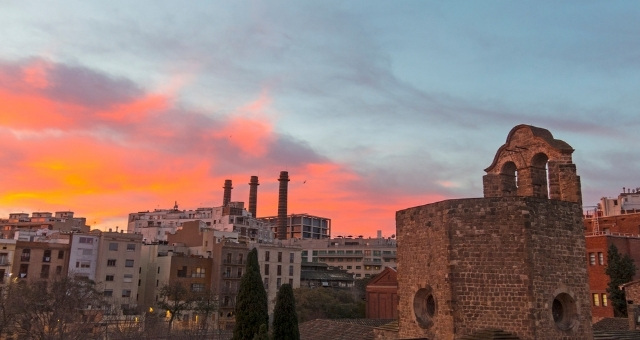 What to do in Barcelona

Barcelona is an all-year-round destination, perfect for summer holidays, ideal for culture-lovers, as well as a great stop before heading to the Balearic Islands by ferry.

Visit the stunning architectural works of the architect Antoni Gaudí, taste delicious Catalan products at the local food markets, catch panoramic views of the city from the hill of Montjuic and make sure you spend some time by the sea in one of the beautiful Barcelona beaches.

Tip: Ferryhopper suggests that you spend at least 4 days in Barcelona in order to get a taste of the city vibe and see the main sights.

The city of Barcelona has a coastline of about 4.5 km so there are plenty of beaches to choose from, right on the city’s seafront. Close to the city center you can find beaches to chill and sunbathe, do watersports or enjoy a drink in classy bars and restaurants by the sea.

Here is a list of the best beaches in Barcelona: 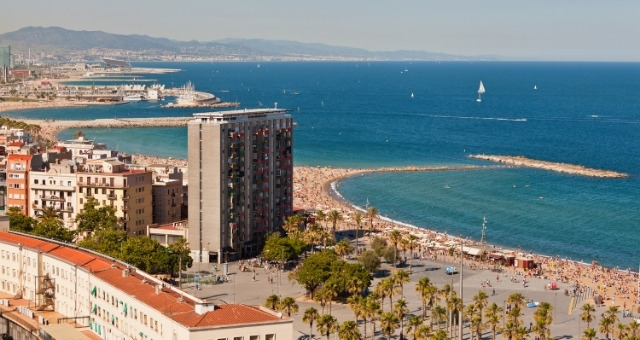 Aerial view of Barceloneta on a sunny day

Sightseeing and activities in Barcelona

Barcelona is a city full of sights and monuments, with many of them being part of the UNESCO Heritage Sites list. Walking around Barcelona's neighborhoods is one of the best ways to explore its sites and admire the city's architecture.

Are you wondering what to see in Barcelona? We made a list of some of the must-see sights in the city: 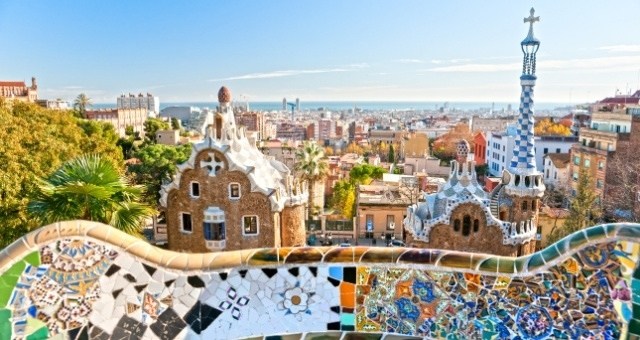 If you are planning to stay in Barcelona a bit longer we would recommend adding to your schedule a day trip to nearby destinations to explore cultural sites and natural attractions.

Some suggestions for short trips from Barcelona: 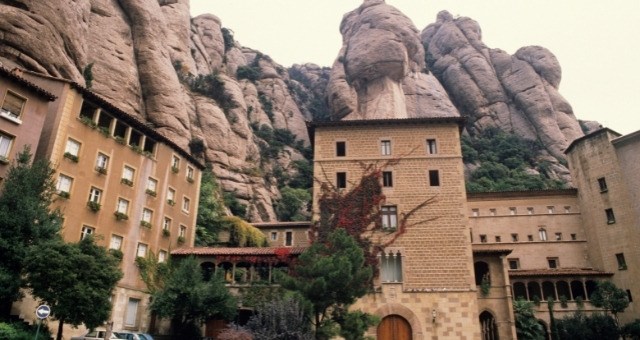 Barcelona is one of the top destinations for nightlife in Spain! There are many tapas restaurants across the city where you can enjoy typical Spanish food and drink. We recommend checking out the tapas bars in the area of Poble Sec.

In the heart of Barcelona's old town, Ciutat Vella, you will find stylish bars and alternative all-day cafes. In the district of Eixample, you'll go to listen to Latin music and dance to the latest hits, while the area also has many LGBT-friendly bars and clubs.

In the marina of Port Olympic, the area next to Barceloneta, the nightlife is lively and loud. Popular nightclubs, classy bar restaurants and big DJ events are the main attraction in the area for both locals and tourists. Get ready to party hard!

To get a taste of the more luxurious side of the city, you should go to the exclusive clubs north of Diagonal Avenue. Most of the bars and clubs will have a dress code and you might be lucky to meet celebrities while drinking your fancy cocktail.

Tip: the city metro is open 24 hours during the weekends so you don't have to worry about how to get home after a long night out!

Catalonia is a destination that is famous for its delicious recipes and tasty local products. To get an idea of Barcelona's gastronomy we recommend trying different restaurants and tapas bars around the city.

A few suggestions on what to try while in Barcelona:

Here are some more useful Barcelona tips to help make your holidays even more enjoyable: 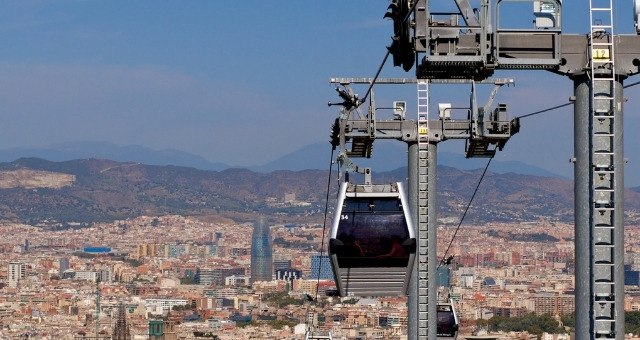 Barcelona is one of the largest cities in Spain, a modern city with lively vibes and impressive architecture. It has highly developed tourist services and there are things to see and do all year long.

In Barcelona, you will find a variety of accommodation options depending on your style and budget. If you want to go sightseeing around the city, we would recommend staying in a hotel or apartment in the Gothic Quarter or the Eixample district.

As for hospitals, there are several options in the center of Barcelona and the suburbs, so you can enjoy your vacation with peace of mind.

Important phone numbers for your stay in Barcelona

Here are some useful contacts for your trip to Barcelona: 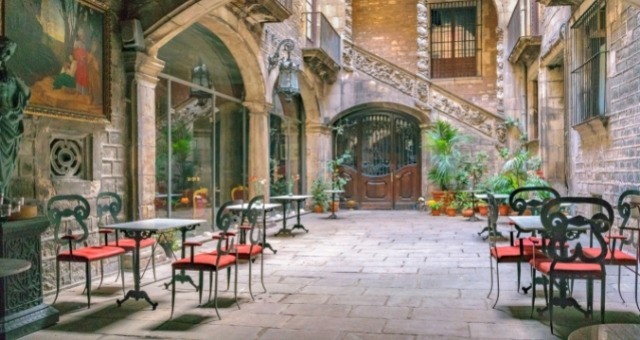 Restaurant in a picturesque courtyard in the Gothic Quarter of Barcelona

You can get around the Barcelona city center on foot or by bicycle. It's actually the best way to explore its neighborhoods and charming corners.

Barcelona has a great transport network with metro, buses, trains, and trams. You can get a ticket for the hop-on-hop-off bus and visit all the famous landmarks and city attractions.

On Ferryhopper, you can book tickets from Barcelona to the Balearic Islands and other Mediterranean destinations. Find all the information you need about ferry schedules from the port of Barcelona, check our Map of ferries for the available ferry crossings, compare companies and book ferry tickets online at no extra cost!