Sardinia is the second-largest island on the Mediterranean Sea and is famous for its emerald sea and white beaches. On Ferryhopper, you will find useful information about must-see places, beaches, local delicacies, ferries to Sardinia and book your tickets with just a few clicks!

Take a look at our tips for your dreamy vacation in Sardinia and discover useful information about its ports: 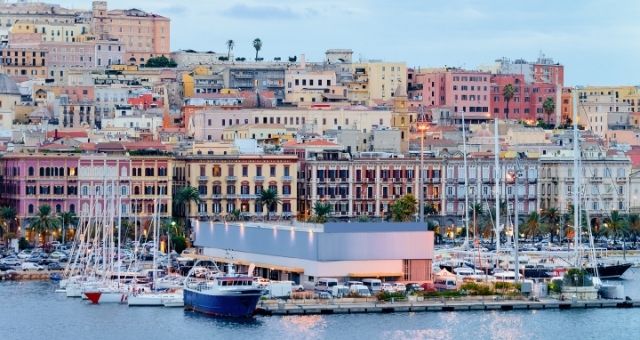 The colorful port of Cagliari in Sardinia

Sardinia has always been one of the most popular holiday destinations in Italy. With 2000km of coastline, this island is a mix of wild beaches, paradisiacal bays and breathtaking nature reserves.

The island of Sardinia is an intense experience of tradition and folklore, among mountain villages, local wines and excellent cuisine. Taking a break from diving in the turquoise waters, you can visit the ancient archaeological sites and discover the biodiversity of its UNESCO nature reserves.

Therefore, Sardinia is a great destination for families, couples or friends as it combines relaxation, adventure and fun. The island also boasts an excellent climate, with mild temperatures during the entire year. So, are you ready to go?

How to get to Sardinia

You can reach Sardinia by ferry or plane. Traveling by ferry may take longer but you can embark your vehicle. Also, you can book a cabin for a comfortable trip while enjoying the fascinating crossing and the breathtaking views from the ferry’s dock.

The ports of Sardinia connect with Genoa, Civitavecchia, Naples, Palermo, Piombino, Livorno and Savona, operating ferry crossings all year round. You can also arrive in Sardinia from the port of Barcelona (Spain), from France and Corsica thanks to the connections with the ports of Nice, Toulon, Bastia, Ajaccio and Bonifacio.

Alternatively, you can reach Sardinia by plane. There are several companies that offer daily flights to the island from both Italy (Cagliari, Olbia and Alghero) and abroad. 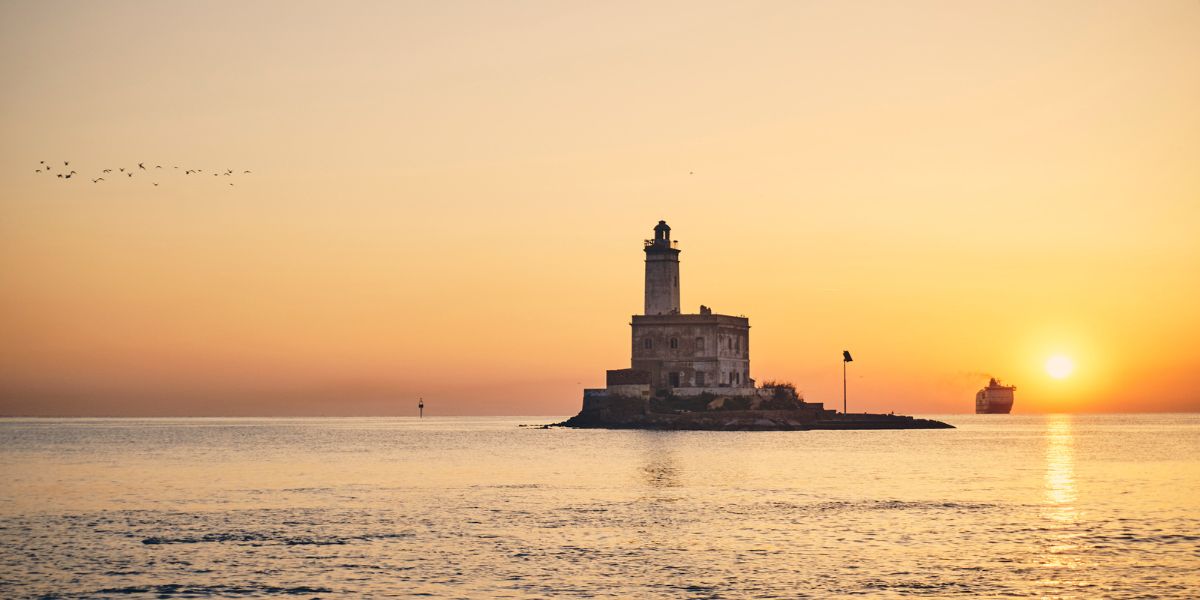 The lighthouse of Olbia illuminated by the colors of the sunset

What to do in Sardinia

There are plenty of things to do in Sardinia as it is the second-largest island in the Mediterranean Sea. In addition to pristine beaches and coves, you can visit marvelous cities, medieval villages and breathtaking archaeological sites.

From north to south, Sardinia is an island full of beautiful landscapes, ready to bewitch even the most demanding travelers.

Some of the top places to visit in Sardinia are Cagliari and Alghero, known as "The Barcelona of Sardinia" for its Catalan influences. Also, the coastal city of Olbia surrounded by a stunning palm-lined waterfront is great for 2 days.

Moreover, the seaside town of Santa Teresa Gallura, the beautiful Strait of Bonifacio and Arbatax located on the slopes of Capo Bellavista are top destinations in Sardinia for any type of traveler.

Sardinia is also a great destination for nature lovers as it is full of greenery and hiking trails. Among breathtaking landscapes, between cliffs and mesmerizing coves, it is a place for relaxation.

Visit the wonderful Asinara National Park, a remote island 16km long in Porto Torres. Its stunning natural beauty includes a pristine coastline and off-shore islets inviting you to immerse yourself into crystal-clear waters.

Among the most particular activities to do in Sardinia, there is also bird watching along the coast of Oristano, famous for its pink flamingos.

From the north of Sardinia, you can reach the Maddalena archipelago. You can hop on a ferry at the port of Palau and depart for a day trip to the island of La Maddalena!

Sardinia is an island full of heavenly beaches, ideal for those looking for social life and relaxation.

Here are the best 8 beaches of Sardinia: 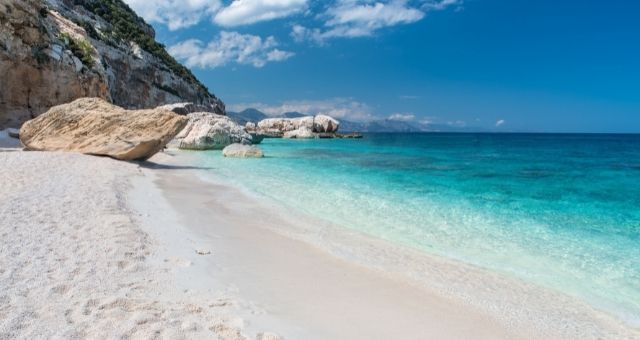 The heavenly Cala Goloritzè in the Gulf of Orosei

Here are some cultural attractions of Sardinia:

If you are looking for natural parks and breathtaking landscapes, here you can find the most beautiful natural attractions of Sardinia:

Happy donkeys in the Asinara National Park, in Sardinia

Sardinia has a lively nightlife for every taste. The area of the Costa Smeralda, to the north, is certainly the one that offers more entertainment. The towns of Porto Cervo, Porto Rotondo, San Teodoro, Olbia and Palau are famous for their luxurious nightclubs.

Santa Teresa di Gallura is also one of the most popular destinations for the very young, as it hosts some historic clubs in Sardinia.

But the island's nightlife is not far behind in the south either. Here the options are cheaper, but still quality. Don't miss the Poetto seafront in Cagliari and the Quartu area with beach bars by the sea!

For those who do not like busy bars or discos, both Cagliari and Alghero often offer evenings of live music and concerts.

Sardinian cuisine has its roots in the pastoral and peasant tradition, with recipes that have been handed down for generations. The combination of the famous Sardinian cheese with a glass of Cannonau wine is explosive.

Here are some of the most delicious local delicacies to try during your stay in Sardinia:

Here are 4 tips that we hope will be useful to you during your stay in Sardinia:

Sardinia is a very popular tourist destination, so it offers many services and facilities for its visitors throughout the year. However, most of the tourist activities operate during the summer.

The area of Costa Smeralda and the towns of Porto Rotondo and Porto Cervo are usually more expensive than the southern part of Sardinia. There you can find a very wide choice of hotels, pensions, guest houses and Bed & Breakfasts.

Also, if you’re looking for a more traditional experience, we recommend you to stay in a farmhouse in the Oristano area.

Sardinia is also an excellent destination for camping lovers. You can find the best campsites in the areas of Alghero, Olbia, Costa Rei and in the province of Ogliastra.

Good to know: keep in mind that several ferry companies allow you to embark campers and caravans on ferries to Sardinia, offering discounts and special rates.

Important phone numbers for your stay in Sardinia

Here are some useful contacts to keep within reach during your trip to Sardinia:

Touring Sardinia with your own vehicle is the best choice to be able to move better between one location and another and visit more places.

There are no motorways on the island, but the high-speed roads allow you to reach the main areas. The SS131 route crosses Sardinia from south to north connecting Cagliari to Sassari and Porto Torres, passing through the city of Oristano.

If you prefer to travel by bus, you should know that most of the island’s public network service is operated by the ARST lines. Buses connect tourist resorts and the innermost towns. As for the train, most of the regional connections depart from Cagliari and reach the main cities.

The ARST regional railways also allow you to discover the various places in Sardinia with the Trenino Verde, the Green Train. There are 4 lines that cross both the interior and the coast: Mandas-Arbatax, Mandas-Isili – Sorgono, Macomer – Bosa and Nulvi – Tempio – Palau.

While in Sardinia, you can also go island hopping. A few kilometers from the Sardinian coast, there are splendid islets to reach by ferry or boat. From the small port of Palau, you can get to the island of La Maddalena. From there, you can hop on to the islands of Santa Maria, Budelli and Spargi.

Also, from Calasetta and Portovesme you can reach the island of San Pietro with the famous town of Carloforte or go on a day trip to Asinara leaving from the port of Porto Torres.

Sardinia is home to several ports and marinas near the tourist resorts of the island. Despite the presence of smaller marinas, the main ports of Sardinia are the ports of Cagliari, Arbatax, Olbia, Golfo d'Aranci, Porto Torres and Santa Teresa Gallura.

The port of Cagliari, in the southern part of Sardinia, is one of the oldest ports in Italy and is situated near the city center. The Sardinian capital is connected throughout the year with the ports of Civitavecchia, Naples and Palermo.

The central part of Sardinia is home to the famous port of Arbatax, a very popular destination for summer holidays. However, most ferries arrive all year round from the port of Civitavecchia in Rome.

Going north-east, there is the port of Olbia, one of the most important ports with over 1 million passengers annually. Olbia is connected with the ports of Civitavecchia, Genoa, Livorno and Piombino.

Further north of Olbia is the port of Golfo Aranci, the main access to the famous Costa Smeralda. Ships arrive daily from Livorno, Savona, France (Nice) and Bastia (Corsica).

However, we find the largest port in Sardinia, the port of Porto Torres to the northwest. Thanks to its position, ferries arrive from Italy (Genoa and Civitavecchia), from Spain (Barcelona), from France (Nice and Toulon) and from Ajaccio in Corsica.

At the northern end of Sardinia, there is also the port of Santa Teresa Gallura, in the province of Sassari. Located in a scenic bay, it represents the closest stop for those arriving from Corsica. Santa Teresa di Gallura is connected throughout the year with Bonifacio, a beautiful seaside town in the south of the French island.

You can travel by ferry to the ports of Sardinia from Rome (Civitavecchia), Liguria (Genoa and Savona), Tuscany (Livorno and Piombino), Naples and Palermo.

The Italian island is also connected to some ports in France (Nice and Toulon), Corsica (Bastia, Ajaccio and Bonifacio) and Spain (Barcelona).

The ferry companies offering the routes to/from Sardinia are Grimaldi Lines, Moby Lines, Tirrenia, GNV (Grandi Navi Veloci), Corsica Ferries and Ichnusa Lines. Most of the connections include active crossings all year round, but there are also seasonal ferry crossings.

There are several ferry crossings from the Italian peninsula to the island of Sardinia. Here you can find more information about the ferry routes and schedules to Sardinia:

There are also many ferry crossings from France to Sardinia. Here you can find more information about the ferry routes and schedules from the ports of Nice and Toulon:

As for the crossings from Corsica to Sardinia, you can see here all the information about the ferry routes and schedules from the ports of Bonifacio, Ajaccio and Bastia:

You can also reach Porto Torres by ferry departing from the port of Barcelona in Spain. It is one of the most popular ferry routes with 4 weekly connections. The journey takes approximately 12 hours.

Take a look at our Map of ferries with all the connections to the ports of Sardinia and start planning your trip right away!

Where to book ferry tickets to Sardinia online?

On Ferryhopper, you can find all connections to Sardinia, compare prices and companies, departure times and book your ferry tickets online with ease. Get ready to discover this Mediterranean paradise far and wide and experience your dreamy vacation!