Skiathos is a cosmopolitan island in the northwest Aegean, part of the Sporades island complex. On this page, you can find useful information about Skiathos, how to get there, popular ferry schedules in the Sporades, and what to do there. Book your ferry tickets to Skiathos at the best prices, on Ferryhopper.

How to get to Skiathos

You can easily travel to Skiathos from mainland Greece by ferry, and more specifically from the ports of Volos, Mantoudi or Agios Konstantinos. You can find more information about how to get from Athens to Skiathos by bus/car and ferry on our relevant page.

The ferry trip duration to Skiathos ranges from 1,5 to 3,5 hours depending on the ferry type and the port of departure. Skiathos also has frequent ferry connections to the other Sporades islands, like Skopelos or Alonissos so it's easy to travel between the islands throughout the year.

There are frequent ferry connections to Skiathos during the whole year so the island is a popular holiday destination for both summer and winter months.

During the summer months, there is often a ferry connection from Thessaloniki to Skiathos serving passengers from northern Greece traveling to Sporades islands. This ferry crossing is usually operated by high-speed ferries and the ferry trip lasts approximately 2,5 hours. Since this is not a fixed ferry route we recommend that you check the Ferryhopper search engine for all the updated ferry schedules to Greek destinations.

Skiathos is a great point of departure for an island-hopping experience in the Sporades islands! The most popular ferry connection from Skiathos is the crossing to its neighboring island of Skopelos. The Skiathos-Skopelos ferry route runs daily throughout the year, while in the summer months there are at least 4 ferries per day. The ferry trip duration from Skiathos to the port of Glossa in Skopelos is 30min and to the port of Skopelos town, it's 1,5 hours. The same ferry line that connects Skiathos to the ports of Skopelos also passes by the beautiful island of Alonissos, further east in the Sporades complex. The Skiathos - Alonissos ferry connection is regular all-year-round with 1-2 ferries per day and the ferry trip lasts from 1,5 hours to 2,5 hours.

On the Ferryhopper Map of Ferries, you can check all ferry connections from/to Skiathos in order to book the best ferry itinerary for you! What to do in Skiathos

Holidays on the island of Skiathos is a very popular option amongst greek and international travelers as the island has great beaches, beautiful landscapes, rich nature, and vivid lifestyle. Skiathos is also famous for its outdoor activities and water sports.

The island's nightlife centers on the capital, Skiathos Town, which is renowned for its restaurants, bars, and clubs as well as to the lively all-day beach bars across the island's coast.

Skiathos has many beautiful beaches, renowned for their turquoise waters, with either fine sand or white pebbles. Most of Skiathos' beaches are organized, with many tourist amenities like umbrellas, sunbeds, water sports clubs, etc. Here are some of the best beaches in Skiathos: 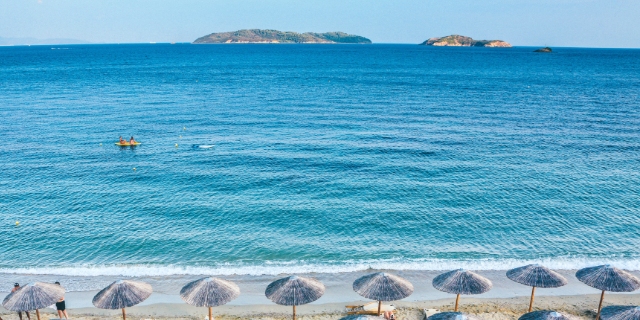 The main town of Skiathos is the meeting point for most tourists and locals. Most of the island residents live in the town of Skiathos, which also concentrates the commercial and municipal activities of the island. Beyond the charming and lively Skiathos Chora, there are other settlements worth visiting in Skiathos that combine beautiful landscapes with the island's local character. For example:

Food and drink in Skiathos

Holidays in Skiathos are associated with good food, based on traditional Mediterranean tastes, and with its modern restaurants and bars! Skiathos is often called the second Mykonos of Greece, due to the island's cosmopolitan character, the parties, and endless entertainment options. An alternative option to the lively nightlife of Skiathos is to spend an evening watching a film at the romantic open-air cinema of Skiathos. Skiathos is an island with long cultural history and you will be impressed by the island's Byzantine and medieval monuments such as churches, monasteries or castles. The island has also nature reserve areas, pine tree forests and impressive sceneries which we recommend that you also visit while in Skiathos. Here are some suggestions for sightseeing in Skiathos: Useful information for your trip to Skiathos

Skiathos is one of the most touristic islands in Greece and the island has a modern tourist infrastructure to facilitate all needs. In the port, town and main settlements of Skiathos, you will find supermarkets, petrol stations, health centers, while in the port you can find ATMs for cash withdrawal. Skiathos also has a good bus network connecting the island port and town with the villages, beaches, and the airport.

Here you can see some useful phone numbers for your holidays in Skiathos:

Where to book ferry tickets to Skiathos?

On Ferryhopper you can book your ferry tickets to Skiathos online in just 4 clicks! The island of Skiathos is an ideal destination for summer holidays, easily accessible from mainland Greece, with amazing island-hopping options to neighboring islands, impressive nature, and a unique party vibe. On our pages, you can compare ferry schedules to Skiathos, departure port options, ferry ticket types, and prices in order to organize the perfect trip to the Sporades islands.