Nador is a coastal city and the capital of the northeastern Rif region in Morocco. On Ferryhopper, you can take a look at available ferry routes from/to the port of Nador, our travel tips for your vacation and book your tickets with just a few clicks!

Read our suggestions for your dreamy holidays in Nador and find useful information about its port: 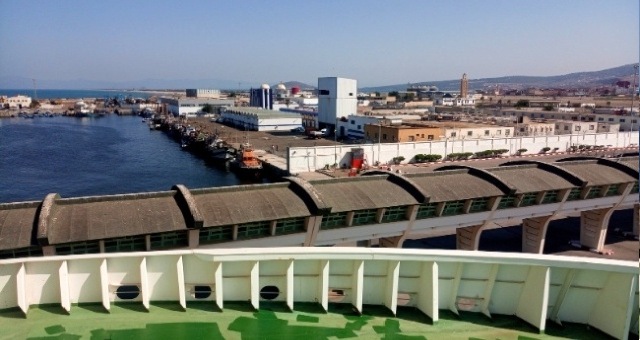 The port of Nador from the ferry

The port of Nador is also known as the port of Beni Ensar. It's one of the most important ports in Morocco and one of Europe’s main gateways to the African country. It is located in the town of Beni Ensar (also called Beni Ansar or Aït Nsar), a few kilometers north of the city of Nador.

The port of Nador operates regular ferry connections from/to France (Sète) and Spain (Motril, Barcelona, Almería). In close proximity to the ferry terminal, you can find a waiting area, cafés, restaurants and ATM machines. There is also a parking lot as well as car rental services.

Tip: if you’re thinking of traveling to Morocco by ferry, Nador can serve as an alternative destination to the Spanish enclave of Melilla. The two cities are only 15km away from each other and share port facilities.

The city of Nador is connected with Spain and France with several ferry crossings. The crossing connecting France to Morocco is the Sète - Nador ferry route. It is operated all year round by 2 companies: Baleària and Grandi Navi Veloci (GNV).

There are usually 2-3 weekly crossings, with the trip taking between 39 and 43 hours. Ticket prices to Nador from Sète start at around €55.

As for the connection of Morocco with the neighboring country of Spain, there are several crossings with ferries departing from the cities of Barcelona, Motril and Almería.

Tip: if you’re planning to travel from Barcelona to Morocco, you can also take the ferry to the port of Tangier. While Nador is on the northeast coast of Morocco, Tangier is located in the northwest, on the Strait of Gibraltar.

Where is the ferry port in Nador?

Nador is a Mediterranean city on the northeastern coast of Morocco. The port of Nador is located in the town of Beni Ensar, about 13km north of the city of Nador. It's also right next to the international border with the autonomous Spanish city of Melilla.

How to get to Nador port

You can reach the port of Nador either by car or by train. National Route 15 (N15) connects the city of Nador to Beni Ensar and the port.

Alternatively, you can take National Route 16 (N16) running from the west to the east and connecting the cities of Tangier, Al Hoceima and Nador.

You can also reach the port of Nador by train from Tangier, Fez, Casablanca and other major Moroccan cities. The Taourirt - Nador line connects Beni Ensar to the national railway network. Trains terminate at the port, providing easy access to the ferry terminal.

There are also bus services (operated by CTM) connecting the town of Beni Ensar to some of the main urban centers such as Fez, Casablanca, Al Hoceima, Rabat, Marrakech and Tangier. You can find more information about intercity bus routes and schedules in Morocco on the CTM website (in French). 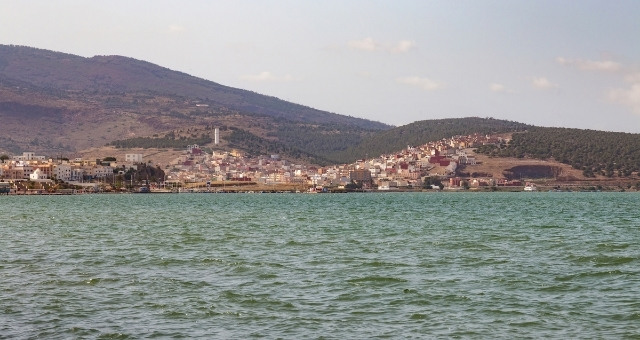 The coast of the saltwater lagoon Mar Chica

Situated on the coast of a beautiful saltwater lagoon in the Mediterranean, Nador is a small city in the Rif region of Morocco. It was founded in the 19th century by the local Berber population and was under Spanish rule from 1912 till Morocco’s independence in 1956.

With several redevelopment projects on the way, Nador is set to become one of the biggest tourist resorts in the country. But for the time being, you can still enjoy the authentic Moroccan atmosphere and laid-back vibe of the city.

Strolling down the streets of Nador, you will have the opportunity to catch a glimpse of the everyday life of the town’s inhabitants and get to know the local culture. And if it gets too hot, you can always escape to one of the lovely nearby beaches for a relaxing day by the sea!

How to get to Nador

You can reach Nador by ferry from France (Sète) and Spain (Barcelona, Motril and Almería).

You can also get to Nador by plane. The Nador International Airport (also known as El Aroui Airport) is located approximately 24km south of the city and serves connections from France, Germany, Belgium, Spain and the Netherlands. Taxi services are available at the airport, but there is no public transport to Nador.

If you’re traveling to Nador from Spain, you can also fly to Melilla Airport. The airport is located just 17km away from the city center of Nador. However, you will have to cross the border to reach the city. The Melilla Airport connects the Spanish city to southern Spain as well as Madrid and Gran Canaria.

If you are already in Morocco, there are regular bus and train services connecting Nador with several major and smaller cities across the country.

What to do in Nador

While Nador does not have world-renowned sights and attractions that would get the tourist adrenaline pumping, it offers a great local experience to visitors.

One of the best things to do in Nador is to walk around the city to discover the traditional tea shops and restaurants, try delicious Moroccan dishes and enjoy great views of the Mediterranean. You should also visit the Nador souk, the city’s colorful marketplace, where you can find pretty much anything your heart desires!

To catch some sun and truly unwind, head to one of the beautiful beaches near Nador. For those who want to explore the area, there are many charming places to visit near the city, such as Mount Gourougou and the Spanish city of Melilla. 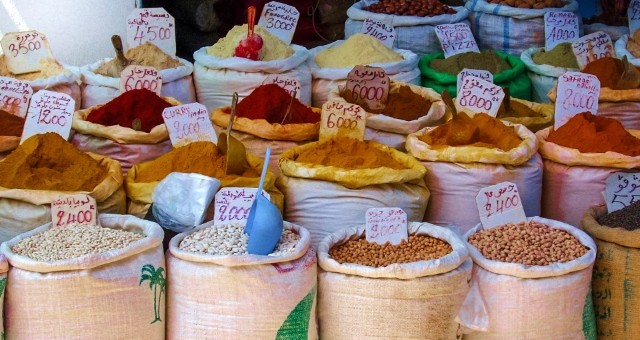 Colorful spices at the traditional market of Nador

Given its location on the coast of the Mediterranean, it’s no wonder that Nador is close to so many gorgeous beaches. The mild weather allows you to enjoy the sea and the sun for most of the year, with the months from May to September being the warmest ones.

Some of the top beaches close to Nador are:

Sightseeing and activities in Nador

Given its small size, Nador’s attractions can easily be explored on foot, allowing you to fully experience the city’s daily life. For those who want to enjoy the great outdoors, Nador is also close to some impressive natural sights, such as Mount Gourougou.

Here  are some of the best places to visit while in Nador:

Important note: if you decide to visit Melilla from Nador, you will be crossing an international border. This means that you will need your passport, visa or other official documents that are required to enter the Spanish territory.

As you would expect from a small Moroccan city, Nador has a strong café culture. While drinking is permitted in the country, alcohol must be purchased and consumed in places that have a special license. If you’re looking for something stronger than mint tea, the bar of the Mercure Rif Nador hotel is one of the only places in Nador that serves alcohol.

Nador is full of small tea shops and restaurants that offer mouthwatering Moroccan dishes as well as international favorites such as pizza and burgers. You can start your day with a hearty Moroccan breakfast: eggs with bread accompanied by mint tea. We also recommend trying fresh fish and seafood as well as grilled chicken, which seems to be a very popular dish in Nador. 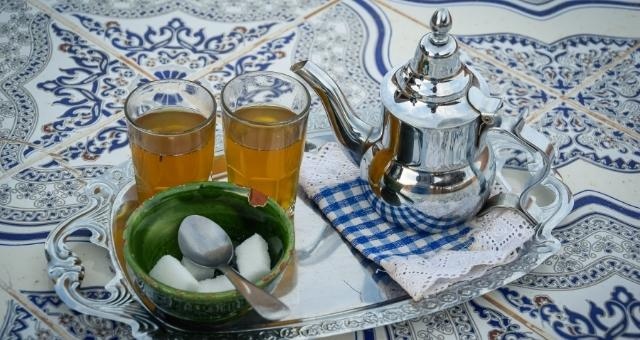 You can visit Nador and the coastal regions of Morocco at any time of the year. While in the south of the country it can get very hot during the summer, the sea breeze makes the sunny coast comfortable, with temperatures not rising above 25-26°C. Winters are pleasantly mild, but the weather can get a bit cloudy and windy.

However, if you love swimming and sunbathing, the best time to travel to Nador is between May and September.

In the center of Nador, you can find many shops, supermarkets, pharmacies and ATM machines. The city also has 2 hospitals, El Hassani and Al Matare.

As for accommodation, there are several hotels that suit all budgets, while you can also find some apartments and rooms to rent.

The main languages spoken in Nador are Tarifit Berber, Arabic and French. Due to the close proximity of the city to Melilla, many locals also speak or understand Spanish.

Good to Know: Riffian Berber people represent 98% of the population of Nador, making it the largest Tarifit-speaking city in the world.

Important phone numbers for your stay in Nador

Here are some useful contacts to keep handy during your trip to Nador:

Nador is a small city where everything can be reached on foot. Alternatively, you can get around by taxi, one of the most popular means of transport in Morocco. There are 2 types of taxis in the country: petits taxis (“small taxis”) and grands taxis (“big taxis”).

Petits taxis have a maximum capacity of 3 passengers (plus the driver) and can only transfer you within city limits. There are taxi ranks for petits taxis, but it’s also very common for people to hail them on the street.

Most petits taxis do not have meters, so make sure that you agree on a price with the driver in advance. Remember that if there are vacant seats, the driver might pick up other passengers going roughly in the same direction. You can also hire the whole taxi for an agreed price.

If you want to travel outside Nador, you can get a grand taxi. Grands taxis can accommodate up to 7 people (including the driver) and taxi ranks can be found around the city. Bear in mind that some grands taxis only travel on fixed routes.

Grands taxis are normally shared with other passengers going to the same destination or somewhere along the route. There is also the option to hire the whole vehicle if you’re willing to pay for all the vacant seats.

There is also a public bus network in Nador, but some local help will probably be needed to make the best use of it. Buses are operated by the company Vectalia. 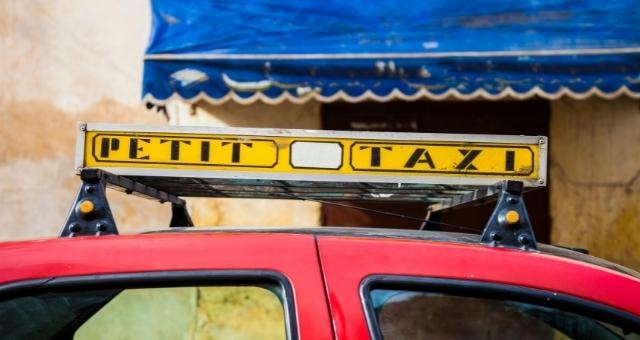 The popular means of transport, petits taxis in Morocco

Where to book ferry tickets online to Nador

Book cheap ferry tickets to Nador online on Ferryhopper with no hidden fees! Find all the information you need about the port and the city of Nador, compare prices and organize your ferry trip to Morocco with just a few clicks.