Melilla is a Spanish autonomous city located on the northwest coast of Africa. It lies on the Cape Tres Forcas, close to the Sahara Desert, and shares a border with Morocco. On Ferryhopper you can find all the information you need about ferry routes and ferry schedules from the port of Melilla to arrange the details of your trip!

Find useful information about the ferry port of Melilla and read about holidays in the city: The port of Melilla is one of the most historic as it has been operating since antiquity. It is a getaway from Spain to Africa, as it is connected by ferry with major ports of Andalusia.

It is located near the town center and next to the main services. Specifically, there are shops, banks, attractions and restaurants nearby.

In addition, the port of Melilla is newly renovated and despite its small size, you can find parking facilities and information kiosks in the area

From the city of Melilla, you can take the ferry to the ports of Málaga, Motril and Almería in southern Spain. The ferry companies that usually operate at the small port of Melilla are Baleària, Trasmediterránea and FRS.

Ferry from Melilla to Málaga

The Melilla - Málaga ferry route is operated by Baleària and Trasmediterránea. The ferry trip lasts approximately 6 hours and the service is available 10 times a week on average. Normally, during the summer months the ferry schedule frequency is higher. Standard tickets for the ferry crossing to Málaga start at €40.

Ferry from Melilla to Motril

The ferry crossing from Melilla to Motril is serviced by FRS and the duration of the trip is around 5h 45min. From the port of Melilla, there are 6 weekly crossings to the Andalusian port. You can get a ferry ticket for €35.

Ferry from Melilla to Almería

Where is the ferry port in Melilla?

The port of Melilla is located next to its center and borders on the port of Nador. The ferry terminal serving passengers traveling to Andalusia is located on the northern part of the port by General Macías Avenue, which starts at Plaza de España.

How to get to Melilla port 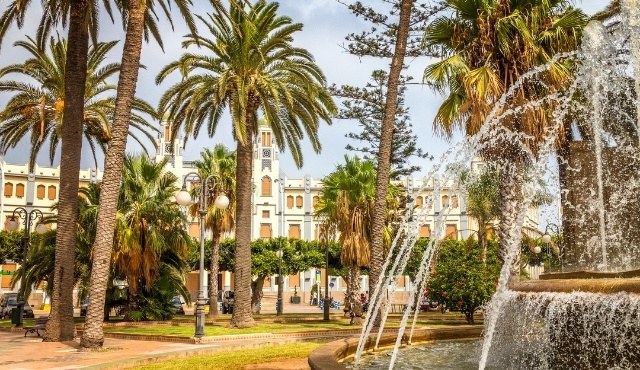 Palm trees and fountains in Plaza de España in Melilla

The name Melilla means the “town of honey” according to some historians. We can't be sure this is true, but if you’re visiting the Spanish exclave, you’re in for a sweet treat!

The city is part of Spain and, due to its location right next to Morocco, it is distinguished for its multicultural and multiethnic character. It is full of historical sites like churches and museums, as well as cafés and restaurants serving delicious tapas!

Melilla is well connected with the ports of Andalusia and, due to its size, is the perfect destination for a few-day getaway to explore the other side of Spain!

How to get to Melilla

Important: Bear in mind that the Melilla - Morocco border is currently closed.

On the other hand, you can catch a plane from major Spanish cities to Melilla. There are frequent flights from Málaga and Madrid and occasional routes from Almería, Granada, Valencia and Barcelona.

Note: Be sure to have all the necessary documentation with you to reach Melilla from Morocco, as the town is a Spanish exclave.

What to do in Melilla

Melilla is a smart option when you want to organize a few-day trip! Its center is small and has many things to do and see.

First, don’t miss to visit the old fortress of the town, Melilla la Vieja. It is an imposing trademark of the town, where you can take a glimpse of its history and culture.

The coastline of Melilla has sandy beaches with amazing waters that invite visitors to spend some time there. Near the beaches, there are many bars and restaurants, where you can enjoy a meal or a drink, after swimming. Also, there are parks and squares like Plaza de España, that are ideal for a stroll.

Melilla has rich gastronomy with many local products and recipes. Most of the dishes are a combination of cultures that will amaze you.

The coast of Melilla is around 9 km and it has beautiful and sandy beaches, where you can relax and swim. Most of them are fully equipped with amenities, as they are pretty close to the urban area. However, there are also smaller and wilder ones, where you can enjoy swimming in peace.

You can choose between the following beaches of Melilla: 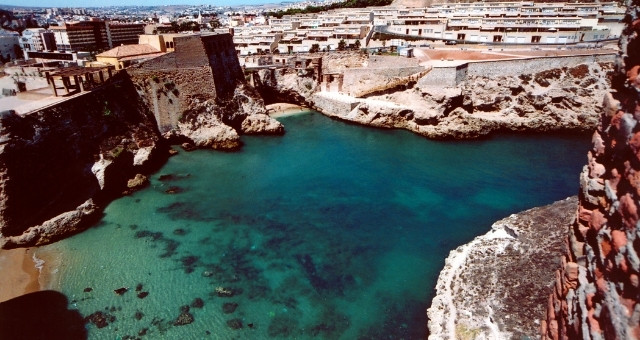 Activities and sightseeing in Melilla

Melilla is a town with a strong multicultural essence, that you can notice from the different people, the architecture and the various cultural sites. Right above the port of Melilla, stands the big fortress of Melilla la Vieja which, nowadays, houses many historical sites like churches and museums. All through the city, especially around the Plaza de España, you can see modernist buildings of great significance.

Ferryhopper suggests that you visit the following places and attractions in Melilla:

Melilla is a vivid town, full of café/bars and places to eat traditional tapas. The Puerto Noray area by the marina is one of the liveliest parts of the city, perfect to enjoy a night-out during your holidays!

A standard meeting point in Melilla is Plaza de España, which is full of people all day long. You can also grab a drink and go for a walk to the Hernández park or the beach.

While in Melilla, you will try some very original and tasteful dishes of its local cuisine. The combination of the Iberian and Moroccan elements will surely amaze you. Most dishes are mainly based on meat, seafood and spices.

We recommend that you try: 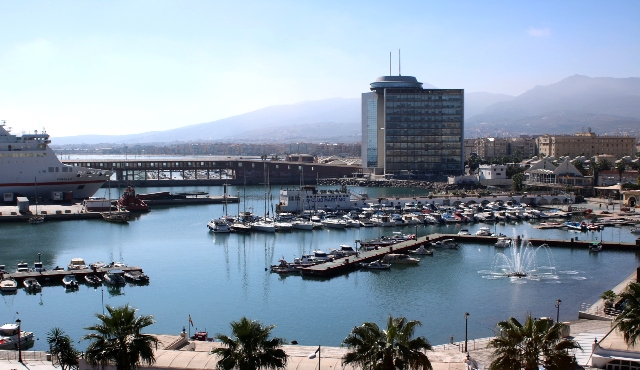 The port of Melilla near its center

Melilla is a popular holiday destination for the Spanish region. The town has all the necessary services and facilities for the visitors, such as supermarkets, gas stations, restaurants and various shops. As for medical services, the town has one general hospital, some medical centers and pharmacies.

Regarding accommodation, Melilla has a limited number of hotels, which are actually budget-friendly. For this reason, we suggest that you book your accommodation to Melilla well in advance, to avoid unavailability.

Important phone numbers for your stay in Melilla

Here are some useful contacts for your trip to Melilla:

The town of Melilla is not very big and you can easily get around it on foot. However, the town has public means of transport, as there are 6 bus routes that connect almost every area of Melilla. In addition, you can also use your own vehicle or get a taxi and freely move around the town.

Where to book ferry tickets online from Melilla

Find all the information you need about ferry schedules from the port of Melilla. Check Ferryhopper’s Map of ferries for available ferry crossings, compare ferry companies, and book tickets with no extra fees!