Livorno is a quintessential port town located on the west coast of Tuscany. Its cultural attractions, nightlife and beaches make it an ideal year-round destination.

On Ferryhopper, you'll find lots of useful information about Livorno's must-see sights, beaches, local delicacies, and ferries to/from the Tuscan town. Take a look at our travel tips, available routes and book your ferry tickets with just a few clicks!

Find out more about Livorno: 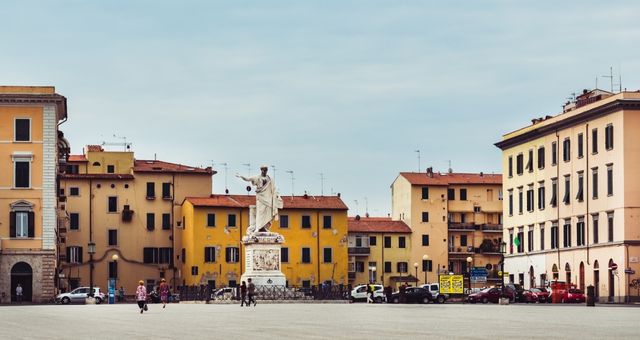 Piazza della Repubblica, in the center of Livorno

Known for its historic port, seafood specialties and elegant belle époque buildings, Livorno is usually a gateway to Florence and Pisa.

However, Livorno deserves a more in-depth visit and by coming here on vacation you can discover a lesser-known but very fascinating Tuscan town. Livorno is a multicultural city full of monuments, attractions and beautiful beaches.

This is, therefore, a great choice for a weekend getaway filled with art, sea and good food!

How to get to Livorno

You can get to Livorno by car, train, bus, plane and, of course, by ferry.

Being in central Italy, it is easily accessible from various parts of the country thanks to highway connections. On the other hand, if you want to travel by train, you can count on the Genoa-Rome railway line.

For those traveling by plane from abroad or from more distant parts of Italy, the closest airport to Livorno is Galileo Galilei Airport in Pisa (25km away). You can take a shuttle from the airport to Pisa train station and then continue by train to Livorno. Livorno train station is located quite close to the historic center.

Taking the ferry to Livorno is among the best ways to get directly to the city and also travel with your vehicle on board. There are frequent connections from some ports in Sardinia, Sicily and Corsica to Livorno. 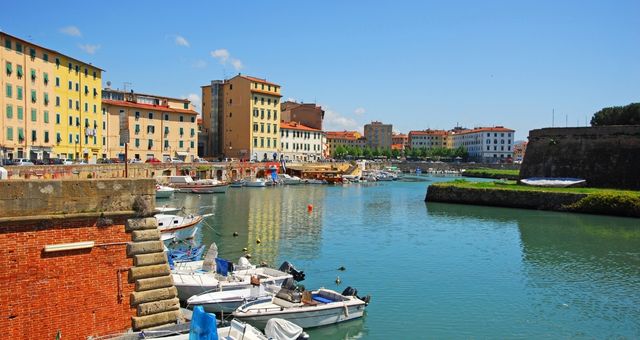 What to do in Livorno

Livorno is a “young” city (born about 500 years ago) with a lot to offer, from sea and culture to food and wine. By wandering around it on foot, you'll discover a historic center full of cultural attractions and monuments that offer evocative reminders of a prosperous past.

You’ll be amazed by the city’s Venetian-style canals, colorful buildings, fortresses, and its beautiful Terrazza Mascagni, a large checkered terrace overlooking the sea. Take a stroll along the city's waterfront and devote a day to the magnificent beaches nearby.

And between breaks, enjoy the unmissable Livorno street food or fresh seafood dishes at a traditional trattoria downtown.

If you stay a few more days in Livorno, we recommend going on an excursion to the islands of Capraia and Gorgona or trekking at the beautiful Calafuria Nature Reserve.

Livorno's coastline is among the most beautiful and famous in Tuscany. You’ll find many bays, coves, jagged cliffs, and gulfs for all tastes along the Maremma coastal area.

Here are 6 beaches in and around Livorno not to be missed: 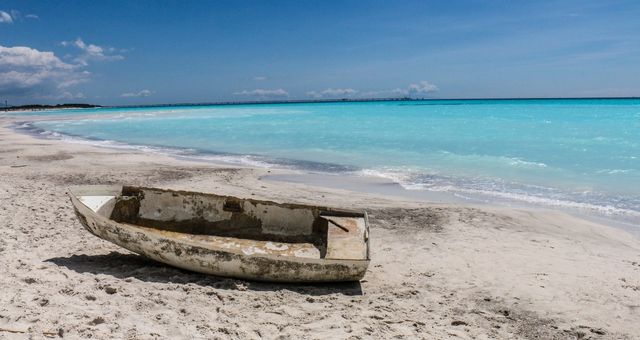 An abandoned boat on a beautiful white sand beach in Vada, Italy

Livorno is a city rich in history and culture. In fact, in the streets of the historic center and near the port, you can admire several architectural beauties that date back to the time of the Medici and Lorraine families.
Here are some must-visit attractions during your stay in Livorno: 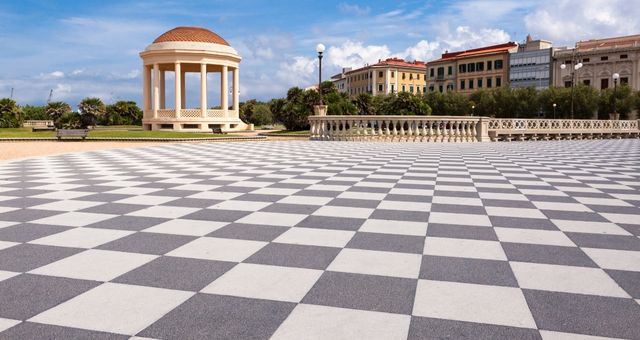 Livorno is just as lively at night as it is during the day.

During the summer, the city's nightlife is concentrated on the waterfront, while in winter people tend to hang out in the historic center and in the Venezia Nuova neighborhood. Around Attias Square there are various aperitif clubs, bars and restaurants.

If you prefer partying at clubs, you'll want to visit the region of Versilia or Castiglioncello. Some clubs are open only in the high season, so you need to inquire first.

Livorno's gastronomy stands out among Tuscan culinary traditions because of its perfect mix of gastronomic creativity and seafaring traditions. In other words, although there is never a shortage of fresh fish on a Livorno table, it is not the only option.

And to top it all off, you can’t leave Livorno without tasting ponce alla livornese, the legendary drink made with coffee, rum and sassolino (liquer).

Here are some delicacies to try during your trip to Livorno:

Tip: for the best cacciucco in town, you should visit La Vecchia Livorno trattoria. The fish here is very fresh and everything is made on the spot, even the desserts!

What to visit around Livorno

During your stay in Livorno you could take the opportunity to visit some beautiful places along the Etruscan Coast.

Here are some suggestions:

Here are 4 tips that we hope will be helpful to you before your trip to Livorno:

Livorno is a city that offers all kinds of services to its visitors.

The port city offers several accommodation options to suit different budgets. While the Venezia district (“Little Venice”) is the most picturesque in the city, with many bars and restaurants, it isn’t home to many hotels. To the south of Little Venice, lies the modern part of the city, home to the port and the city’s residential quarters.

For those who want to bring home with them a souvenir from Livorno, there are also shopping centers around the port. If you have to take the ferry the next day, the best option is to stay near the port. There are bars, restaurants and budget-friendly accommodations in the area.

As for health care, Ospedali Riuniti is the main hospital facility in Livorno, with several buildings between Viale Alfieri and the city center.

Useful phone numbers for your stay in Livorno

Here are some numbers that could prove useful during your holiday in Livorno:

In Livorno, you can get around easily on foot. The historic center is not very large, so you can walk through the main streets and reach the waterfront. Make sure to pass by Via Grande, one of the busiest streets in Livorno.

If you prefer to take the bus, you can take advantage of the LAM services, which run north to south of the city thanks to the red and blue lines. Tickets can be purchased from tobacconists and newsagent’s stands. Furthermore, thanks to the bike lanes along the waterfront, you can also ride your bike for several miles in total peace.

There is also a funicular railway in Livorno that connects the lower city with the Sanctuary of Montenero. From here you can enjoy a beautiful panorama of the entire coastline up to Castiglioncello and Punta Righini.

If, on the other hand, you arrive in Livorno by car, you should keep in mind that the center is a Limited Traffic Zone (ZTL). However, you can always leave it at various private or public parking lots with metered parking. 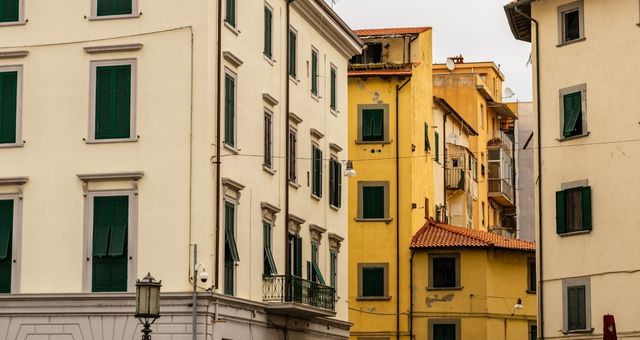 The colorful buildings in the center of Livorno

The port of Livorno is among the main ports of call in Tuscany for passenger and cargo traffic. In fact, it’s one of the largest in the Mediterranean. Ferries to Sicily, Sardinia, Corsica, and the Tuscan archipelago depart from here.

It is divided into old (porto vecchio) and new (porto nuovo) ports, and there are various services in the area, such as bars, restaurants, rentals, and hotel facilities.

You can reach the port by bus from Livorno's central station to Piazza Grande, which is near the port area. As for parking, there are several paid car parks near the marina entrance.

From Livorno you can easily reach a number of destinations in Italy and even abroad by ferry.

There are direct routes to Olbia and Golfo Aranci (in Sardinia), to the Sicilian port of Palermo, to the island of Capraia (in the Tuscan archipelago), and to Bastia (in Corsica).

The routes are operated by the companies Grimaldi Lines, Moby Lines, Corsica Ferries, and Toremar.

Here, you can find more information about the direct routes from the port of Livorno:

Tip: on our Map of ferries, you can find more about the available connections and schedules, so that you can easily and conveniently book ferry tickets from Livorno. 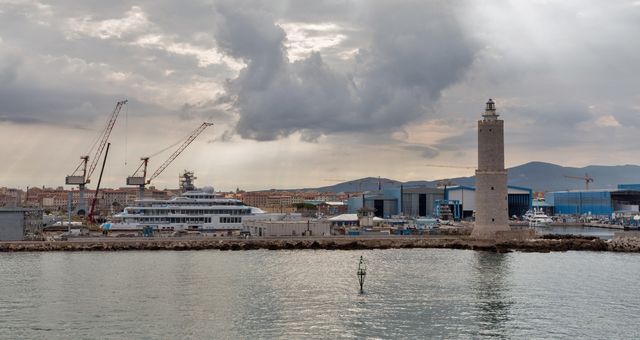 One of the docks at the busy port of Livorno

Where to book ferry tickets online to Livorno?

Book ferry tickets from Livorno to Sardinia, Sicily, Corsica, and the islands of the Tuscan archipelago online on Ferryhopper with no extra fees. Find all the information you need about ferries to Livorno, compare companies, trip duration and ticket prices, and organize your trip in just a few clicks.