The port of Almería is a major starting point for trips to North Africa. The beautiful Andalusian city is distinguished for its multicultural tradition and grand medieval history. On Ferryhopper, you can explore all ferry routes and plan the ferry crossing across the Alboran Sea with cheap ferry tickets.

Find useful information about the ferry port of Almería and read about your holidays in the city:

The port of Almería is a busy transport hub both for passengers traveling to North Africa, as well as cargo ships. The modern port has been in development since the 19th century, but Almería has been an important maritime stop since Medieval times.

The port is well integrated with the city of Almería. It is also close to interesting attractions, restaurants, cafes, shops and supermarkets. You can easily walk from the city center to the ferry terminal building.

The ferry companies currently operating at Almería port are Baleària and Trasmediterránea. Naviera Armas was also operating the port of Almería prior to the coronavirus outbreak.

The port has a large, shaded parking area for passengers boarding the ferry with their vehicles. There’s also an open-air public car park at the Muelle de Levante dock with direct access to the port area. The public car park is both for short-term and long-term stays.

As for traveler services, there are duty-free shops, ticket kiosks, tourist information points, cash machines, cafes, toilets and Wi-Fi in the main building.

From the port of Almería, you can normally catch a ferry to Melilla, as well as Nador in Morocco. In the past, there used to be crossings to Ghazaouet and Oran in Algeria too.

See more information below about the ferry routes from Almería port to the African peninsula:

Where is the ferry port in Almería?

Almería is on the southeastern coast of Spain in the region of Andalusia. The port of Almería is perfectly situated in the city center right below Parque Nicolás Salmerón.

How to get to Almería port?

You can reach the port of Almería on foot, by car or bus. It's just a 15-minute walk from most downtown hotels and the central market.

If you’re driving to the port, you can follow motorway A7 and take exit 438. As for taxis, you can hail one in the street or get one from the major points of interest around the city.

As for the public transport, there are plenty of buses passing by the port, including bus routes 1 and 6. Also, the train station is only a 10-minute walk from the port and the airport is 20 minutes away by car. 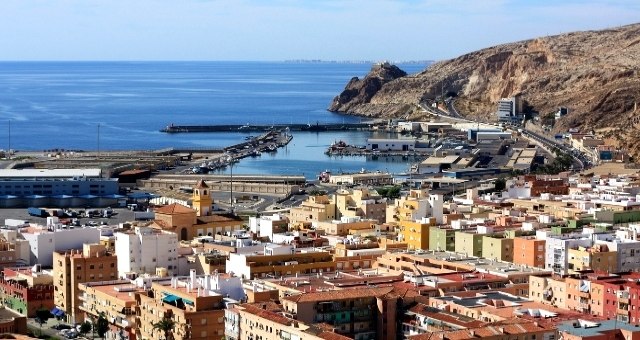 The city and port of Almería as seen from the Alcazaba

Almería is a lively city with much to see and do all year round. The port city is extra popular during the summer months both because of its amazing beaches and sunny weather, as well as its port connections to North Africa.

Many travelers choose to spend 2-3 days in Almería before taking the ferry to Melilla or stay for the entire summer to explore the whole region with its many hidden gems. The coast of Almería as well as the majestic inland are two of the most unexplored regions in Andalusia!

From natural parks and hiking trails to intense nightlife and secluded beaches, Almería is a great choice for a city break or nature-oriented holidays.

Good to know: there are many expats from the UK and more countries buying property in Almería. The city attracts international visitors because of its high-end services, relaxed vibe and clear blue sky.

How to get to Almería

You can get to Almería by plane, bus, train and ferry. If you’re visiting Almería from elsewhere in Spain, you can reach the city with your own vehicle too.

As for land transport, there are buses and trains arriving at Almería’s Intermodal station year-round. You can get a train or bus to Almería from major cities and towns in Spain. Trains are normally operated by Renfe and buses by Alsa.

As for ferry routes, you can currently get to Almería from Melilla and Nador.

Tip: the airport of Almería is connected with the city center by bus route 30. The ticket price is around €1. 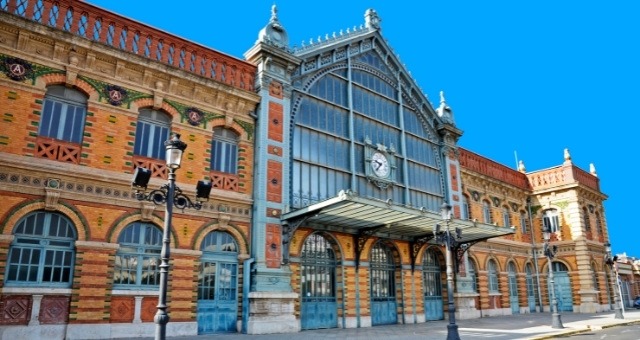 What to do in Almería

Almería is a fabulous tourist destination in the south of Spain with a rich history and cultural production. It perfectly combines tradition with cosmopolitanism and it is popular both with locals and international travelers.

You should not miss out on the Museum and the Cathedral of Almería, as well as the Guitar Museum, dedicated to the work of the great guitarist Antonio de Torres Jurado. As for outdoor activities, we recommend hiking in the Cabo de Gata-Níjar Natural Park and trekking in the Tabernas desert.

Almería is also one of the sunniest cities in Europe, which makes it ideal for activities like hiking, horseback riding, sailing or a picnic in the countryside. Moreover, the region of Almería is an oasis of unspoiled beaches for every taste! Impressive rocks, golden coasts, family-friendly beaches and nude-friendly coves are waiting for you.

Tip: Almería normally experiences dry, short winters with temperatures rarely falling under 10°C. It does get windy in the winter months, but you can still enjoy your time in nature.

In Almería, you will find some of the most amazing beaches in Spain! The region is well known for its beautiful, unspoiled beaches. They are divided into 4 geographical areas from east to west: Levante, Cabo de Gata, Almería Bay and Poniente.

The year-long sun and the variety of landscapes make Almería a hot destination when it comes to holidays at the beach. There are secluded coves for peace and relaxation, busy coasts with visitor amenities, as well as remote sandy coasts perfect to escape the city!

Here are our 10 favorite beaches in Almería:

Good to know: many of the beaches in Cabo de Gata are popular for clothing-optional swimming and sunbathing! Sightseeing and activities in Almería

In Almería, you can have fun exploring the countryside, visiting the city’s museums or trying outdoor activities in nature. From war monuments to an impressive desert (!), the region attracts history buffs and nature enthusiasts alike!

Here are some of the best attractions and activities in Almería:

Almería is one of the best party places in Andalusia! There are beautiful terrace bars for tapas and drinks in the city center (also known as the Cuatro Calles neighborhood), as well as restaurants and beach bars along the city coast.

Apart from the old town and the beach, many locals choose Plaza Masnou for their night fun. There are many casual bars hidden in the paved alleys of the neighborhood.

As for dancing, Almería’s clubs do not disappoint! Particularly during the summer months, there are many venues, where you dance all night long. Bear in mind real fun starts at 2 am in Almería!

Simple ingredients, age-old recipes and a real love for food distinguish Almería’s cuisine. At the beachfront fish restaurants, city center tapas bars and fine-dining restaurants around the region, you will taste delicious dishes.

The local gastronomy is influenced at large by the Andalusian tradition, as well as the Mediterranean climate. At the same time, Arab flavors and techniques have also enriched the Almería food scene.

Here’s what you need to try in Almería:

Here are the 7 best places for day trips around Almería: 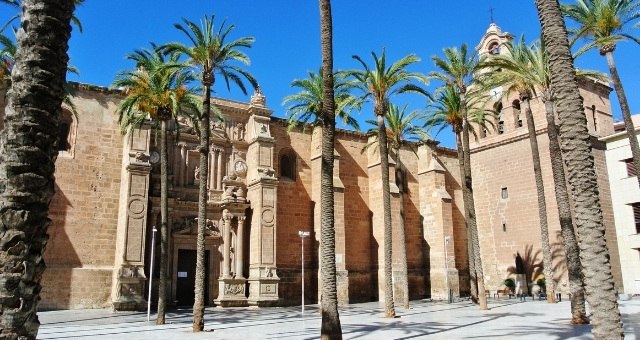 The beautiful square at the cathedral of Almería

Almería is a city combining modern and traditional elements. There are quaint neighborhoods, as well as modern spots. The city is lively throughout the year and there are plenty of visitor amenities for your holidays in the city or your trip to catch the ferry.

In Almería, you can stay at luxury 4-star hotels, budget-friendly hostels with an easy-going vibe or vacation rentals for longer stays. Most of the hotel options are in the historic city center and the Nueva Almería neighborhood. If you want to be closer to Cabo de Gata, you can also stay at the amazing Camping Los Escullos or the campsite of your choice in the area.

As for medical services, there are well-equipped hospitals such as the Torrecárdenas University Hospital and the Hospital HLA Mediterráneo. You can also find smaller clinics and pharmacies all around the city.

Tip: remember to have up-to-date health insurance or get your European Health Insurance Card in advance.

Important phone numbers for your stay in Almería

Here’s some useful contact information for your trip to Almería:

To get around Almería you can walk, use the bus or ride a taxi. Almería is a small city with a bustling city center, where you will find anything you need. There are many hotels, museums, shops and visitor services, which are accessible on foot.

As for public transportation, buses in Almería are frequent and reliable. There are plenty of bus stops around the city served by 16 bus routes. Buses cover most of the city, transferring passengers from the port area all the way to Torrecárdenas University Hospital in the north, as well as to the airport of Almería on the east coast.

There are also taxis in designated areas in the city center. You can also hail taxis or call a radio taxi to pick you up.

Good to know: for trips to the suburbs or Almería, as well as neighboring towns and villages, you can get a bus or train from the Intermodal Station of Almería at Plaza de la Estación. 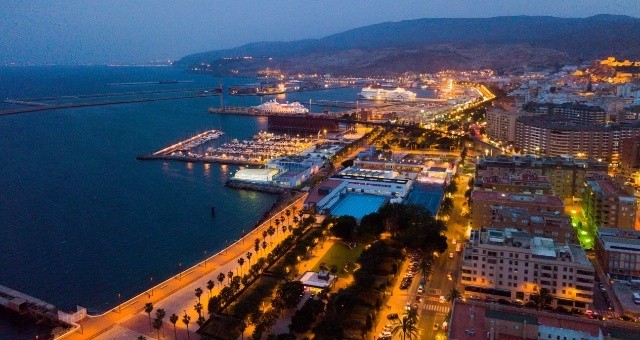 Evening lights at the port and promenade of Almería

Where to book ferry tickets online from Almería

On Ferryhopper, you can book tickets from Almería to Melilla in just a few clicks. Find all the information you need about ferry schedules from the port of Almería, check our Map of ferries for available ferry crossings, compare ferry companies, and book tickets with no extra fees!