From Piraeus to Mykonos in 2.5 hr with the WorldChampion Jet

Travel with the Seajets' extra-fast ferry

Want to travel to the Cyclades in no time? Seajet’s impressive WorldChampion Jet is one of the fastest high-speed ferries in the world and guarantees a fast, smooth and comfortable trip.

See where in Greece you can sail with Seajets' WorldChampion Jet, and book ferry tickets on Ferryhopper at no extra cost! 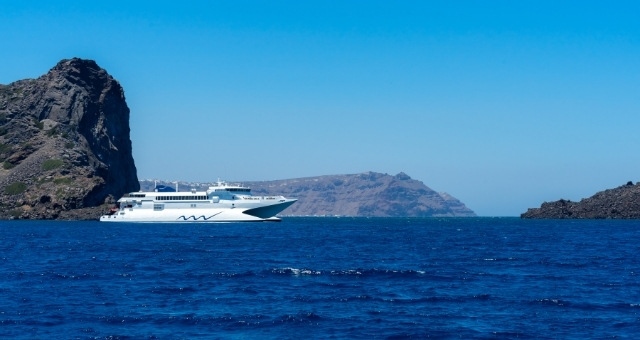 Traveling to your favorite Greek islands has become easier and faster than ever with this record-breaking high-speed ferry! The WorldChampion Jet of the Seajets ferry company is a large, comfortable and lux high-speed vessel that allows you to travel to the Cyclades fast and in style!

The WorldChampion Jet can reach a speed of up to 50 knots and it can carry up to 1,310 passengers and more than 200 vehicles.

The Seajets fast ferry features platinum and business-class lounges, a restaurant, a kids’ area, pet facilities, shops, and amenities for people with disabilities.

The modern vessel connects Athens with the islands of the Cyclades and is the best and fastest way to start your summer experience and go island-hopping in Greece!

Traveling to Mykonos, Naxos and Santorini with the WorldChampion Jet

In 2023, you can travel to the beautiful Cyclades with the WorldChampion Jet ferry by Seajets. There are frequent ferry crossings from Athens (port of Piraeus) to many sought-after Greek islands, including Mykonos, Naxos, Santorini, and more destinations!

Explore the most popular ferry routes for 2023 with the high-speed ferry WorldChampion Jet below:

The Piraeus - Mykonos ferry route is one of the most popular in Greece, with many travelers departing from the main port of Athens to Mykonos on a daily basis.

With the WorldChampion Jet you can reach Mykonos in 2.5 hours! Conventional vessels make the trip from Athens to Mykonos in 4-5 hours.

Travel from Piraeus to Naxos by ferry in 3.5 hours

Ferry tickets from Piraeus - Naxos sell out fast for the summer months, as the island of Naxos is one of the all-time-favorite destinations in Greece.

With the high-speed ferry WorldChampion Jet you can reach Naxos in less than 3.5 hours! It takes 4-5 hours to reach Naxos with conventional vessels or other ferry companies.

It goes without saying that the ferry crossing from Piraeus - Santorini is the ultimate Greek summer trip! As Santorini is located in the southern part of the Cyclades, getting to the island via high-speed ferry is the best way to go!

It takes the WorldChampion Jet ferry less than 5 hours to reach the port of Athinios in Santorini! When traveling with conventional vessels, the average crossing duration from Athens to Santorini is 6-7 hours.

Tip: want to visit both Santorini and Mykonos during your holiday in Greece? Find out all about Santorini - Mykonos ferries in 2023.

Don't miss the chance to travel around the Cyclades, take a day trip from Santorini, and go island hopping with one of the fastest ferries in the world!

You can find all cheap ferry deals for Mykonos, Naxos, Santorini, and more islands in Greece to book ferry tickets with a discount on Ferryhopper.

Ferry company Seajets is synonymous with speed and comfort in the Greek seas, and it also supports the Greek car-racing championship.

On board the high-speed giant, passengers can find an original Minardi Formula 1 car, which was driven by racing driver Jos Verstappen in the 2003-2004 season. While traveling to the Greek islands with WorldChampion Jet, the fastest Greek ferry, you can have a look at this impressive Formula 1 car, take a picture and feel the speed! 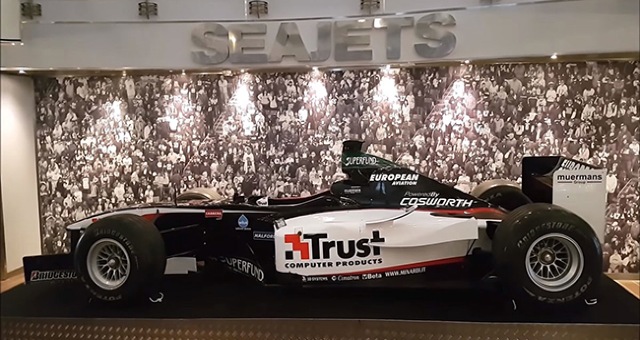 The impressive Minardi Formula 1 car on the ‘WorldChampion Jet’

How to book ferry tickets with the WorldChampion Jet?

Do you want to reach your favorite Greek island as fast as possible? Then, you should definitely book your ferry trip in the Aegean Sea with the WorldChampion Jet on Ferryhopper!

On Ferryhopper, you will find all available ferry routes served by the WorldChampion Jet: from Piraeus to Mykonos, Santorini, Syros, Naxos, and Ios. Choose the best time for your trip, book tickets and extra services to upgrade your ferry experience, and prepare to travel at maximum speed!

Tip: if you’re looking for ideas about more islands to visit during your summer vacation, have a look at the most popular Greek islands for 2022!