Formentera belongs to Spain's Balearic Islands. Famous for its stunning natural beauty and gorgeous beaches, this unspoiled Mediterranean paradise is an ideal destination for peaceful holidays. Find all the information you need about Formentera: what to see, what to do, best beaches, food recommendations, and ferry schedules. Compare prices and book cheap ferry tickets to Formentera on Ferryhopper. 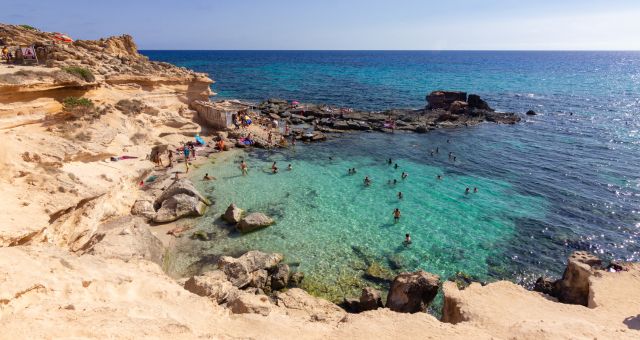 Formentera is the smallest island in the Balearic Islands and is located south of Ibiza in the Mediterranean. In fact, it is often referred to as Ibiza's "discreet little sister," since it is just a 30-minute boat ride from the popular party island.

Formentera is home to some of the best beaches in the Mediterranean - if not in the world - and it is well known for its stunning landscapes and turquoise waters. The island has a laid back vibe and it is said that, along with Ibiza, it used to be a popular meeting point for hippies traveling from Europe to India.

The people of Formentera have been striving to protect the island's unique environment and to promote sustainable tourism. Did you know that in 2019, the Council of Formentera introduced a limit on the number of vehicles allowed on the island in an effort to reduce traffic and pollution? This has made the island the capital of ecotourism in the Balearics.

How to get to Formentera

Traveling to Formentera is easy and convenient. The island can only be reached by ferry from either the ports of Dénia and Barcelona in mainland Spain or from Ibiza. The port of Dénia is the one closest to the island, with the ferry ride taking about 2 hours. There are also several daily ferry crossings from Ibiza to Formentera, as the distance between the two islands is only 19km.

You can find more information about ferry schedules and tickets to Formentera here.

What to do in Formentera

Since Formentera is famous for its sprawling beaches with crystal-clear waters, swimming and soaking up the sun are two of the main activities on the island. But that is not all that attracts visitors to Formentera.

From picturesque villages and impressive caves to old watchtowers and lighthouses, the island has plenty for you to discover. And when the night falls, head to the local bars and restaurants to have a drink and try Formentera's delicious local dishes!

Sounds exciting? Read on to find all you need to know about your trip to Formentera. 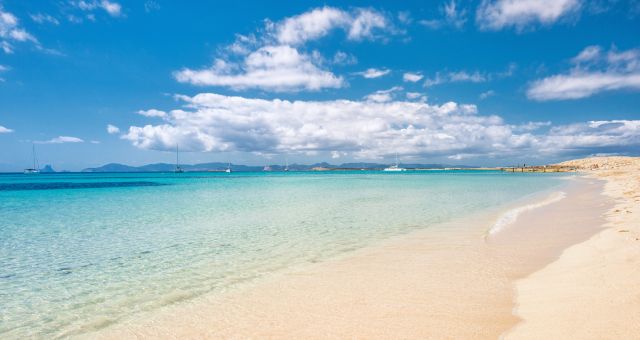 Formentera’s beaches are renowned for their rustic beach shacks, their blindingly white sand and their amazing turquoise waters. Hire a bike or walk from beach to beach and prepare to be wooed by Formenteras' spectacular coastal landscape.

The best beaches in Formentera are:

Tip: if you want to escape the crowds, Ferryhopper recommends going for a day trip to S'Espalmador, an uninhabited little island with dreamy beaches next to Formentera. To get there, take the small Barca Bahia boat from the port of La Savina or the beach of Ses Illetes.

Formentera has a long history. In fact, archaeological evidence indicates that it was first inhabited in 2000 BCE. The island has many sites that are worth visiting and due to its small size, it is easy to explore even by bike.

Some of the best things to see during your vacation in Formentera are: 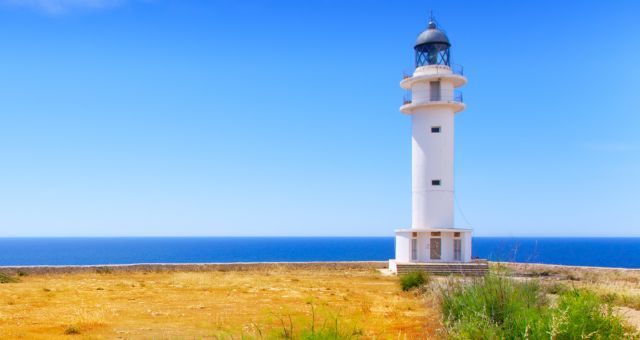 While Formentera is much quieter than nearby Ibiza, it is still exciting and fun. You can start your evening by watching the sunset, while sipping a cocktail at one of the island's famous chiringuitos.

Later on, head to the town of Es Pujols, a popular tourist resort and the heart of Formentera's nightlife. There, you can party until dawn at some of the best bars and nightclubs on the island (Banana’s & Co is the most famous one). Formentera's capital, Sant Francesc Xavier, has a more relaxed atmosphere, with live jazz gigs every Saturday night at the square of the city.

Like in all the Balearic Islands, Formentera's cuisine is delicious and full of Mediterranean flavors. If you are visiting Formentera during the summer, make sure that you book a table in advance, as restaurants can get quite busy. We recommend going to the restaurant El Mirador to enjoy a truly spectacular view of the sea.

Some local dishes and delicacies that you should definitely try are:

With their small squares, picturesque churches and Mediterranean architecture, Formentera's villages are ideal for leisurely walks - especially since most of them have been fully or partially pedestrianized. Enjoy your drink at the charming open air café-bars, try the mouthwatering local cuisine, shop at the artisan market and marvel at the panoramic views!

Here are some Formentera travel tips that we hope will be useful to you during your stay in the island:

Formentera does not have an airport, so the only way to reach the island is by ferry. One of the best places to stay in Formentera is the capital and largest village, Sant Francesc Xavier (or Sant Francesc de Formentera), which is located only 3.5km from the ferry port of La Savina (about 5 minutes by car or 15 minutes by bike).

In Sant Francesc Xavier, you will find most of the island's supermarkets, mini markets, ATM machines, shops, restaurants and cafés, as well as a pharmacy and a hospital. The port of La Savina and the villages of Es Pujols and Sant Ferran de ses Roques also have several amenities for visitors.

In regards to your accommodation in Formentera, if you are looking for a family-friendly area, then we would recommend Playa de Migjorn on the south coast, since it is a very peaceful area.

Important phone numbers for your stay in Formentera

Here are some useful contacts to keep handy when you travel to Formentera:

The restrictions introduced in 2019 from the legislation of the Council of Formentera, which limits the number of motor vehicles allowed on the island, apply from the end of June until the beginning of September. Therefore, in order to transport, drive and park your vehicle on the island during that time, you have to apply for a permit. For more information, you may visit the Formentera Eco website.

To get around in Formentera, you can use public transport. There are regular bus services connecting the port to the island's beaches and villages throughout the year, with frequency increasing in the summer. There is also a special circuit tourist bus route (L3) that connects La Savina, Ses Illetes and Es Pujols from mid-May till the end of October. Formentera also has taxi and sea taxi services.

Alternatively, you can move around the island on foot or bike, as it is quite flat and has an excellent network of 32 Green Routes (Rutas Verdes). You can bring your own bicycle or rent from one of the many bike rental shops. If you prefer to explore Formentera by car, the island has several car rentals, most of which are located at the port and in Es Pujols. Bear in mind that to access some beaches with a car or motorbike, you will have to pay a small fee. 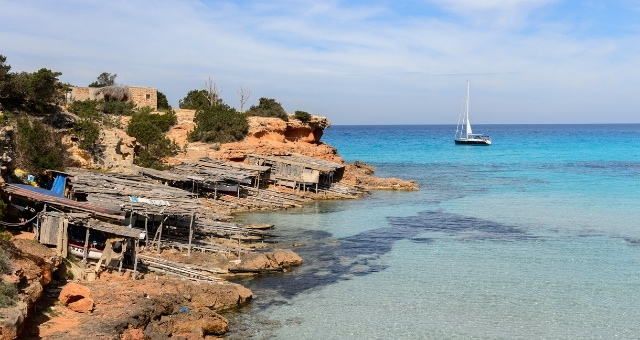 Formentera has one ferry port in La Savina, which is located on the north coast of the island about 3.5km from Sant Franscesc Xavier. It is connected to the capital and the island's villages and beaches with regular bus services.

From Formentera, you can easily get to Ibiza, as there are regular ferry routes between the two islands and the shortest journey takes only 25 minutes. You can also travel by ferry from Formentera to Mallorca. The route is usually served daily and the trip duration is about 3.5 hours.

On Ferryhopper's Map of ferries, you can see all the available ferry routes from Formentera, so that you can easily organize your island hopping in the Balearics.

You can easily take the ferry to Formentera from Ibiza, as the distance between the two islands is very small.

From mainland Spain, you can travel to Formentera by ferry either from the port of Dénia or from the port of Barcelona. Dénia is located in the southeast of Spain, between the cities of Valencia and Alicante, while Barcelona is in the northeast.

More specifically, the ferry routes from mainland Spain to Formentera are the following:

Find all available ferry schedules and compare prices for Formentera ferry tickets at a glance on Ferryhopper!

Where to book ferry tickets online to Formentera

Book cheap ferry tickets to Formentera on Ferryhopper with no hidden fees! Find all you need to know about Formentera ferries, including departure times, discounts and prices and organize your trip to the Balearic Islands with just a few clicks. Get ready to discover this paradise and experience your dreamy vacation!