Stockholm is the capital and largest city of Sweden. The “floating” city is built on 14 islands and it is located at the junction of Lake Mälar and Salt Bay. On Ferryhopper, you can find useful information about must-see places, local delicacies, and ferries to Stockholm and book your tickets easily and quickly! 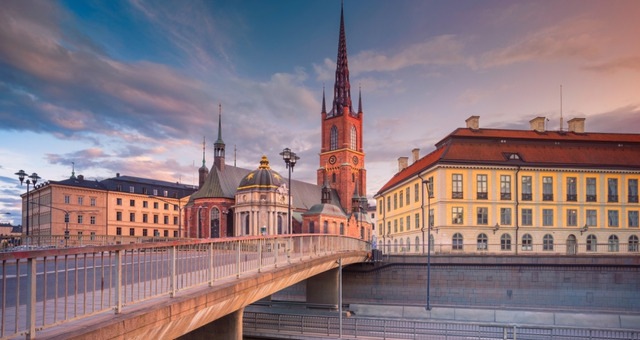 The impressive Old Town in Stockholm

The capital of Sweden, Stockholm is a vibrant city and a very popular holiday destination. The city is built on 14 islands offering diverse landscapes and different architectural styles. It’s a cultural hotspot having several museums and impressive royal palaces, niche galleries, and picturesque squares.

Also, it combines modern attractions and historic charm with abundant forests and lakes. Therefore, Stockholm is a great destination for families, couples, or friends for relaxation, adventure, and fun. So, are you ready to go?

How to get to Stockholm

You can travel to Stockholm by plane or ferry. The Stockholm-Arlanda Airport is the largest airport in Sweden connecting Stockholm to several destinations with domestic and international flights. It is located 40 km from the city of Stockholm and you can take a taxi, a bus or a train from the airport of Arlanda.

Alternatively, you can reach Stockholm by ferry. There are ferry crossings connecting Stockholm to Finland, Estonia, and occasionally Lithuania. Traveling by ferry may take longer but you can embark your vehicle.

Also, you can book a cabin for a comfortable trip while enjoying the fascinating crossing and the breathtaking views from the ferry’s dock. Therefore, if you're planning to travel by ferry you can find more information about ferry routes and schedules to Stockholm below.

What to do in Stockholm

Stockholm is an amazing city that will make you fall under its spell right away. Take a walk through the narrow cobblestone streets of the medieval Old Town (Gamla Stan) and the colorful Stortorget Square or go window shopping on the wide sidewalks and pedestrian streets of Drottninggatan.

Visit the imposing City Hall or some of the most fun and interesting museums in the world such as the interactive ABBA Museum or the Fotografiska (photography museum). You can explore the bustling area of Norrmalm, walk parallel to the countless bridges or go for a fika.

The “fika” tradition is one of the major Swedish culinary customs in which you take a break and enjoy a social moment with coffee and a piece of cake or pastry.

Also, you can have a drink in a traditional pub with a Nordic vibe or visit the hipster side of Stockholm in Södermalm. Explore the Royal Palace, and taste some delicious Swedish meatballs with lingonberries!

Finally, you can go on a boat trip in the archipelago of Stockholm and enjoy the scenic views of the Scandinavian Sea. 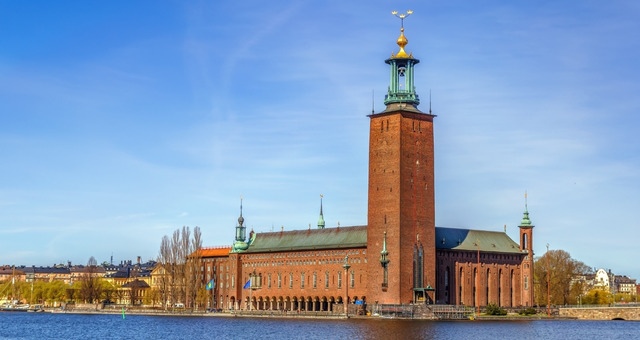 The imposing City Hall of Stockholm surrounded by sea

Stockholm is a welcoming city full of contemporary artistic corners balancing with medieval alleys and stunning natural landscapes. The city offers many options from exploring historical sites, and visiting museums to riding a bike through the wide Royal Park of Djurgården.

Here you can find a list of the top sightseeing in Stockholm: 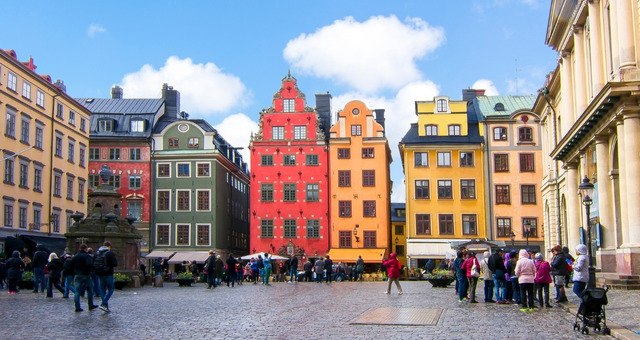 The oldest square in Stockholm, the colorful Stortorget Square

Stockholm has a vibrant nightlife and a vivid club scene with something for every taste.  For a dance nightclub in Stockholm, take your friends and head towards the Colosseum club. As its name indicates, it’s a large nightclub with dance floors, a 100-meter-long bar, and great music (Swedish pop, soul, and house music).

During summer, rooftop bars are the best option for a cocktail. Alternatively, you can go to the Östermalm area for a drink with amazing sea views or a delicious dinner.

Also, Stockholm's rich cultural scene boasts many amazing festivals such as the Baltic Sea Festival or the Jazz Festival which takes place every October. However, keep in mind that most festivals are held during the summer months.

Internationally, the most renowned Swedish culinary tradition is the köttbullar (meatballs). However, Swedish cuisine has several finger-licking dishes such as reindeer with lingonberries and mashed potatoes, meat stew, pea soup,  or seafood. Here are some of the most delicious local delicacies to try during your stay in Stockholm: 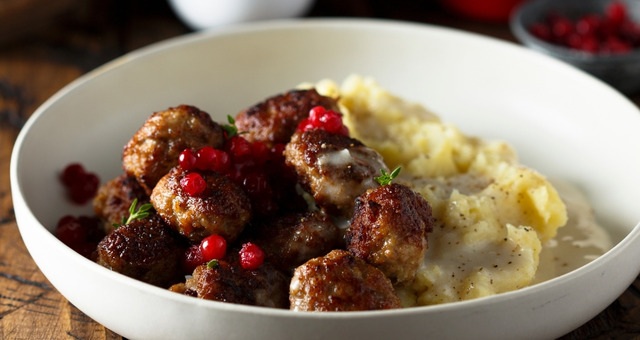 The traditional Swedish dish with meatballs and lingonberries

Here are 4 tips for your stay in Stockholm:

Stockholm is the capital of Sweden, a lively city with modern and impressive architecture. It has highly developed tourist services and there are things to see and do all year long.

As for the accommodation, you can find many options depending on your style and budget. If you want to go sightseeing, the best area to stay is near the Old Town (Gamla Stan) or in Norrmalm.

As for hospitals, there are several options in the center of Stockholm and the suburbs in case of emergency.

Important phone numbers for your stay in Stockholm

Here are some useful contacts for your trip to Stockholm:

Stockholm is a great city for walking and exercising, full of wide parks and waterways. If the weather is nice, you can take a walk around the city districts of Norrmalm and Gamla Stan (Old Town).

However, if you need to use public transport, Stockholm has a very efficient transportation network. Therefore, you can get around the city easily with the metro, bus, or boat ferry.

Taking the boat ferry is easy and it costs the same as the metro rides. Plus, you can enjoy scenic views while moving from one island to the other. Alternatively, you can rent a bicycle. Cycling is very common as the city has many well-designed bike lanes. Therefore, you can explore the city easily and safely.

Tip: Stockholm's subway is considered the world's longest art gallery with many awe-inspiring stations. You only need a valid subway ticket to explore the "art exhibit" and you can even join a free guided art tour (in English). 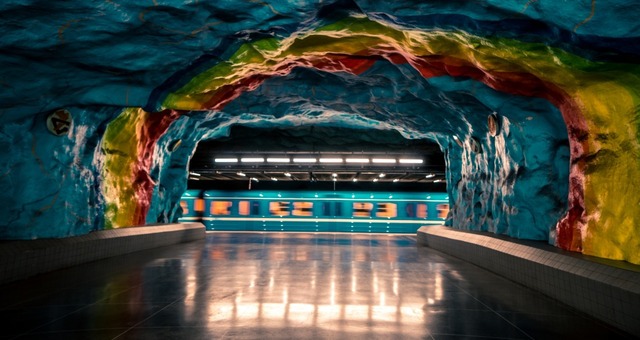 The port of Stockholm is Frihamnen (also known as Värtahamnen) and it’s located on the eastern Swedish coastline. The port operates as a cargo handling facility but also a berth for cruise ships.

There are many board ferries, cruise ships, and yachts that operate from the port of Stockholm, carrying passengers to and from Sweden, Finland, and Estonia.

The port of Stockholm can be reached by ferry from Finland (Mariehamn, Åland, Långnäs, Turku) and Estonia. The companies that operate the connections are Tallink and Viking Line. Here you can find more information on the ferry connections to Stockholm:

Occasionally ferry operators such as Viking Line and Tallink-Silja offer trips between Stockholm and Riga, especially in the summer months. 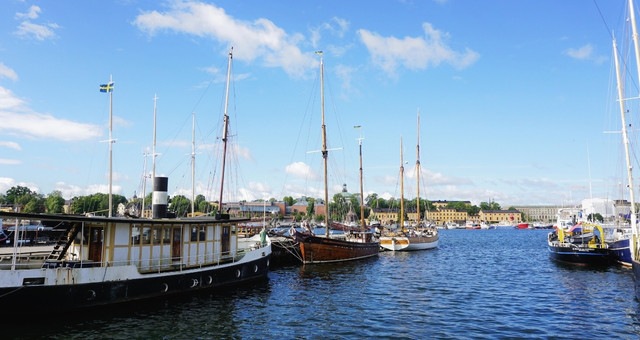 The beautiful port of Stockholm

Where to book ferry tickets to Stockholm online

On Ferryhopper, you can find all available ferry routes to and from Stockholm on our Map of ferries, compare prices, departure times and book cheap ferry tickets to Stockholm online at no extra cost.