Skyros is an island in the Sporades which shares many similarities with Cycladic islands. This Greek island is famous for its beautiful landscapes and it is ideal for relaxing holidays.

On Ferryhopper, you can find detailed information about your trip to Skyros. Discover the best beaches and attractions, learn more about its quaint villages, compare available ferry schedules and book your tickets online. 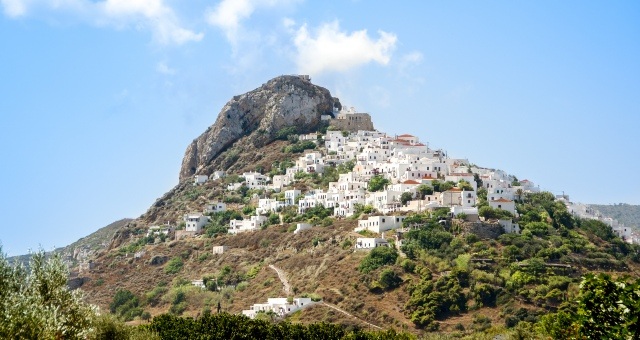 The impressive castle of Skyros above the island's capital

Skyros is the largest and southernmost island of the Sporades. Located at the center of the Aegean Sea, it is a great destination for a laid-back vacation. During your stay in Skyros, you can visit beautiful coasts and natural sites, eat fresh seafood, buy traditional artifacts and have fun in Chora, the island’s main settlement.

How to get to Skyros

There are direct ferry routes from the port of Kymi in Euboea (or Evia) to Skyros. Ferries from Kymi to Skyros depart daily and the journey lasts about 1 hour and a half.

The port of Kymi is located in the northern part of Euboea and it’s around 3 hours from Athens. You can reach Kymi by private vehicle or intercity bus (KTEL), as there are daily itineraries from Athens to the port.

You can also travel indirectly from the port of Volos to Skyros, stopping at Skopelos and Alonissos. Here, you can learn more information about ferries to Skyros.

Tip: there’s also an airport in Skyros that is connected to Athens and Thessaloniki.

What to do in Skyros

Skyros has many museums, archaeological sites and monuments, bearing testimony to its rich history. As for beaches, Skyros is guaranteed to steal your heart. Most beaches are calm and sandy, perfect for relaxation away from the crowds. There are also some beaches with visitor amenities and beach bars.

Additionally, Skyros (or Skiros) is famous for its villages and local cuisine. There are various scenic villages where you can enjoy delicious dishes, such as lobster pasta, and buy local products. Don’t forget to visit one of the farms of the island and meet the adorable Skyrian Horses!

Tip: one of the best times to visit Skyros is during the Clean Monday holiday break. That’s when the famous carnival of Skyros takes place, dating back to ancient times. Locals reenact the Dionysian rituals by dressing in costumes and walking around the alleys of Chora.

There are many amazing beaches for every taste in Skyros. You can find some beaches with visitor amenities, such as sun loungers and umbrellas, but most of them are remote and untouched. Here are 11 of our favorite beaches on the island: 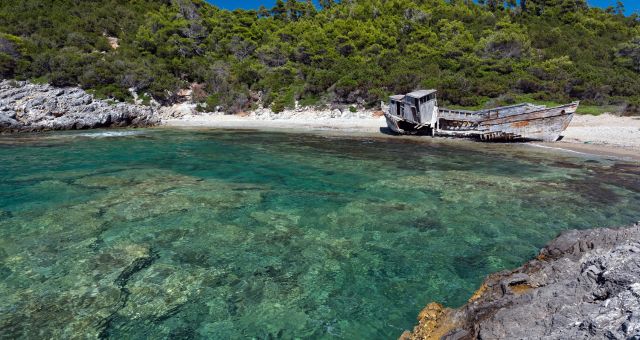 The shipwreck at Agalipa beach in Skyros

Sightseeing and activities in Skyros

During your vacation in Skyros, Ferryhopper suggests that you explore every corner of its unspoiled nature. Visit one of the traditional eco-preservation farms of Skyros to see the miniature Skyrian horses. This protected horse breed is one of the cutest animals ever (!!!) and it’s also one of the rarest breeds in the world.

Don’t miss out on a boat trip to the neighboring islets of Sarakino, Skiropoula and Valaxa, and if you’re interested in cave exploration, check out the Pentekali cave, the largest cave on the island.

In Skyros, apart from natural sites of great importance, you can also find several monuments from the Byzantine, Venetian and ancient times. Here are the top attractions in Skyros: 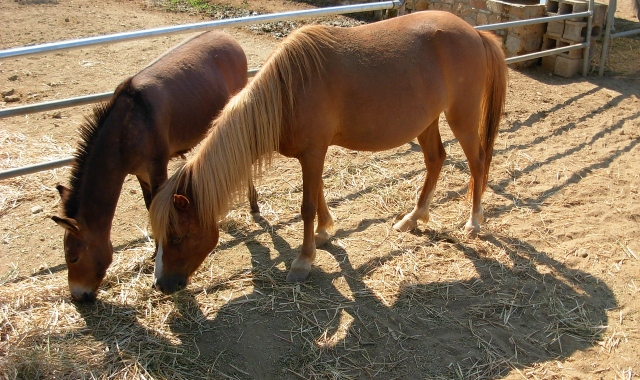 Skyros is an easy-going destination, perfect for relaxing summer nights and serenity. Travelers can enjoy drinks and delicious food at one of the many bars and restaurants that stay open until late. Most bars in Skyros are located in Chora, but there are also some lounge beach bars at Molos and Magazia.

Skyros is great for families, couples and small groups. You can enjoy a glass of Greek wine at one of the tavernas, drink delicious cocktails at the bar Kalypso in Chora and delve into the local cuisine at a restaurant.

Skyros is one of the best destinations in Greece to try lobster pasta!  Apart from fresh fish and seafood, Skyros is also famous for its mouthwatering desserts and delicious types of cheese, such as the local graviera with its distinct flavor and aroma. Here’s what to try in Skyros:

Local tip: we recommend that you try fried meatballs at Barba Giannis in Chora, as well as fresh fish at Asimenos in Aspous and Stefanos at Magazia. If you love desserts, try bougatsa (phyllo pastry filled with semolina cream) at Mitsos in Chora, ice cream at Faltaina’s Sweets and almond biscuits at Chiotis.

There are around 3,000 permanent residents in Skyros and most of them live in Chora, the island capital. It’s worth exploring the alleys of Chora with the traditional houses and visiting more villages on the island to get a glimpse of their traditional lifestyle.

Here are some of the villages worth visiting in Skyros: 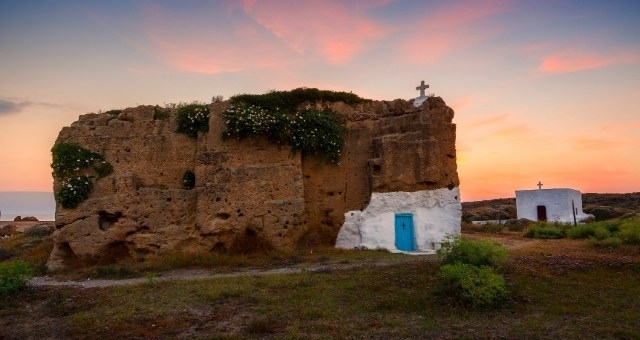 Rock-carved chapel at the village of Molos

As for shops, restaurants and accommodation, there are plenty of options around the island.

Useful phone numbers for your stay in Skyros

Here are some useful contact information for your trip to Skyros:

You can get around Skyros by private vehicle, bus or taxi. Buses serve the following route several times a day: Linaria - Chora - Magazia - Molos - Airport. For more flexibility, we recommend that you bring your own vehicle or rent a car or motorcycle upon arrival.

The main port of Skyros is in Linaria on the west coast of the island. The port of Linaria is approximately 10km from Chora and serves ferry routes to nearby islands and Euboea. You can find plenty of services there.

If you want to go island hopping in the Sporades, you can check ferry routes from Skyros to Alonissos and Skopelos. There are usually direct ferries in high season.

If you want to explore even more of the Sporades, you can continue your island-hopping adventure from Alonissos and Skopelos to Skiathos.

Find all ferry routes on Ferryhopper’s Map of ferries and plan island hopping in the Sporades step-by-step! 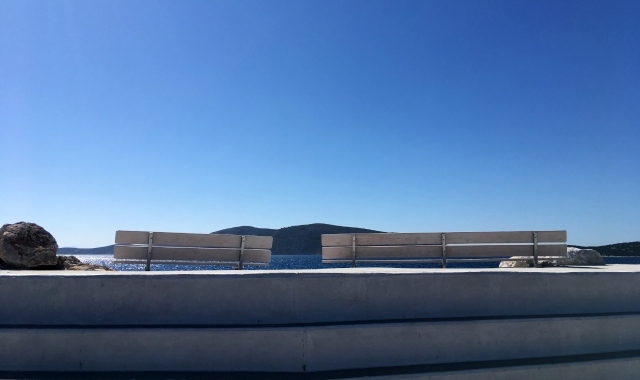 Sea-viewing point at the port of Skyros

Catching a ferry to Skyros is nothing but smooth sailing. Your most convenient option is to arrive at the port Kymi in Evia and travel to Skyros from there. You can find 1-2 daily itineraries from Kymi to Skyros all year round that last about 1.5 hours and cost €19.

Another option is to travel from the port of Volos to Skyros. There are indirect ferry routes that include Skopelos or Alonissos as an intermediate stop, lasting 8-14 hours, depending on the itinerary.

Where to book ferry tickets to Skyros online

Are you looking forward to enjoying a peaceful vacation in Skyros and the Sporades? On Ferryhopper, you can find detailed info about your holidays in Skyros, as well as all ferry routes to the island. Plan your itinerary, find ferry connections from Skyros to neighboring islands in the Sporades and get ready for unforgettable holidays in Greece!