Cádiz is an important port city in the autonomous community of Andalusia in southwestern Spain. Wondering how to get there, how to travel by ferry from Cádiz and what to see in the region?

Read our guide with the best travel and ferry tips about Cádiz, discover the top beaches and attractions, see the latest ferry schedules between Cádiz and the Canary Islands, and book the cheapest ferry tickets online on Ferryhopper.

Find useful information about the ferry port of Cádiz and read about holidays in the city: 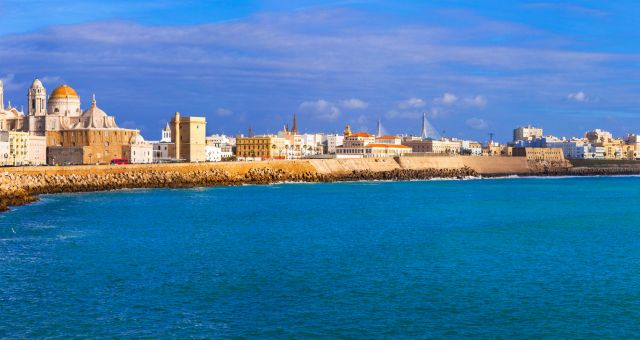 View to the port of Cádiz from the city park

The port of Cádiz serves ferry routes to the Canary Islands and it’s one of the most important sea hubs in Spain.

As for parking at the port of Cádiz, there are many public and private parking lots in the area, serving passengers taking the ferry, as well as people visiting the city.

Check Ferryhopper’s Map of ferries for more information about ferries from Cádiz, as well as ferry connections from all ports of Andalusia to the Canary Islands.

Ferries from Cádiz to the Canary Islands

You can catch a ferry from the port of Cádiz to the islands of the Canary archipelago during peak season. Occasionally, there are ferries throughout the year. The islands connected by ferry from Cádiz are La Palma, Lanzarote, Tenerife, and Gran Canaria.

Below you can find more details about all Cádiz crossings: Trasmediterránea ferry at the port of Cádiz

Where is the ferry port in Cádiz?

The port of Cádiz is in the northeastern part of the city, within walking distance from the historic city center. The ferry terminal is located close to the Tourist Office of Cádiz, right next to Paseo Canalejas park.

How to get to Cádiz port?

Its proximity to the city center makes the port of Cádiz easy to get to from most downtown hotels. The central bus and train stations of Cádiz are also located by the port.

If you’re heading to the port by car or motorbike, you can approach the terminal driving on Astilleros Avenue, which starts from highway CA35 that connects the city with Puerto Real on the inner side of the Bay of Cádiz. 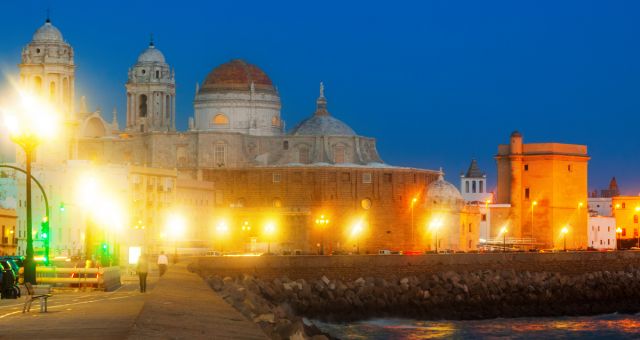 The port of Cádiz at night

The port city of Cádiz is one of the oldest continuously inhabited cities in Europe, boasting a rich and diverse history dating back to 1100 BCE. The many monuments of the coastal city take travelers through an amazing tour of the different civilizations that flourished in the small Spanish peninsula.

In Cádiz, you can swim in amazing beaches, walk in impressive parks and gardens that are home to rare plants, as well as taste some of the most delicious dishes of the Andalusian cuisine.

Cádiz is also famous for its stunning architecture perfectly combining state-of-the-art infrastructure with beautiful squares and historic buildings in the old town.

You can enjoy safe, family-friendly holidays or experience the lively nightlife of the city.

Keep on reading for more tips about vacation in the city.

How to get to Cádiz

You can easily get to Cádiz by plane, ferry, train, or your own vehicle from mainland Spain, the Canary Islands, as well as major European cities.

The closest airport to Cádiz is Jerez Airport, which is located 43km north of the port city. The airport serves regular flights from Spanish destinations, as well as large air transport hubs of central and northern Europe during the summer months.

As for ferry routes, Cádiz is connected by ferry with the Canary Islands during the summer and more popular months. Ferry company Naviera Armas, in collaboration with Trasmediterránea, currently operates all ferry routes from and to Cádiz. 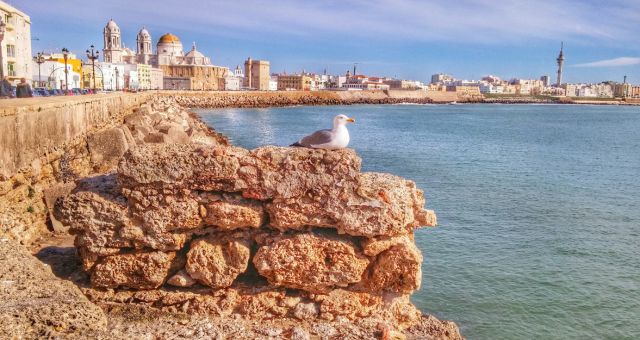 Seagull at the harbor of Cádiz

What to do in Cádiz

Cádiz is great for a week-long visit, as a stop before heading to the Canary Islands by ferry or as an Andalusian road trip destination along the southern coast of Spain.

The Spanish port city is popular with travelers mainly during the summer, but you can also enjoy the local culture off-season, during Easter or in February when the big festival takes place, such as the Carnival of Cádiz.

Get ready to enjoy atmospheric walks in the old town, take amazing photos at the many squares of the city, explore hidden urban oases with exotic plants, and swim in golden-sand beaches facing the vast Atlantic Ocean.

Ferryhopper suggests you spend at least 2-3 days in Cádiz before continuing your adventure by ferry to the Canary Islands. Visit the majestic Cathedral of Cádiz, see the impressive Roman Theater, go shopping at the local market, catch panoramic views of the city from the terrace of the Torre Tavira, and don’t forget to swim in the magical La Caleta beach.

Wanna find out more about Cádiz? Explore the top beaches in the area, learn about the most significant sights and attractions, find useful tips about getting around, and discover how to get by ferry from Cádiz to La Palma, Lanzarote, Tenerife, and Gran Canaria.

Here are some of the top beaches in the region of Cádiz for all ages and tastes: 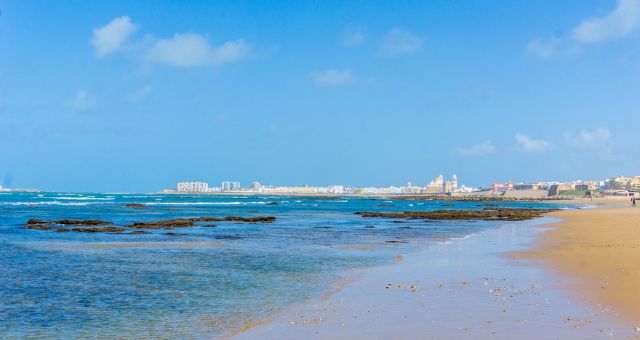 There’s much to see and do in Cádiz. The Spanish port city boasts a rich past, still evident in its urban and natural landscape.

Here are some suggestions for sightseeing in Cádiz by the Ferryhopper Team: 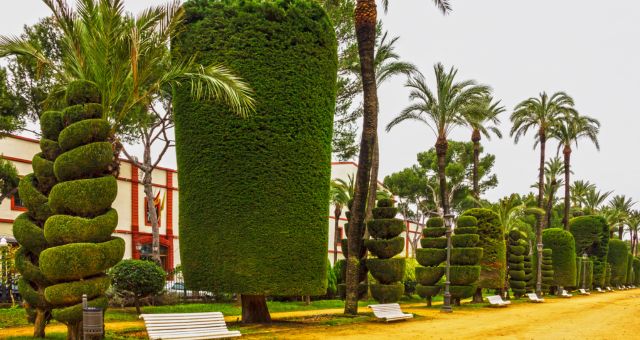 The beautiful Genovés park in Cádiz

Dancing until dawn? Check! Casual candle-lit dinner at a tapería? Check! Flamenco nights? Check! Cocktails at the beach? Check! Cádiz is one of the top cities for nightlife in Spain. Outdoor terraces, beachfront bars, fish and seafood restaurants are all over the city for a memorable night out!

You will find many restaurants and bars in El Pópulo, the old neighborhood of the city. Most bars in El Pópulo play rock or lounge music. As for nightclubs and loud venues, you can head to the city promenade.

We recommend catching an art exhibition in the city center, grabbing a bite at one of the chiringuitos by the beach at sunset, walking along Paseo Marítimo for a romantic night, going bar-crawling in El Pópulo, and head to the clubs for intense dancing and drinking!

Tip: ask locals to point you to “La Punta”, the place to be in Cádiz if you’re looking for clubs, beach parties and drinking with friends at the promenade!

Cádiz is a food lover’s paradise! It encompasses typical Andalusian dishes and tapas, as well as distinct flavors and influences from the Arab cuisine. Due to its seaside location, in Cádiz you try delicious fish and seafood.

We recommend trying the local gastronomy both at fine-dining venues, as well as local taperías and beachfront restaurants.

Here are some of the must-try dishes in Cádiz:

Here are some more useful tips about Cádiz to help make your holidays even more enjoyable: 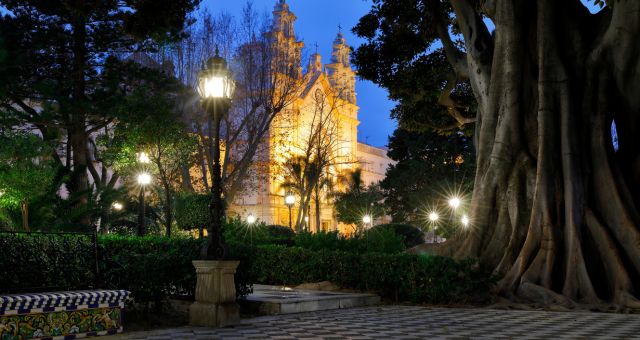 Cádiz is a modern, lively city with plenty of traveler services and amenities. There are things to see and do all year long. You can travel to Cádiz solo, with friends and family, as a couple, or with kids.

Cádiz is one of the most affordable holiday destinations in Spain, as there are many options for accommodation for all budgets. The best place to stay in Cádiz if you’re planning to explore the history and culture of the region is the old center. If you’re visiting Cádiz with your family, you can also stay along the coast in the outskirts of Cádiz, like in Victoria Beach, which offers many visitor amenities and a safe coast.

As for hospitals, there are quite a few options in Cádiz and the suburbs, so you can enjoy your vacation with peace of mind. There are both private and public clinics in the city center.

You should also know that Cádiz enjoys warmer weather during most of the year due to its southern location. During the summer months, temperatures rise up to 40°C, while in the winter it’s usually around 15°C, but it can get colder.

Important phone numbers for your stay in Cádiz

Here are some useful contacts for your trip to Cádiz:

You can easily get around Cádiz on foot or by bicycle, as the city center is quite small. If you prefer to move around the area to approach more remote places and peaceful coasts, you can do so by car, taxi or bus. There are plenty of taxi ranks and bus stations around the city.

You can also get a ticket for the hop-on-hop-off bus of the city and explore the main attractions. There’s a stop at Plaza de Sevilla.

If you’re thinking of visiting more destinations in Andalusia, you can get around by train or intercity bus. Seville, Jerez de la Frontera, Tarifa, Rota, and Huelva are easily accessible from Cádiz.

Travelers visiting Cádiz from Jerez Airport can reach the city center by car, taxi, bus, or train. Other nearby airports are located in Seville, Gibraltar and Málaga.

Tip: you can also explore the city on a boat tour. This way you get to see most of the city’s impressive monuments and natural wonders with ease. 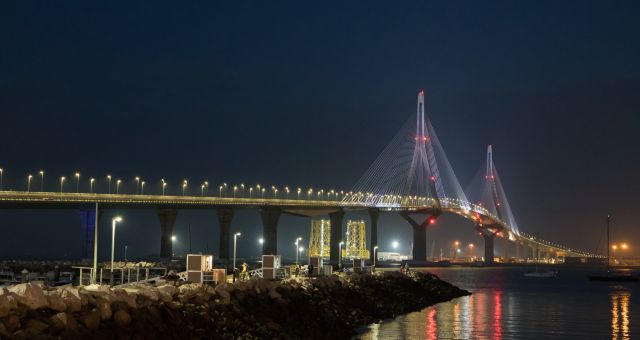 The impressive Constitution of 1812 Bridge of Cádiz at night

On Ferryhopper you can book Cádiz ferry tickets online with just a few clicks. Read our Cádiz travel info, search for available ferry routes and connections, and book your ferry trip with ease and no hidden fees!