The most beautiful carnivals in Italy

Celebrate the funnest event of the year from north to south!

The Carnival is a real tradition in Italy! Since ancient times this feast has been celebrated with elaborate costumes, impressive masks and events of all kinds. Some Italian cities stand out for their centuries-old traditions and boast the most famous carnivals in the country.

Discover the most beautiful Italian carnivals, choose your carnival costume and pack your bags! 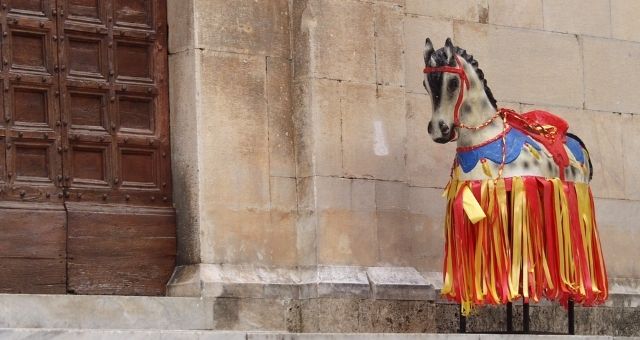 8 cities to enjoy the best carnivals in Italy

Every year the Carnival is celebrated with lots of dance, confetti, masks and fun parade floats. The events are the perfect chance for everyone to have fun and contribute to the revival of ancient Italian traditions.

Discover the best Italian carnivals from north to south and decide which will be your next destination!

Here are 8 Italian cities famous for their carnival celebrations:

1) Muggia and its "vegetable dance"

Muggia is a small city of the Friuli-Venezia Giulia region that comes alive more than ever in February.

Since 1611, the Carnival starts off with the famous Ballo della verdura (the “vegetable dance”), following a dance routine similar to the one established by Theseus when he defeated the Minotaur. Everyone dances happily wearing garlands of vegetables on their heads!

Get ready to discover one of the most unique carnivals in Italy! From the Trieste train station (a 15-minutes walk from the port), you can take bus line 20 and arrive in Muggia in about half an hour!

2) Venice: over a week of masked balls

The Carnival of Venice has always been considered the most elegant in Italy and around the world.

The historic Venetian costumes (created as a sign of freedom and transgression) consist of beautiful masks and enormous cloaks or nineteenth-century clothing and they are truly impressive. Get your camera ready, because you’ll meet people wearing them in every corner of the city!

In Venice, the Carnival opens every year with the Venetian Festival on the water, a parade on gondolas. Among the most typical shows there are also the Flight of the Angel taking place at the bell tower of San Marco and the Festa delle Marie, a spectacular procession that sees 12 Venetian girls parading and ends with the awarding of the most beautiful one.

Locals in beautiful Venetian costumes at the pier of Venice

3) Cento: the “Rio de Janeiro” of the Emilia Romagna region

Cento is a small art city in the province of Ferrara and is among the most famous in Northern Italy for its carnival. Huge floats pass through the main streets of the city, reaching the balconies of the houses!

You should also know that the Carnival of Cento is twinned with the Rio de Janeiro one, featuring the same music, costumes and samba dancers. When you see the floats approaching, stand by for the famous gettito: a throwing of gifts to the public. From candies and chocolates to gadgets and toys, no one goes home empty-handed!

Useful info: did you know that from Cesenatico you can reach the town of Cento in less than 1.5 hours by car?

4) The Carnival Parade of Viareggio

The Carnival of Viareggio is one the most spectacular events in Italy. Every year, the town of Viareggio, 40km from Livorno (in Tuscany), turns into a live stage with dance, music shows and gastronomic festivals.

The floats parade for about 2km on the main street of the city. These gigantic and provocative papier-mâché works are then exhibited at the Carnival Museum, which houses the most beautiful ones. Don't miss it! 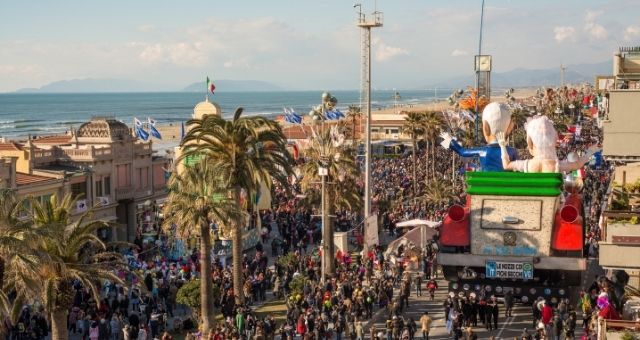 The huge parade floats of Viareggio in the city center

5) The Carnival of Fano: the oldest in Italy

Celebrated since 1347, the Carnival of Fano is the oldest in the country. This small town of the Marche region fascinates its visitors every year with art, culture, gastronomy and music.

In addition to the floats and the burning of the Pupo (the traditional Fano Carnival figure), the most awaited moment of the parade is the giro del getto: a give-away of candies, lollipops and chocolates for the spectators!

The celebrations end with the parade of the Musica Arabita (which means “angry” in the local dialect), a very particular musical band that plays music using pots, dishes and objects of all kinds, spreading a joyful atmosphere.

6) Agropoli and the beautiful parade floats of the Cilento region

Agropoli is a beautiful seaside village in the province of Salerno, famous for its Blue Flag beaches but also for its legendary carnival!

The floats parade from the promenade of Agropoli to the city center, and the magnificent creations of the local papier-mâché masters are accompanied by a festive atmosphere.

The symbols of the Agropoli Carnival are also strongly linked to the past: the traditional festival mascot of the village is Kajardin, which get its name from the leader of the pirates who invaded Agropoli in the 16th century.

Get ready to have fun with music, dance and singing competitions, and don't forget to try the delicious polpette di San Biagio (savory, deep-fried balls)! 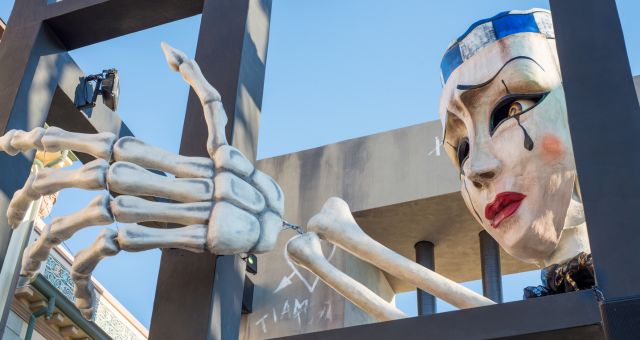 Beautiful papier-mâché work made for the Agropoli Carnival parade

Putignano is an ancient village just 30 minutes from Bari. In addition to being famous for its natural landscapes and caves, it is known for its carnival.

Among the oldest in Europe, the Putignano Carnival was celebrated for the first time at the end of 1300, when the relics of Saint Stephen were moved to the village to protect them from invasions.

The protagonists of the Carnival in Putignano are the floats made of papier-mâché, which follow a specific theme every year. Teams compete really hard to win the float competition and there’s only one winner!

Useful info: the Putignano Carnival takes place every year in the historic center and can only be accessed with an entrance ticket.

8) Acireale and the true Sicilian folklore

Acireale is a city of ancient origins and some say it is home to the most beautiful carnival in Sicily! Flower-decorated floats, masked groups and musical bands parade every year downtown.

The parade floats in Acireale are a mix of caricatures of celebrities, politicians and footballers, accompanied by bands and folk performances. There is even a contest to distinguish the most beautiful miniature floats!

Acireale could be an excellent option for an off-season trip. If you want to admire the Sicilian Baroque during the carnival, all you have to do is take the ferry to Messina and drive for about 1 hour!

Fun fact: did you know that confetti and streamers were created in Italy? In 1875, engineer Enrico Mangili came up with the idea deriving from the perforated paper used for the breeding of silkworms! 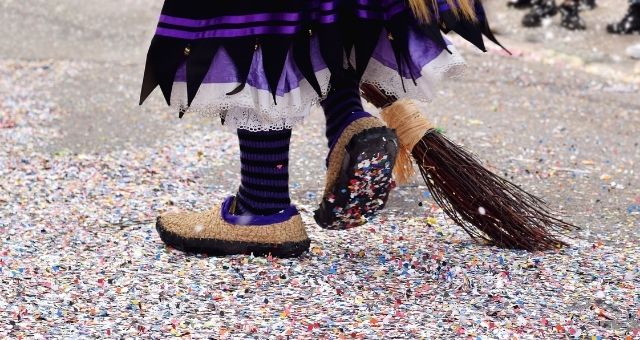 Parader walking on confetti before taking off with the broom

February is coming…have you already decided where to celebrate the Carnival? On Ferryhopper, you can find lots of useful information on how to reach the Italian Carnival cities and book your ferry tickets online with just a few clicks!

Good to know: find up-to-date ferry schedules for Italy on our page!