Ithaca is a small island in the Ionian Sea, right next to Kefalonia. It is a paradise island, with beautiful beaches, impressive archaeological sites and picturesque villages. If you want to learn information about Ithaca and its ferry connections, you should check the Ferryhopper pages and organize your ideal summer vacations.

How to get to Ithaca?

The ferry connection of Ithaca with mainland Greece is served through the port of Patra, while its ferry connection with the rest of the Ionian islands is through Kefalonia. The main port of Ithaca is Pisaetos and is 12 km (7 minutes by car) from Vathi, the capital of Ithaca.

Tip: If you want to explore every corner of Ithaca, you should consider bringing your car, as both ferry routes have the option of vehicle transportation in the ferries’ garage. 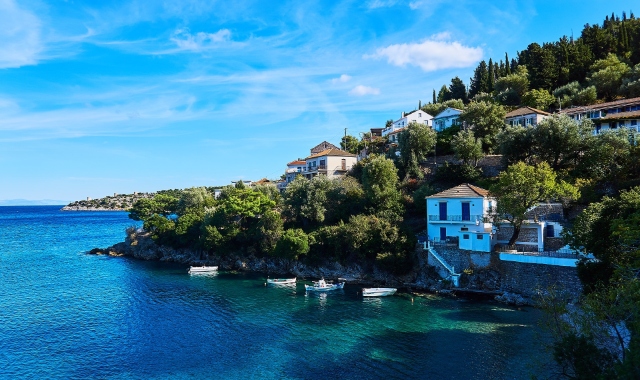 What to do in Ithaca

In Ithaca, you will definitely meet beautiful beaches with deep cool waters. History lovers can visit many impressive sites of cultural interests, while hikers can follow paths through the lush vegetation to reach the traditional settlements and amazing landscapes.

Most of the beaches of Ithaca are not organized, so you need to bring all the necessary beach equipment. Many of them are easily accessible by car or on foot, others are only approachable by sea, but all of them have crystal, turquoise waters! Ferryhopper suggests you take a dive in the waters of:

Ithaca is an island with a rich history from ancient times until today. On the island, you will find numerous sites of archaeological interest and museums, as well as landscapes of rare natural beauty which can be easily explored by the various hiking paths. Here is shortlist for your sightseeing: Ithaca produces top-quality local products such as honey, herbs, meat, and cheese. During your vacations in Ithaca. You should taste:

Useful information for your holiday in Ithaca

Ithaca is a relatively small island but with many facilities. The island has a Health Center, supermarket, banks and ATMs in Vathi, the capital of the island while the Regional Medical Center is located in Stavros. Some useful telephone numbers for Ithaca:

Where to book ferry tickets to Ithaca?

Book your ferry tickets online using Ferryhopper! Go to our search engine, find all ferry routes to Ithaca, compare prices and start your summer vacation in just a few clicks