Fuerteventura is the second largest of Spain's Canary Islands. It is known for its amazing beaches, impressive sand dunes and unique volcanic landscapes.

On Ferryhopper, you will find useful information about your holidays: how to get there, best beaches and attractions, top activities, food recommendations, and ferry schedules. Compare prices and book ferry tickets to Fuerteventura online on Ferryhopper with no hidden fees! 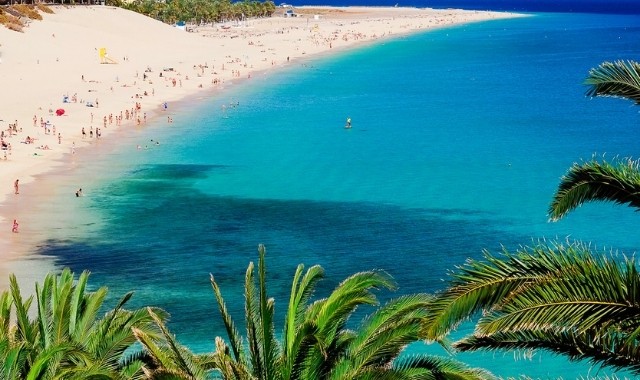 Fuerteventura is located 100km off the coast of North Africa. With over 300 days of sunshine per year and extremely low precipitation level, Fuerteventura is the perfect year-round destination for seaside holidays.

Considered to be the best in the Canary Islands, Fuerteventura's beaches are truly spectacular! Τhe winds that blow throughout the year also make them the perfect place for water sports enthusiasts.

If you feel like taking a break from swimming and sunbathing, Fuerteventura's interior is equally impressive. We recommend exploring it to marvel at the endless rolling hills, volcanic mountains and vast plains. Not to mention the quiet picturesque villages that have remained untouched by time and are definitely worth a visit. 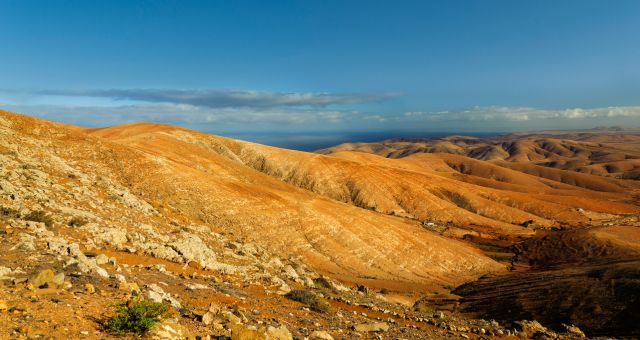 The unique landscape of Fuerteventura

How to get to Fuerteventura

Fuerteventura is easily accessible by plane and of course, by ferry.

The easiest way to travel to Fuerteventura by ferry is from the neighboring island of Lanzarote. There are several daily crossings from Lanzarote to Fuerteventura all year round and the duration of the shortest ferry trip is only 25 minutes.

You can find more information about Fuerteventura ferry schedules and tickets here.

What to do in Fuerteventura

Holidays in Fuerteventura are all about the beach: swimming, sunbathing and doing water sports are the main activities on the island. But there is more to Fuerteventura than gorgeous beaches. From endless sand dunes to imposing mountains, the island is full of unique natural sights for you to explore.

To catch a glimpse of Fuerteventura's peaceful rural life and learn more about its history, you can visit the island's pretty villages and towns as well as its museums. And don't miss the chance to try the delicious local products and dishes!

Tip: during your Fuerteventura vacation, you should not miss the chance to go on a dolphin and whale watching tour. Seeing the impressive animals in the wild is an experience you will never forget! 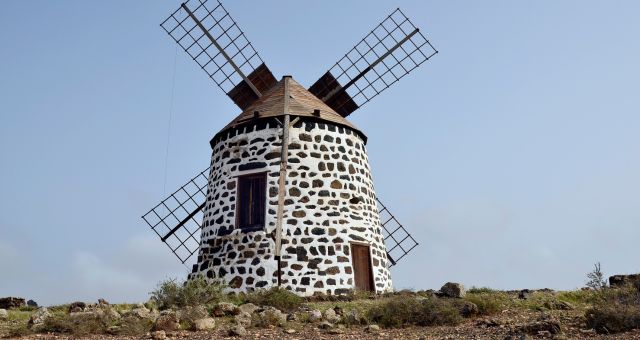 Traditional windmill near the sand dunes of Corralejo

Boasting almost 150km of fantastic beaches, Fuerteventura is the perfect destination to enjoy the sea. From long beaches with white sand and saltwater lagoons to rock-framed coves and coasts surrounded by sand dunes, the island has so many impressive beaches that you will not know which one to choose.

Here are 10 of the best beaches in Fuerteventura:

Tip: go on a day trip from Fuerteventura to Lobos, a protected islet with heavenly beaches located just 2km north of the island. Ferries to Lobos depart daily from Corralejo and the ride takes only 15 minutes. 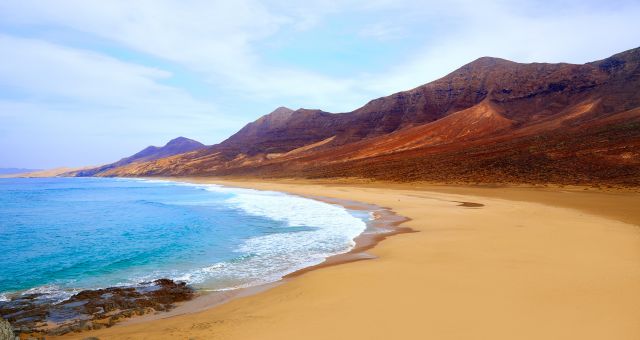 The dramatically crumbling cliffs of Cofete beach in Fuerteventura

Wondering what to see in Fuerteventura? Designated as a biosphere reserve by UNESCO due to its ecosystem diversity, the island is full of stunning natural sights. There are also many cultural attractions and museums that you can explore to learn more about Fuerteventura's history and traditions.

Here are some cultural and natural attractions that we recommend you don`t miss:

The best cultural attractions in Fuerteventura

The best natural attractions in Fuerteventura 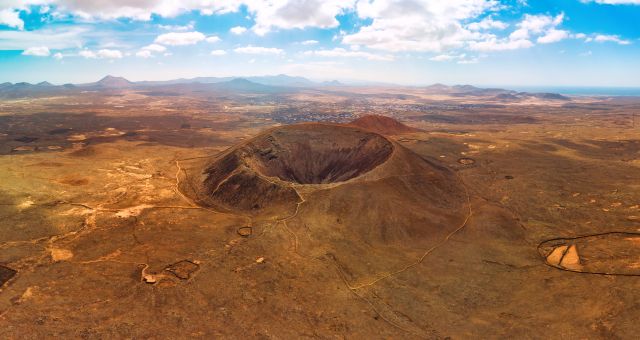 View of the impressive Calderón Hondo volcano in Fuerteventura

Compared to other Canary Islands, such as Tenerife, Fuerteventura has a more low-key nightlife and chilled-out vibe. The best place for a night out is Corralejo, a popular tourist resort in the north of the island. There, you will find several bars where you can listen to live music, drink great cocktails and sing karaoke.

If you feel like dancing and partying, there are some nightclubs and discos that stay open until the early hours of the morning.

Puerto del Rosario, Fuerteventura's capital, also has some great bars and clubs, most of which are located in the area around the port.

Characterized by the use of fresh local ingredients, Fuerteventura's cuisine is a fusion of various Mediterranean influences, mainly Spanish. Fish-based dishes feature prominently on restaurant menus.

During your holidays in Fuerteventura, we suggest that you try the following local dishes and products: 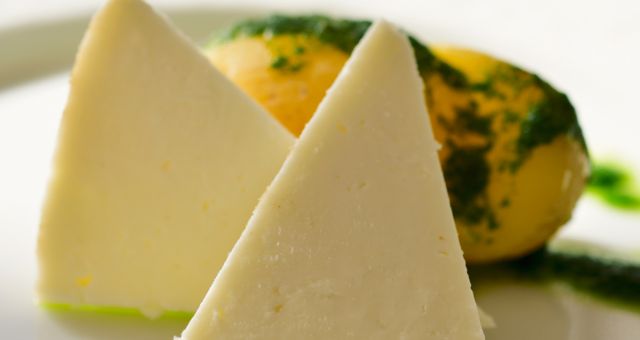 A slice of the delicious Majorero cheese, Fuerteventura's most famous traditional product

Towns and villages in Fuerteventura

The capital and biggest port in Fuerteventura is Puerto del Rosario. The city has some impressive street art and more than 100 statues made by local and international artists. Puerto del Rosario's waterfront promenade is also the perfect place for taking a walk or just enjoying great views of the sea.

If you prefer to get away from the crowds, Fuerteventura's charming villages are more peaceful and have some great restaurants and beaches as well as impressive natural sights and monuments.

Here are some of the best places to visit in Fuerteventura:

Tip: the artisan markets in La Oliva and Lajares are the perfect place to shop for local products, from traditional delicacies and fresh produce to spices and hand-made jewelry. 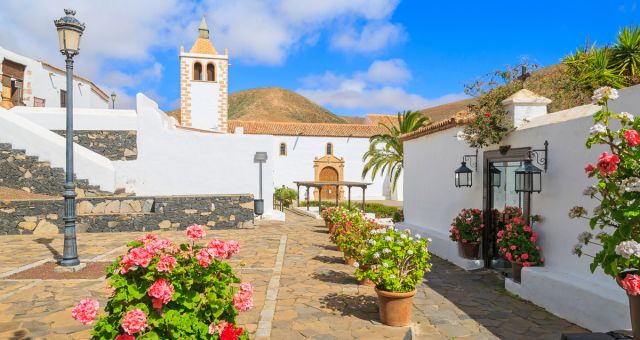 The beautiful church of Santa María in Betancuria, the old capital of Fuerteventura

Located close to the coast of North Africa, Fuerteventura is the second largest of the Canary Islands after Tenerife and offers all kinds of amenities for visitors.

Fuerteventura offers many accommodation options for different budgets. If you're wondering which is the best area to stay in Fuerteventura, some of the most popular resorts are Corralejo, Caleta de Fuste and Morro Jable.

Corralejo has the best nightlife on the island, while Caleta de Fuste is great for family holidays in Fuerteventura. Morro Jable is more peaceful than Corralejo and offers easy access to the stunning beaches of the Jandía peninsula and to the Jandía Natural Park.

The island's hospital is in Puerto del Rosario, the capital, and there are also medical centers in several towns and villages.

If you love the heat, the best months to visit Fuerteventura are July and August. Bear in mind, though, that the island gets quite busy during that time. Late spring or early summer is also a good time to travel to Fuerteventura, with peak temperatures in the mid-20s and minimal rainfall. March and April are warm as well, with temperatures around 22ºC during the day and 18ºC at night.

Important phone numbers for your stay in Fuerteventura

Here are some useful contacts to keep handy during your trip to Fuerteventura: 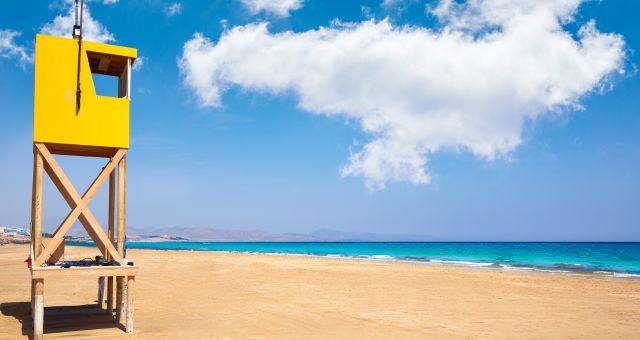 The gorgeous Sotavento beach in Fuerteventura

Fuerteventura is the longest of the Canary Islands, so distances can sometimes be bigger than you would expect.

The island has an extensive public bus network, but smaller towns and villages are connected by infrequent services. Fares can quickly add up for longer-distance connections.

You should also bear in mind that the airport is not well-connected to all areas of the island. If there is no direct bus route between the airport and your destination, you will have to change buses at Puerto del Rosario. For more information on bus routes and timetables, you can visit the official Fuerteventura transport service website.

You can also get around Fuerteventura by taxi, but keep in mind that the fare can be quite expensive for long-distance rides. Alternatively, you can hire a car to explore the island at your leisure and get the chance to visit beaches and villages that are not easily accessible without a vehicle.

Puerto del Rosario, in the east of the island, is the main port and capital of Fuerteventura. Close to the harbor you’ll find a supermarket, shops and a wide range of hotels to choose from.

Corralejo is located in the north, just a 5 minute walk from Corralejo. From here, you can easily sail away to Lanzarote or the wild Isle of Lobos. Finally, Morro Jable, on the south coast, is the closest to the neighboring island of Gran Canaria. Close to the harbor you’ll find a number of cafés. Corralejo and Morro Jable are located 31km and 89km respectively from Puerto del Rosario. 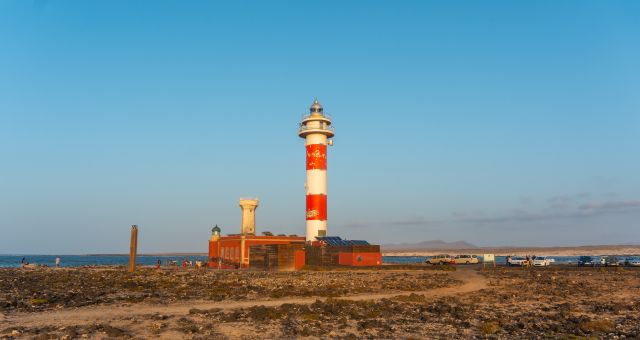 The Tostón lighthouse on the northwestern coast of Fuerteventura

From Fuerteventura, you can easily travel by ferry to Lanzarote, Gran Canaria and Tenerife.

Here's some additional information about them:

Tip: on Ferryhopper's Map of ferries, you can see all the available ferry routes from Fuerteventura, so that you can easily organize your island hopping in the Canary Islands.

More specifically, the available ferry connections to Fuerteventura are:

Where to book ferry tickets online to Fuerteventura

Book ferry tickets to Fuerteventura online on Ferryhopper at no extra cost. Compare trip duration, companies and ticket prices, and organize your trip to Fuerteventura and the Canary Islands with just a few clicks!