Cherbourg is a maritime town in northern France and one of the most important ports in the country. Closely linked to French naval history, Cherbourg boasts of its natural beauty, significant location in the Cotentin peninsula, amazing sights, and artificial harbor.

On Ferryhopper, you can find all the information you need for your holiday in Cherbourg. Discover the best things to do and how to get there. Check all available routes and book ferry tickets to Cherbourg from the UK and the Republic of Ireland at no extra cost!

Traditional architecture at the historic center of Cherbourg

At the northern tip of the Cotentin peninsula in the Manche department of Normandy, Cherbourg is mostly known as a French port town welcoming cross-channel ferries (English Channel). However, the charming Cherbourg, nowadays part of the larger Cherbourg-en-Cotentin city, is a hidden gem with a rich history and a cultural scene that is really worth exploring!

The setting of Jacques Demy’s famous “The Umbrellas of Cherbourg” musical film, Cherbourg captivates travelers with its incredible harbor, architecture, and medieval vibe. And if you are a nature enthusiast, you should definitely explore the Cotentin peninsula, blessed with diverse landscapes, from meadows to marshes and wild coasts.

How to get to Cherbourg

You can catch a ferry to northern France and Cherbourg from Poole and Portsmouth in the UK, and Dublin and Rosslare in the Republic of Ireland. Ferries to the port of Cherbourg cross the English Channel all year round. Check all info about ferry routes and schedules to Cherbourg below.

You can also reach Cherbourg by train. The Paris - Cherbourg railway line connects the French capital (Saint-Lazare train station) with Cherbourg via the city of Caen. As air travel to Cherbourg, there used to be flights from Paris to the Cherbourg – Maupertus Airport, but the connection is no longer active.

What to do in Cherbourg

Cherbourg, in Normandy, is a port town with a unique seafaring history that is worth exploring. In the city museums, you will find out how Cherbourg was connected to the Titanic (Cité de la Mer “Titanic exhibition), and you will learn about its naval past and significant harbor whose construction took over 70 years starting in the 18th century.

Apart from its special cultural interest, Cherbourg and the Cotentin peninsula are blessed with breathtaking natural landscapes, perfect for outdoor activities. You will be captivated by the imposing cliffs rising between the sandy beaches of the peninsula coastline, such as the ones in the moorland scenery of Cap de la Hague. The Cotentin countryside is also magical, so don’t miss a visit to the Saire valley.

The culinary scene of Cherbourg is great and honors traditional Normandy gastronomy, so prepare for awesome restaurants and food markets. 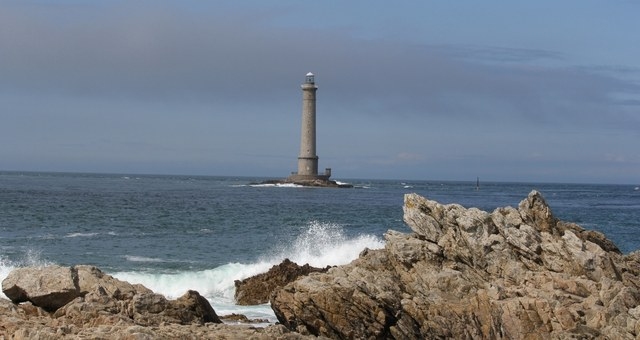 The magnificent lighthouse and scenery of Cap de la Hague

Sightseeing and activities in Cherbourg

The beautiful city has an important and, in some aspects, tragic past: Cherbourg is one of the first places that the Titanic visited on its fateful journey and it was occupied by the Nazis during the Normandy Landings, but was quickly liberated. The town’s rich history can be traced in its many museums and monuments. Its artificial harbor, the second largest in the world, is living proof of Cherbourg’s history as a defense naval base against the English.

Some the best things to see in Cherbourg are:

If you love nature, the Cotentin peninsula is a place of indescribable beauty, with an enormous variety of landscapes that you have to explore: marshes, meadows, hedged farmland, moors, cliffs and wild coasts. The Écalgrain bay, the Carteret cape and the Veys bay will take your breath away. To get the most of your Cotentin adventure we recommend following its coastal paths.

Should you have an appetite for shopping, the shopping center Les Eléis is your best option (and an impressive building as well). If, on the other hand, you feel like taking day trips to discover more of Normandy, we suggest visiting the amazing Honfleur, and the stunning island and abbey of Mont-Saint-Michel.

The majestic Basilica of the Holy Trinity in Cherbourg

Cherbourg is one of the largest cities in Normandy and an extremely lively place. In the narrow streets of the city center, close to the city marina, bars and pubs are numerous. There are many places offering craft beers and cheese-and-charcuterie bites, cocktail bars, cafés with a terrace, as well as several dance clubs! Some of the local favorites are Ô TapaSoiF, Kilbeggan’s Irish Pub, Le Solier, and Le Bayou.

In the summer months, the amazing La Plage Verte (‘the Green Beach’) also comes alive with many concerts and festivals.

Cherbourg has many good restaurants and is one of the best places to try the flavors of Normandy, a region that stands out for its apples, cider, mussels, rich butters and cheeses. The local specialty is salmon, raised in the sea waters around Cherbourg, and seafood is generally a big thing in the city.

Some of the best dishes and delicacies to try in Cherbourg are:

To find the best local delicacies, don’t forget to visit the Cherbourg markets, such as the fresh fish market at La Vieille Ville and the grand markets in Place de Gaulle, where you can find fresh produce, delicatessens and flower stalls. 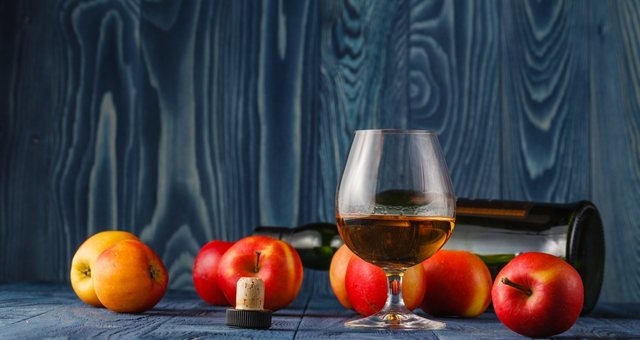 A glass of tasty Calvados apple liqueur from Normandy

Cherbourg is the fourth largest city in Normandy and has around 80,000 inhabitants. Although it serves many ferry and cruise-ship connections, as well as major yacht races, the port city is not touristy at all. On the contrary, it has an authentic local lifestyle and a vibrant cultural life that serves its history right. The city is very developed, so, naturally, travelers can enjoy all necessary amenities during their trip, including a public hospital.

As for accommodation, options are plenty, whether you travel with family, friends, or as a couple. If you prefer to stay inside Cherbourg, there are many hotels and apartments to choose from depending on your vacation style and budget. Most places are located in the city center close to the city marina.

If you want to explore the Cotentin peninsula and spend time at the seaside or in the countryside, there is a large selection of hotels, campsites, guesthouses, self-catering rentals, youth hostels, etc. And if you feel like picking something more unusual, you may even find viking tents, a gypsy caravan or a cabin.

Important phone numbers for your stay in Cherbourg

Here are some useful contacts for your trip to Cherbourg:

Cherbourg has a decent bus network that runs across town. The truth is however, that you can easily get around the city and reach everything on foot, as the large majority of the sights are within walking distance from one another. This is also the best way to discover its hidden gems and neighborhoods, such as the small medieval streets, stunning square, and traditional stone houses. A long stroll at the Chantereyne marina is also a must.

If you wish to get around the Cotentin peninsula and move at your own pace, it’s best to bring or hire a car. Cycling around Cherbourg and the peninsula is also very popular, especially in the summer, and there are excellent bike routes that you can follow. Otherwise, there are taxi services that you can use.

Cherbourg is an important commercial, ferry and military port on the English Channel. Located at the northern end of the Cotentin Peninsula and covering a surface of 1,500 hectares, it is the second largest artificial harbor in the world. The port construction began at the end of the 18th and, ever since, three forts and two breakwaters were added. The port has played a crucial role in France’s naval history.

Nowadays, the port serves cross-Channel passenger and cargo flows from and to the UK and the Republic of Ireland, and works as a cruise-ship arrival point. Large ferries and fast catamarans arrive there daily. Passengers can also travel by ferry from the Chergbourg port with their car or trailer.

Cherbourg is also one of the most famous venues for competitive sailing, hosting more than 50 events in the last 20 years. The port’s great Chantereyne marina has a capacity of more than 1,100 berths and offers a wide range of superb marine services. 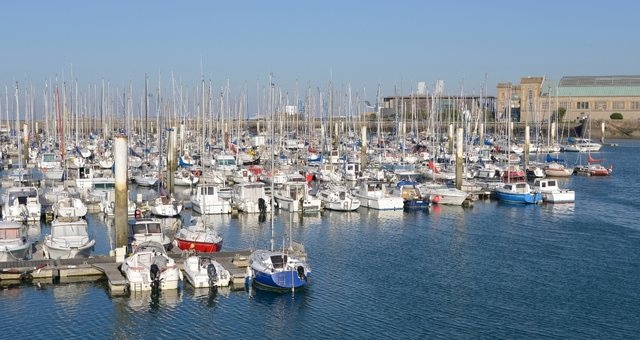 Countless boats and yachts at the port of Cherbourg

There are ferry connections to the port of Cherbourg from the ports of Portsmouth and Poole in southern England, UK, as well as from Dublin and Rosslare in the Republic of Ireland.

Here are more details on the ferry routes to Cherbourg:

On Ferryhopper's Map of ferries, you can see all available ferry routes from/to the port of Cherbourg, so you can easily plan and visualize your ferry trip.

Tip: as ferry schedules are subject to change, we recommend checking the latest ferry information on Ferryhopper. 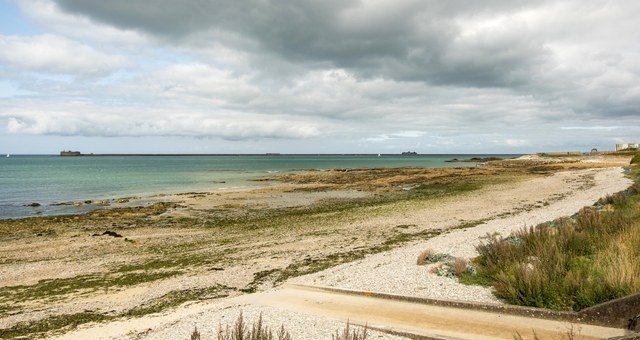 The wild coast of Cherbourg on a cloudy day

Where to book ferry tickets to Cherbourg online

On Ferryhopper, of course! Check all ferry routes to and from the port of Cherbourg in northern Germany, compare prices, timetables and companies, and book ferry tickets to Cherbourg online at the same prices as ferry companies.