Antikythera is a small island ideal for complete relaxation in your vacation. Located in the south of the Peloponnese, the island has beautiful beaches and impressive landscapes. On this page, you can find useful information about holidays in Antikythera, activities, accommodation and ferry schedules. Book cheap ferry tickets online at Ferryhopper with just 4 clicks! 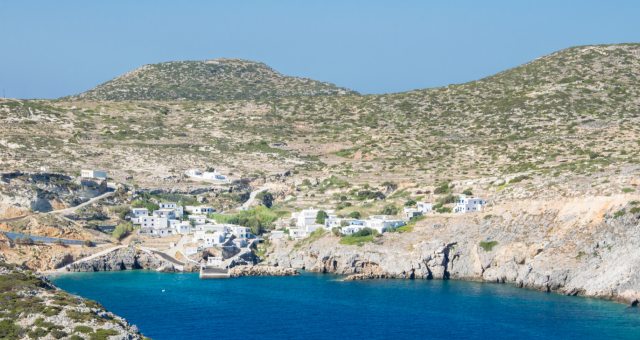 Ferry arriving at the port of Potamos in Antikythera

Antikythera or Tsirigoto is located south of the Peloponnese, in the passage between Kythira and Crete. The main village and port is Potamos.

The island has about 40 permanent residents and it has maintained its authentic character throughout the years.

The peaceful vibes of Antikythera are everything you need if you want to enjoy quiet moments in nature and recharge your batteries away from the crowds, on a low budget.

The island is world-famous for the Antikythera mechanism, a complex ancient instrument for astronomical observations, which was found in a shipwreck off the island coast.

How to get to Antikythera

You can easily get to Antikythera by ferry from the neighboring island of Kythira, or from the port of Kissamos in Crete.

There are also regular ferry crossings to Antikythera from the port of Piraeus and the ports of the south Peloponnese (Gythio or Neapolis).

What to do in Antikythera

In Antikythera, you can enjoy the simplicity of the island life, eat good food and swim in crystal clear waters.

The island has several monuments and sights of historical interest and it's also great for hiking.

The accessible beaches of Antikythera are only a few but they have impressive waters for swimming and snorkeling.

The landscape of Antikythera has many steep wild rocks so the island has few accessible beaches, which, however, will impress you with their pristine beauty.

You can swim in

The beach of Kamarela is about 30 minutes walk from the village of Potamos and is consider one of the most impressive parts of the island, with turquoise crystal clear waters and steep cliffs that rise into the sea. Do not forget your mask! 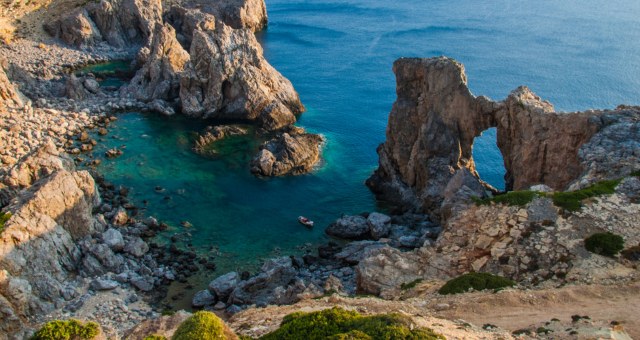 The impressive bay of Kamarela on the island's east coast

Sightseeing and activities in Antikythera

Antikythera is a quiet island that offers opportunities for activities and exploration. Discover the sights and natural beauties of Antikythera by walking, and get to know the history of the place. 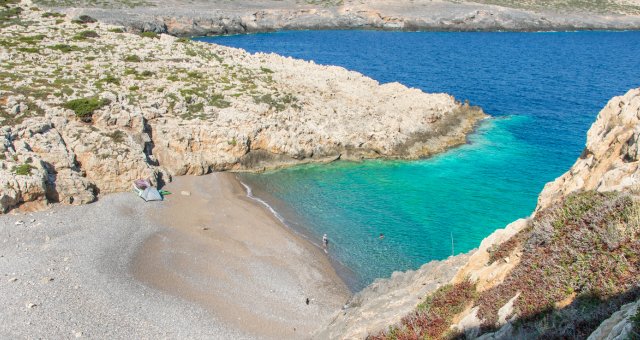 The wild beauty of Xiropotamos beach

On the island, there are 2 tavernas that serve traditional delicacies and fresh fish.

A traditional dish of Antikythera is the wild goat, which is delicious and you should definitely try if you are a meat eater!

The largest village on the island is Potamos, where most of the residents live.

The second-largest village is Galaniana, on the mainland, where you can find the church of Agios Myronas.

Antikythera has limited tourist infrastructures, as the locals maintain a more traditional way of life. In the port of Potamos, you will find the only shops on the island: a mini market, a kafeneio, and 2 tavernas. There is no bank or ATM.

The locals are hospitable to campers, as long as they respect the environment and the residents.

Important phone numbers for your stay in Antikythera

Some useful numbers for your holidays in Antikythera:

Since the size of the island is just 20 square meters, you can go to most places on foot. 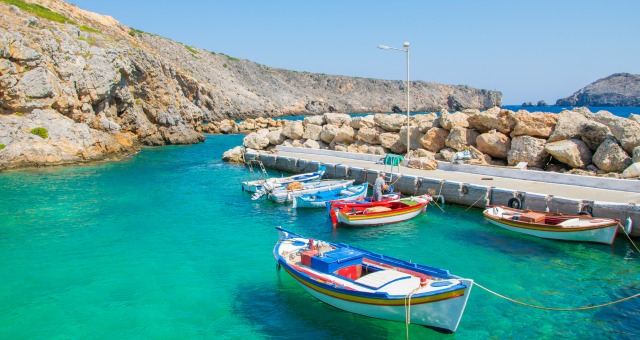 Fishing boats and the ferry platform at the port of Potamos

From Antikythera, you can easily travel by ferry to Kythira as well as Crete.

The available ferry connections from Antikythera are:

You can find all the available ferry schedules and routes from Antikythera on our Map of ferries.

Here are some more specific information about the ferry routes: 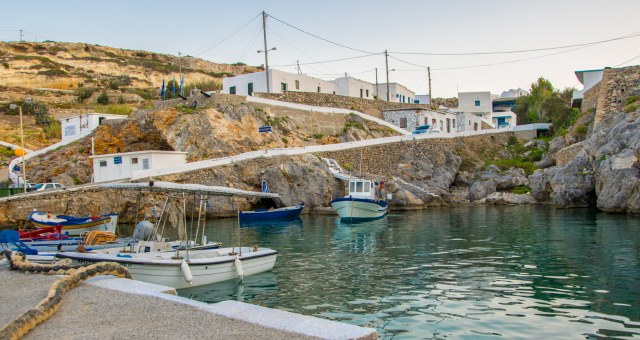 Beautiful sunset at the port of Antikythera

Where to book ferry tickets online to Antikythera

On Ferryhopper you can book your ferry ticket to Antikythera online with just 4 clicks! Compare all schedules, companies, types of ferry and prices and book your ferry trip at no extra cost.