Guide to the ports of the Canary Islands

Pick the right one for you!

Among the 8 islands of the Canary archipelago, there are a total of 16 ports from which you can take a ferry to start your trip. La Palma, El Hierro and La Graciosa have only one port, but the other islands have 2 and even 3 ports. Are you wondering which port suits your travel plans best?

Keep on reading to find out all about the Canary Islands ports and get the best travel tips so that you can choose the one that best suits your needs. 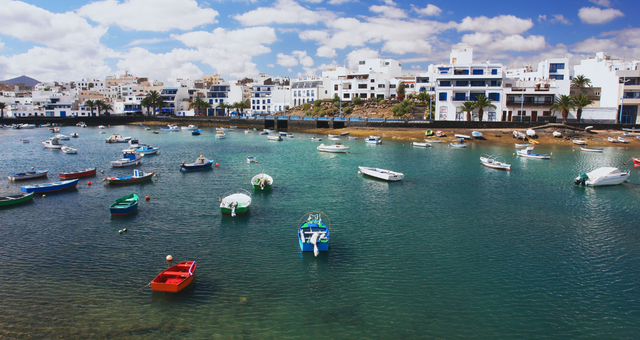 The town of Arrecife in Lanzarote

Which port should I choose in Lanzarote?

Lanzarote has 3 ports, Órzola in the north, Arrecife, located in the heart of the island and Playa Blanca in the south. Órzola is the only port in the archipelago that connects with La Graciosa. As there is no airport, taking a ferry from there is the only way to reach this magical island.

However, if you want to travel from Lanzarote to Las Palmas or Cadiz directly, the port of choice will be Arrecife. Depending on the season, there is also a connection with Puerto del Rosario in Fuerteventura.

The port of Playa Blanca is ideal if you want to visit the neighboring island as the ferry only takes 25 minutes. Enjoy your holidays in Lanzarote to the fullest by going on a day trip to Fuerteventura!

Which port is best for me in Fuerteventura?

Fuerteventura also has 3 ports, Corralejo in the north, Puerto del Rosario in the center of the island and Morro Jable in the south. The port of Corralejo connects with Lanzarote in only 25 minutes by ferry, so it’s perfect if you are planning to go on a day trip or a getaway.

Puerto del Rosario connects with Gran Canaria year round and, in high season, with Arrecife in Lanzarote. The crossing to Las Palmas is long so if you are short on time it is advisable to choose the port of Morro Jable. However the route from Puerto del Rosario is usually cheaper.

The port of Morro Jable has connections to both Las Palmas de Gran Canaria and Santa Cruz de Tenerife. If you travel to Las Palmas, you should keep in mind that, although tickets from this port tend to be a little more expensive, the crossing only takes 2 hours in fast ferries, so this option will save you a great deal of time. 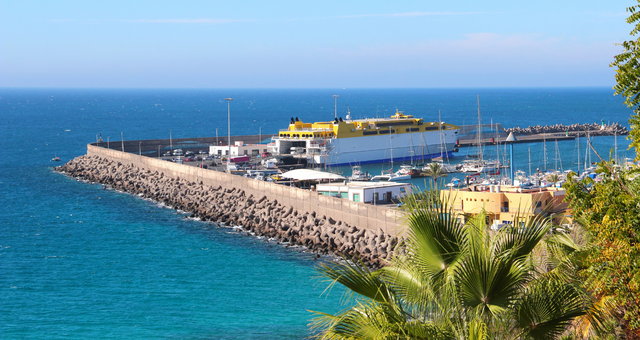 A ferry docked at the port of Morro Jable in Fuerteventura

How many ports does Gran Canaria have?

Gran Canaria has 2 ports, Las Palmas de Gran Canaria in the northeast and Agaete in the northwest. The latter is perfect if you are traveling to Tenerife as it connects the two islands in just 80 minutes. If you are in Las Palmas, the drive to Agaete won’t take you more than 40 minutes and if you don't have a vehicle, you can easily catch a free shuttle bus to the port.

The large port of Las Palmas connects with 6 destinations: Huelva, Cadiz, Santa Cruz de Tenerife, Arrecife, Morro Jable and Puerto del Rosario. If you travel to Fuerteventura, we advise you to choose Morro Jable as the crossing is shorter. Ferries departing from this port take around 20 minutes longer to arrive at Tenerife than those that leave from Agaete.

Good to know: while Fred. Olsen Express operates in both ports of the island, Naviera Armas only operates in the port of Las Palmas.

Which port should I choose in Tenerife?

The port of Santa Cruz de Tenerife has 6 direct connections to Huelva, Lanzarote, Las Palmas, Agaete, Morro Jable and Santa Cruz de la Palma. The crossing to Las Palmas from this port is a little longer than the one to Agaete, but if you stay in the capital it may be more convenient to travel directly there.

Good to know: both Fred. Olsen Express and Naviera Armas operate in the 2 ports of the island. 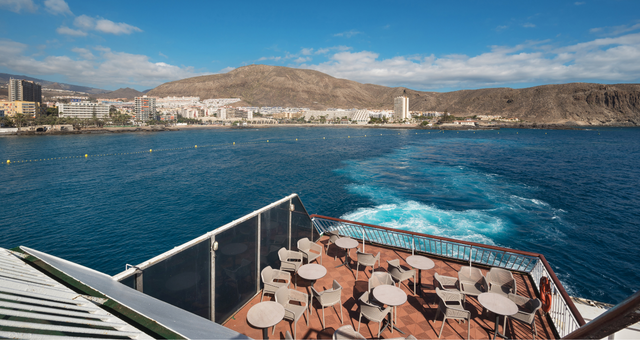 Port of Los Cristianos seen from the deck of a ferry

What ports are there in La Gomera?

Despite being a small island, La Gomera has 3 ports, San Sebastian, Playa Santiago and Valle Gran Rey. The last two only have internal connections with the other ports of the island. So you can explore La Gomera by ferry.

The port of San Sebastian has connections with the other ports of the island, as well as with Los Cristianos and Santa Cruz de La Palma.

Good to know: Fred. Olsen Express operates in all the ports of the island and Naviera Armas in the port of San Sebastian.

Where to book ferry tickets to the Canary Islands online?

Ferryhopper makes it easy for you to book ferry tickets between the Canary Islands at the best price. Check out our Map of ferries, and compare all the available companies, routes and schedules to plan your trip now.