If you are in Athens, the sun is burning and in the back of your head plays The Clash “Should I Stay or Should I Go?” then the answer is simple! It’s 6 letters long and just 1 hour from the port of Piraeus! Aegina is the perfect getaway because it combines history, art, instagrammable corners and it’s ideal for a day trip or a weekend escape! 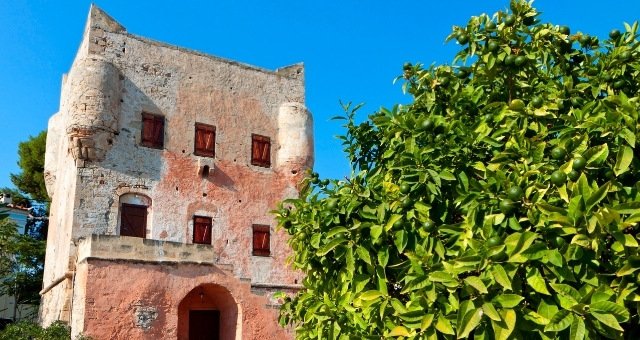 The impressive Venetian Tower of Marcellus

A day trip to the peanut island

You’ve got a day in Aegina and now you wonder where to start! Should you visit the Tower of Marcellus, the pink watchtower located near the port or should you first try the most delicious peanut praline in the world (yes, we tried it and yes, it’s the best).

There’s a lot to see but don’t worry! In just 20 minutes, you will be crossing the threshold of Kostas Varotsos’ Aegina Gate, made of iron and glass. A few steps ahead, you will greet the imposing copper statue of The Mother sculptured by Christos Kapralos and you will see the house of Nikos Kazantzakis.

On your way back to the center, you will see the imposing Temple of Apollo that testifies to the grandeur of Aegina since ancient times. When you reach the port, make a pit stop at the colorful floating markets for fresh fruits and peppery spices. 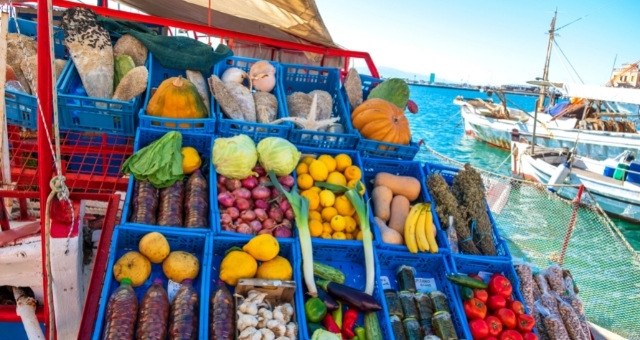 Colorful floating markets at the port of Aegina

The perfect weekend escape in Aegina

Do you think a day isn’t enough to explore the island properly? Then, board your car on the ferry from Piraeus and get ready for an epic weekend in Aegina. Of course, most people go for a stroll parallel to the port and fresh fish near the coast. That is all great but Aegina has so much more to offer!

The beautiful island takes you by the hand to lead you to its distant, however, glorious past! Did you know that here you will find the Temple of Aphaia, which inspired the architecture of the Parthenon? Take a deep breath, feel the breeze and enjoy a 360° view of the Saronic Gulf, the Poseidon Temple AND the Acropolis!

The stunning Temple of Aphaia in Aegina

Since we are talking about breathtaking landscapes, your next stop is a place carved by nature! The Ancient Olive Grove (Eleonas) is only a 15-minute ride from the port. A walk on the most mystical path of Aegina surrounded by centuries-old olive trees will reveal to you the authentic Aegina, the soul of the island!

After taking a dose of ancient times, off we go to the Middle Ages! Well, you haven’t probably seen such enthusiasm for the Middle Ages before and we don’t blame you. However, Paleochora, the medieval village is an integral part of the island as it was Aegina’s capital until 1826.

Tip: only 38 out of 166 medieval churches of Paleochora survived in time to uncover the secrets of another era.

After such a long journey to the past, our stomachs are growling! The picturesque village of Perdika is known for its tavernes! Is there anything better than fresh seafood by the sea?

Nope! So, pack your bags for a fantastic weekend in Aegina! With Saronic Ferries and Blue Star Ferries, you will be on the island in less than 1 hour, with tickets starting at €7! Book your ferry tickets with Ferryhopper and…rendezvous in the floating markets!