At the sunkissed heart of the Aegean Sea, right next to Mykonos, lies the small Cycladic island of Delos. Delos was known as one of the most significant places of worship in Ancient Greece. Today, it is a uniquely beautiful and easily accessible archaeological site.

On this page, you will find all the necessary information about your visit, the history of the island, ferry tickets, and schedules for Delos. 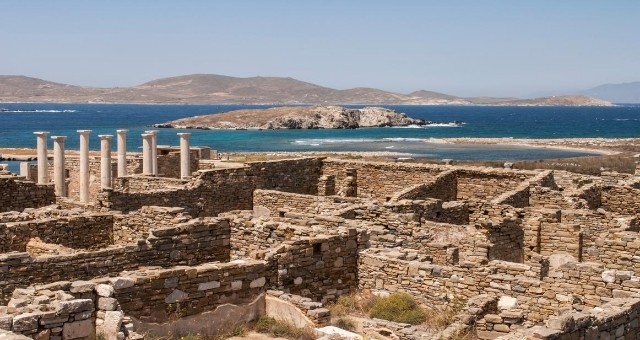 Delos, an open-air museum in the middle of the Aegean Sea

Although Delos is one of the smallest islands on the Aegean, its rich and unique history makes up for it. What used to be a sacred place of utmost significance in ancient times is today one of the most important archaeological sites in Greece. In fact, Delos is a UNESCO World Heritage Site because of the remarkable findings that were discovered on the island.

Visiting Delos feels like wandering through an open-air museum. Excavations have brought to light a large settlement that dates back to the Hellenistic and Roman times.

The settlement is in an exceptional state, offering visitors a unique glimpse into the daily and private lives of the inhabitants of an ancient city. A walk on its paved streets, among its houses, temples, and statues is enough to take you back to ancient times.

How to get to Delos

As the island does not have an airport, you can only travel to Delos by ferry. There are no direct ferry crossings between mainland Greece and Delos. Instead, you can access Delos through Mykonos, its closest island. During the summer months, ferry routes from other nearby islands (Naxos, Paros, Tinos, Syros) are also available, making day trips to Delos easier to plan.

You can find more information on ferry crossings, schedules, and ticket prices in the relevant section. 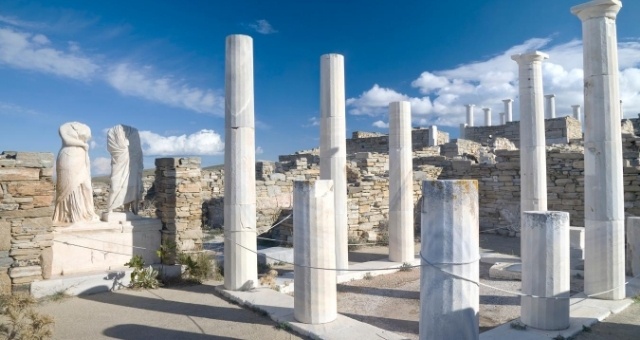 The House of Cleopatra and Dioscorides, with their beautiful statues

What to do in Delos

Visiting Delos is ideal for one-day trips filled with impressive sightseeing. The island has many ancient monuments for you to explore, making it an exceptional destination for lovers of history and mythology. Discover all that Delos has to offer below!

Delos' rich past is evident in every corner of the island. During your visit, you will have the chance to explore one of the most important sanctuaries of Greek antiquity and discover a large Greco-Roman city. Dive into the past and let the history of the island unfold!

Some of the most impressive landmarks in Delos are:

Tip: it’s worth going to the top of Mount Cynthus, the tallest hill in Delos (112m). Το reach the top, you can take the ancient stairs, an ascent that takes about 20 minutes. The view of the island, the sparkling Aegean Sea, and the surrounding Cyclades are breathtaking. 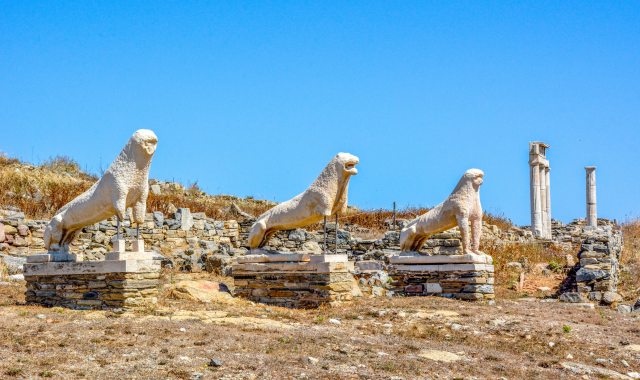 The famous Terrace of the Lions, one of the most remarkable landmarks of Delos

Tips for sightseeing in Delos

Here are some tips for your visit:

The mythology and history of Delos

To learn more about the monuments and landmarks of Delos, you can read about the island's mythology and history here!

According to Greek mythology, Delos was the birthplace of Apollo and his twin sister, Artemis. Because of that, the island was considered sacred in ancient times. The surrounding islands joined in a circular dance around Delos, and thus the name “Cyclades” came to be.

Delos was first inhabited in the 3rd Millenium BCE, and during the late 15th century BCE, Mycenaeans settled on the island.

The worship of Apollo had already been established during the Homeric Age and reached its peak in the archaic and classical eras. At the time, the city that ruled the island of Delos politically and culturally was Athens, the founder of the so-called Delian League. This was an association of Greek city-states that had Delos as its base.

During the Hellenistic and Roman periods, Delos emerged as one of the largest and richest commercial ports in the Aegean. This led to an increase in population and construction activity on the island. The city that was brought to light by the archaeological excavations and that travelers can visit today dates back to those glorious days.

In the 1st century BCE, however, Delos was attacked and looted twice. After that, the island started to decline until it was eventually abandoned.

Delos is a protected archaeological site with important findings on every corner. Because of that, swimming is not permitted on the island.

Is going for a swim on your to-do list? Keep reading to learn about our island-hopping recommendations and enjoy beautiful Cycladic beaches elsewhere.

Since the whole island of Delos is an archaeological site, camping and overnight stays are prohibited. The same applies to staying on the island outside of the site’s opening hours.

In Delos, you will find ticket offices, facilities for people with disabilities, and public restrooms. In terms of services, there are guided tours available. In the summer, the archaeological site is open from 8:00 to 20:00 daily. The ticket fee is €8 (full price) or €4 (discount) and includes access to the Archaeological Museum of Delos.

It is important to note that certain groups of visitors are entitled to free access to the archaeological site (for instance, children and adults under the age of 25 that come from member states of the European Union, and holders of a Greek unemployment card).

Make sure that you carry all the necessary documents with you to prove that you are eligible for the discount. These prices do not include ferry tickets from neighboring islands.

Note: the Archaeological Museum of Delos will remain closed throughout the summer of 2022. However, you can visit the archaeological site that is open to the public.

Some useful phone numbers for your visit to Delos:

Reminder: the archaeological site and museum are easily accessible to people with disabilities, as they are equipped with ramps and disabled-friendly toilets.

Delos has one small ferry port. It is located close to the ruins of the island’s two ancient ports, the Sacred Port and the Commercial Port. 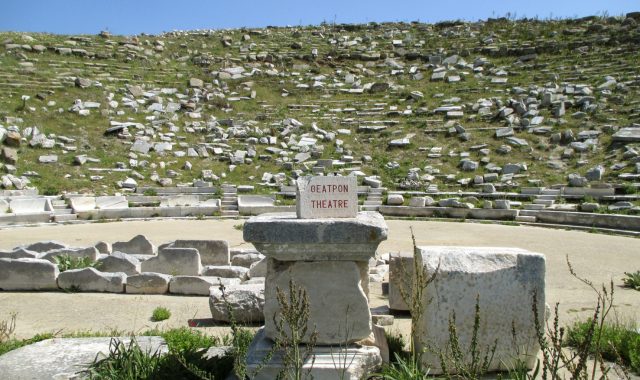 A close look at the Ancient Theatre of Delos

Although you can't go island hopping from Delos, you can visit the sacred island as part of your tour in the Cyclades!

As Delos is located at the center of the archipelago, you can easily reach it from Mykonos, plus Naxos, Paros, Tinos, and Syros. Check our Map of ferries to find all available crossings between these islands and continue reading to learn more about your trip to Delos.

You can travel to Delos mainly from Mykonos, its closest neighboring island. Read everything you need to know about the ferry trip from Mykonos to Delos below.

Mykonos - Delos ferry crossing: local operators provide ferry routes from Mykonos to Delos. Boats depart from the old port of Mykonos, located in Chora. In the summer, there are daily ferry crossings to Delos, taking approximately 30 minutes. Return tickets cost €22 for adults, with discount tickets available for children. You can buy ferry tickets from the ticket offices in Chora, Mykonos.

Tip: ferry tickets do not include access to the archaeological site.

Wondering how to get to Mykonos? Check all the possible ways to travel to Mykonos!

During the summer, there are ferry services to Delos from Naxos, Paros, Tinos, and Syros. The routes are operated by local companies. Ferry tickets can be purchased on the island you are departing from.

Plan your trip to Delos

Eager to explore the sacred island of Delos? On Ferryhopper, you can find all the necessary information about your visit, the archaeological site, the history of the island, and the available ferry schedules. Plan your itinerary with our useful tips, explore island-hopping routes in the Cyclades and enjoy your trip to Delos hassle-free!