Calais is a noteworthy harbor of the European continent. Situated in northern France along the English Channel, Calais is known for its scenic cliffs and for its wide area of dunes. As a holiday destination, it remains unknown to many travelers, but we’re here to guide you through all the hidden gems of Calais!

On Ferryhopper, you can find detailed information about must-see places in Calais, the best beaches, local delicacies, and ferries to and from its port. Read our travel tips and book ferry tickets to Calais with ease!

Below, you can discover: 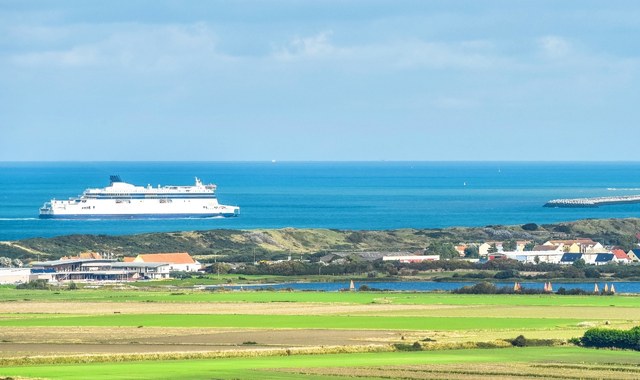 Ferry arriving at the port of Calais

With over 10 million passengers passing through the port each year, Calais is France's number one passenger and car ferry port. The Port of Calais accommodates everything, including cross-Channel ferries, cargo and cruise ships.

At the port you will find several visitor amenities, such as a bar and self-service restaurant, car hire companies, a tourist information desk, parking facilities, and even a children’s area with arcade games.

The majority of the ferry routes from Calais are operated by large ferries that have a garage for the transfer of vehicles.

We have collected here some useful information about Calais - Dover ferries in order to plan your trip in the best possible way:

Ferry from Calais to Dover

The ferry route from Calais to the coastal town of Dover runs up to 25 times a day throughout the year. The duration of the Calais - Dover ferry route is approximately 1.5 to 2.5 hours.

The ferry companies that normally serve this route are DFDS, P&O Ferries and Irish Ferries.

Where is the ferry port in Calais?

The ferry port of Calais is located on the northern tip of France, in the department Pas de Calais, and faces across the Channel toward Dover.

How to get to Calais port?

The ferry terminal is easily accessible by car, bus, train, and on foot.

If you’re traveling by car, the port is linked to the French road network by 2 autoroutes, the A26/E15 and the A16/E40. The port and ferry terminal are well signposted from all directions. In front of the ferry terminal there’s also short-term parking.

If you’re traveling by bus, then you can take the free bus shuttle service, the Balad'In, which operates between the Port of Calais, the town center and the Calais-Ville railway station. Finally, the closest train station to the port is Calais Ville. The terminal is less than 20 minutes’ walk from the station.

Useful info: the port of Calais does not currently have parking spaces for medium and long term parking.​ 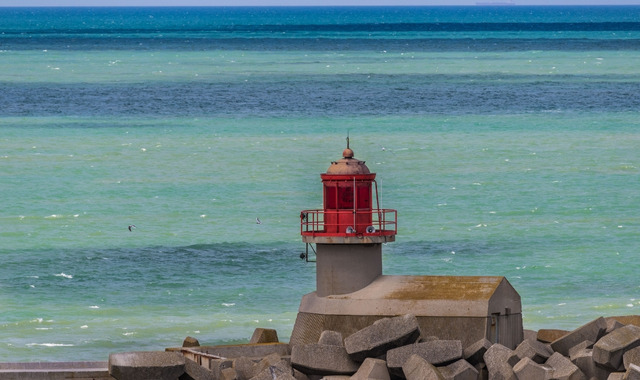 A red lighthouse at the port of Calais

Calais is a charming port city perfect for a historical city break. It's a fantastic weekend getaway, ideal for stocking up on wine and cheese, and experiencing ocean views and fine cuisine on the French coastline.

Calais is also an ideal place for those who enjoy an active vacation, since there are many beautiful trails around the area. Its long expanse of wide sandy beach is absolutely safe for swimming for children and adults alike.

Finally, its variety of museums and attractions will convince you that Calais is much more than just a port.

How to get to Calais

You can reach Calais by car, train, plane, and ferry.

If you want to travel by car from the UK to mainland Europe, you can do so through the Channel Tunnel, which runs 24 hours between Folkestone and Coquelles (West of Calais).

Rail travel to Calais is also quite convenient. There are 2 railway stations in Calais: Calais-ville, an important station on the Nord Pas de Calais regional network, and Calais Fréthun International, served by TGV and Eurostar high-speed trains.

If you wish to get there by plane, the closest international airports are Lille-Lesquin (120 km) or Brussels-Zaventem (210 km).

Calais can also be directly reached by ferry from the port of Dover. Ferry frequency and availability may vary depending on seasonality. 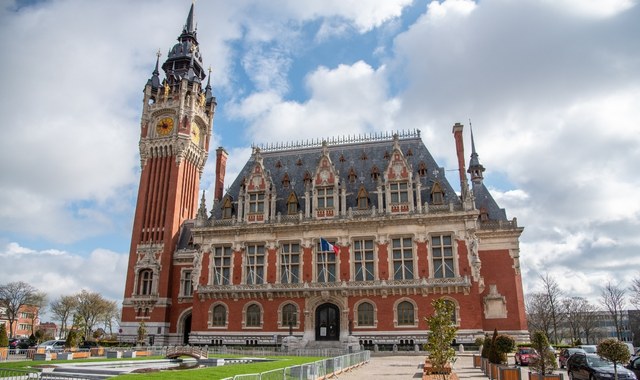 What to do in Calais

While Calais is often overlooked in the rush to board a cross channel ferry, it is definitely worth a visit. Take a stroll through the town center. The distinctive Hotel de Ville (town hall) and the famous statue of the "Six Burghers of Calais" will definitely grab your attention. Keep walking to see the Citadel's ancient walls and the Watchtower.

For the lovers of history - visit the church of Notre Dame and the Museum of Fine Arts. Also visit the World War II Museum at La Coupole, which is only a short drive from Calais.

No matter the time of year, going for a stroll or enjoying a sporting activity by the Calais seafront is a must! There’s even a huge playground, a mini golf course and an open-access skatepark for children. If you’re lucky, you might even spot the famous Calais Dragon which takes 48 passengers on a 45-minute journey.

If you have enough time, how does a road trip to the 134 m high Cap Blanc Nez sound to you? This is France’s most northerly cliff and it’s located just 10 km from Calais. This is also one of the most renowned birdwatching spots in Western Europe.

Tip: for an amazing 360° panoramic view of Calais and its hinterland, climb 271 steps up to the top of the Calais lighthouse.

Here are 6 beaches in Calais that you should visit: 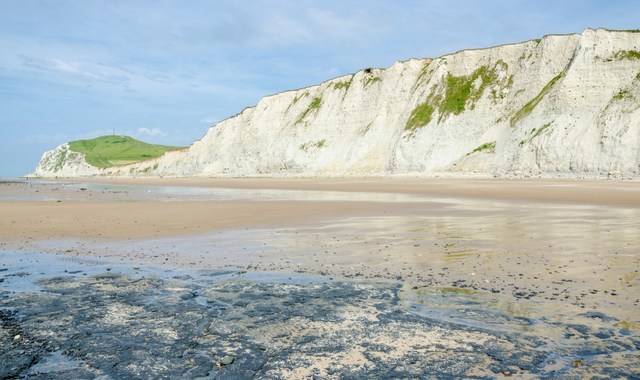 Despite the fact that it was destroyed during WWII, Calais managed to save some of its ancient remarkable monuments. Visitors can explore its streets and admire historical buildings, step inside themed museums, and unwind in lovely gardens.

Here you can find a list of the top sightseeing in Calais: 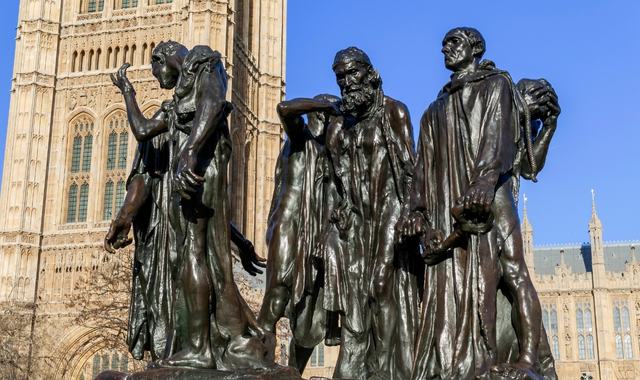 The bronze sculpture of the Burghers of Calais

The nightlife in Calais and in most of the towns around the region is on the quiet side.

The majority of the city's nightlife hot-spots are concentrated close to Place d'Armes, one of the largest city squares in Calais. Here you will find several pubs, clubs and discos.

In Calais you’ll even find a casino! Even if you’re not into gambling, it is worth a visit for a drink or two.

Calais is the ideal place to enjoy fine cuisine on the French coastline. Situated in the center of Europe, its cuisine is inspired by Belgium, England and Poland. Most of the traditional dishes in Calais consist of cheese, potatoes and herrings.

During your stay in Calais, make sure to try the following delicacies:

Tip: for dessert, make sure to visit the Artisan Boulanger on Rue Royale. It is famous for its local cake called Le Calais (with a macaroon pastry, coffee buttercream and almonds). Bon appetit! 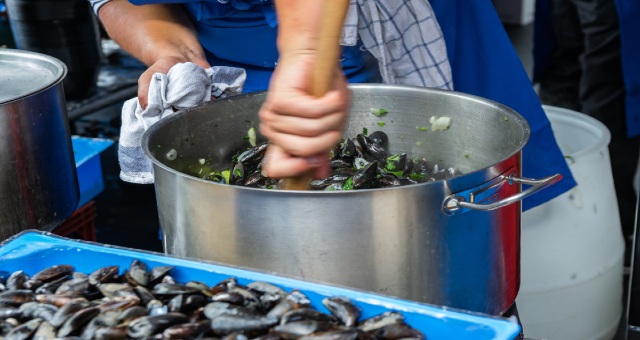 Here are some more useful Calais tips to help make your holidays even more enjoyable:

Calais is the largest city in Pas-de-Calais with a spectacularly rich history and sightseeing offering many tourist services.

In Calais, you will find a variety of accommodation options depending on your style and budget, such as hotels, b&b’s and even campsites. The Cote d'Opale is one of the best places to stay in Calais for families looking for a beach break. However, if you want to go sightseeing, we would recommend staying close to Place d'Armes.

As for hospitals, there are several options in the center of Calais and the suburbs, so you can enjoy your vacation with peace of mind.

Important phone numbers for your stay in Calais

Here are some useful contacts for your trip to Calais:

The Calais Opale Bus public transport network operates 13 routes in Calais and the neighboring towns. There’s also a free city center shuttle, Balad’in. These little yellow buses run from Monday to Saturday between the fishing port and Boulevard Lafayette. From Spring to Autumn you can also find Div’in, an open top double decker bus service which operates from outside the Theatre in Calais to the Cap Blanc Nez tourist site.

In Calais, there are 2 train stations. Calais-Fréthun is situated close to the Channel Tunnel and Calais-Ville is in the town. Both stations are linked by the Navette TER bus service.

For more flexibility, visitors can rent bicycles through Vél’in, a self-service bike hire system, with 38 stations located throughout the metropolitan area.

On Ferryhopper, you can book ferry tickets from Calais to Dover at the best price, without any hidden fees! Find all the information you need about ferry schedules on our Map of ferries and get ready for an amazing journey.