With its picturesque canal network, rich history and vibrant nightlife, Amsterdam is one of Europe’s most delightful cities that offers something for everyone.

On Ferryhopper, you can find the best vacation tips for the city of Amsterdam, what to do and see, favorite delicacies, and interesting activities. Gather inspiration for your trip, learn how to travel to Amsterdam by ferry and book your ferry tickets online! 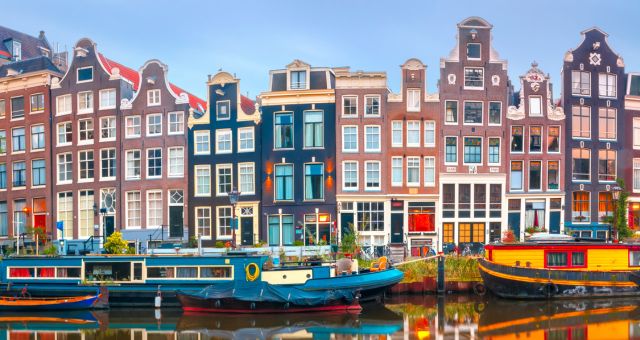 Amsterdam is a charming Dutch city known for its pretty canals, treasure-packed museums, bustling markets, exotic nightlife, tulip fields, and cheese. Its small-town vibe with all the major attractions within easy walking distance is one of its unique charms.

The capital of the Netherlands is great for a European city break at any time of the year. Whether you’re traveling with friends, family or are a solo traveler, Amsterdam is perfect for you if you’re in the lookout for cool cafés, vintage-filled shops and a buzzy gastronomy scene.

Even though the city is compact, you’ll need at least a couple of days to find and appreciate Amsterdam’s most fascinating, and often hidden gems.

How to get to Amsterdam

Amsterdam is very easy to reach by plane, train, bus, and of course, by ferry!

Let’s start with the most leisurely and scenic way to visit Amsterdam: traveling by ferry! The experience of catching a ferry from Newcastle, England to Amsterdam and crossing the North Sea is like no other. Discover more about ferries to Amsterdam below!

If you wish to arrive by plane, the award-winning Amsterdam Airport Schiphol is located about 20 km from Amsterdam and flies to 323 destinations. Taking the train to Amsterdam is another great option. The city has 9 train stations, but Amsterdam Central Station is the closest one to the center of the city.

Lastly, when it comes to bus services, you can travel from other locations in the Netherlands and abroad to Amsterdam Sloterdijk or Amsterdam Amstel.

What to do in Amsterdam

There's never a shortage of things to do in Amsterdam. Spend your mornings pedaling along the flowing canals on your bicycle and visiting iconic sites like the Anne Frank House, Rijksmuseum and Van Gogh Museum.

If you’d rather explore the city with zero physical effort, then go canal cruising. Even though a cliché, this is one of Amsterdam’s must-do activities and provides a stunning backdrop to the city’s historical center.

Check out Ijhallen, the largest flea market in Europe, if you’re in the hunt for secondhand treasures, or Albert Cuyp Market, if you’d rather bring the taste of your travels back home with you. Then chill out at a traditional Dutch local pub, known as a bruin (brown) café, for a taste of authentic Amsterdam flavor.

End your evening by catching a movie at Pathé Tuschinski, one of the most beautiful cinemas in the world, or drink the best beer at one of Amsterdam’s original microbreweries and go to beer heaven. 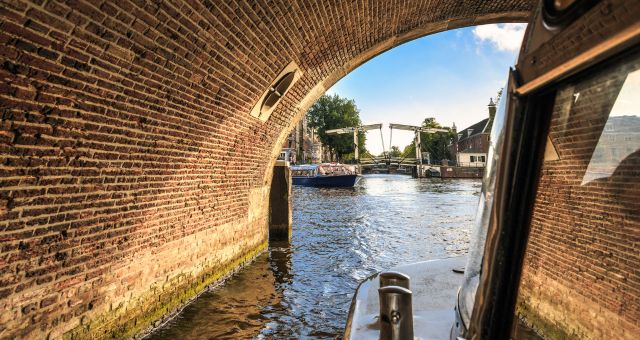 A boat passing through a tunnel in Amsterdam

Sightseeing and activities in Amsterdam

With more than 800 years of history to discover, the Dutch capital is rich with fascinating attractions and sights. No trip to the city is complete without stopping by Amsterdam’s world-famous museums, galleries and ancient castles. Whichever you choose to visit though, be sure to plan ahead since most of them get booked up fast.

Here is a list of the most important sights in Amsterdam:

Tip: if you’re interested in seeing Amsterdam's museums in a completely new light – after dark, then make sure to attend Museum Night, which takes place in the city each November.

Once you’re settled with cultural sightseeing in Amsterdam, consider joining one of its countless activities! Here are the best activities in Amsterdam: 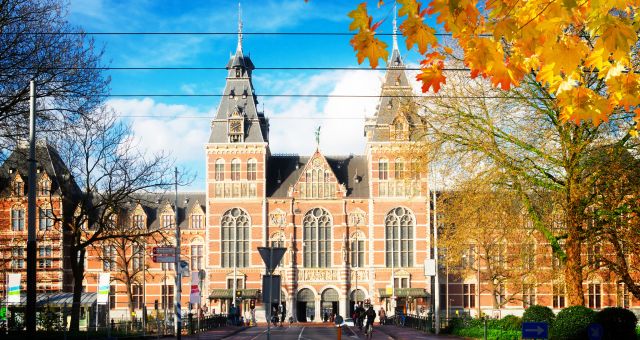 The capital of the Netherlands has, undoubtedly, one of the best party scenes in Europe.

Like other big cities, Amsterdam has a number of hot spots for partying, but the 3 main ones are the Dam Square (same area as the Red Light District), Leidseplein and Rembrandtplein.

Amsterdam's notorious Red-Light District, home to a range of bars in addition to the iconic red windows, is where the largest tourist area of Amsterdam is concentrated. To get a taste of the more luxurious side of the city, you should go to the exclusive clubs at Leidseplein.

Rembrandtplein is another square in Amsterdam you should visit if you want to party in some of the city’s best-known spots. This area is also home to Amsterdam’s best LGBT-friendly bars and clubs.

Between sightseeing and other extracurricular activities, Amsterdam is also a great city to indulge in Dutch cuisine. With influences from Jewish, Turkish, Indonesian, and Surinamese cultures, the delicacies of Amsterdam are mouthwatering!

Here are some Dutch dishes to try in Amsterdam before going back home:

As the modern city that it is, Amsterdam has everything you might need during your holidays there.

If you’re wondering where to stay in Amsterdam, we would recommend avoiding the usual tourist traps such as the Red Light District. Instead, the trendy Jordaan neighborhood is a great option if you want to be close to art galleries, cozy pubs and nice restaurants. Other popular districts include Baarsjes, Oud-Zuid and Houthaven, one of the city’s most up-and-coming areas.

As for medical services, there are several options in the center of Amsterdam and its suburbs, including a tourist medical center. 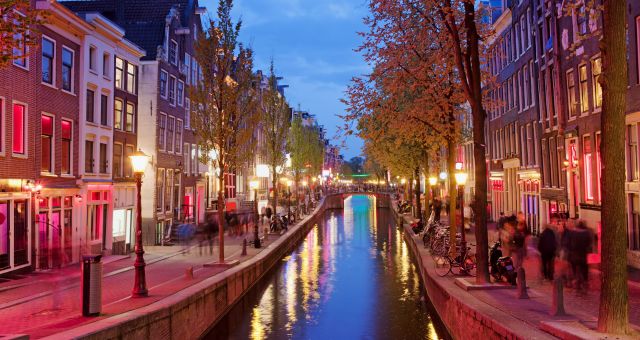 Important phone numbers for your stay in Amsterdam

Find some useful phone numbers for your trip to Amsterdam below:

If you want to experience Amsterdam as the locals do, then hop on a bike! The city has an amazing cycle-path network and thousands of bike-hire shops, and bike stands.

For those who aren’t in a mood to exercise, Amsterdam has an impressive public transportation system. The city’s tram service is very reliable and frequent, while the 4 routes of Amsterdam’s metro system are often the fastest way to reach districts like Bijlmer, Amstelveen and Diemen.

Bear in mind that, in case you arrive in Amsterdam by car, the inner city is quite congested and parking is expensive. Amsterdam also has a low emission zone (LEZ) for diesel vehicles only.

Tip: for the cheapest way to travel around Amsterdam, get a GVB card for unlimited access to the buses, metro and trams or the I Amsterdam City Card, which includes city-wide public transport, access to more than 70 museums, a canal cruise, and bicycle rent. Keep in mind that cash is no longer accepted on buses and trams.

Amsterdam Port is the 2nd largest in the Netherlands and the 4th biggest port in Western Europe. It lies at the junction of the North Sea Canal and the Amsterdam Rhine Canal, and is divided into 3 port areas including the subsidiary facilities of Zaanstad, IJmuiden and Beverwijk.

The Passenger Terminal of Amsterdam is a striking building with large reception halls, a touring car terminal, offices, a convention center, and underground parking. Thanks to its glass facade, it also boasts an amazing view to the IJ-harbor and the city center. To get to Amsterdam’s Centraal Station from here, you’ll only need to walk 15 minutes along the waterside. Alternatively, you take tram 26 or opt for a taxi.

While most cruise ships arrive at the main port near the center, most conventional ferries from the North-East of England anchor at the Felison Terminal in Ijmuiden. You can travel from IJmuiden to Amsterdam quickly and easily by car, bus, Fast Flying Ferry, or cab.

Useful info: if you bring your car over with you on the ferry, there is free, unsecured parking at the port. 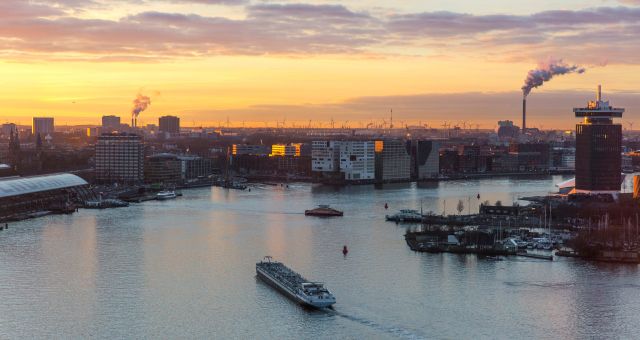 Beautiful sunset from the port of Amsterdam

The wonders of Amsterdam are easily reachable by ferry! The ferry route from Newcastle to Amsterdam is active throughout the year, usually operated by DFDS. Specifically:

Where to book ferry tickets to Amsterdam online

Ready to travel to Amsterdam by ferry? Learn all about the ferry connection to Amsterdam on our Map of ferries, compare timetables and fares, and book your ferry tickets to Amsterdam at the same prices as ferry companies!