A year-round guide to local festivals in the Canary Islands

The Canary Islands are known worldwide for their paradisiacal beaches and spectacular landscapes. However, the islands of the eternal spring have much more to offer than sandy coastlines and great suntanning.

The archipelago has also a very rich culture and gastronomy. So, what would you say about going on a cultural trip to attend the most popular festivals in the Canaries and celebrate with locals this year? Keep reading and find travel tips about the best local festivals in the Canary Islands and information about dates, traditions, and places. 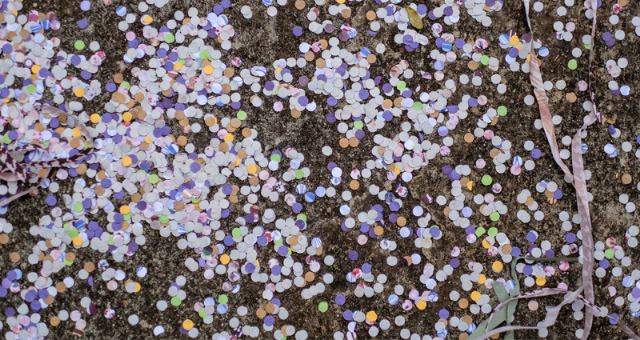 Colorful confetti in the carnivals of Santa Cruz de Tenerife

Carnival is synonymous with the Canary Islands and it is deeply connected to their culture and history. Each of the 8 main islands has its own traditions and festivities. However, the carnival of Las Palmas de Gran Canaria and the carnival of Santa Cruz de Tenerife are the most popular celebrations of the archipelago!

The carnival of  Santa Cruz de Tenerife is one of the most popular festivals in the world and it is held every year between mid-February and early March.

It includes parades, dances, bands of street musicians, costume contests, drag queen shows, and much more. So, what are you waiting for?

Put on your best costume and celebrate the carnival in the Canary Islands!

Tip: we recommend you visit La Palma on the day of Los Indianos, a celebration taking place on the Monday of the La Palma Carnival. It’s a tribute to the island’s relationship with Cuba so everyone dresses in white and the streets are decorated with Cuban flags and colorful motifs.

Day of the Canary Islands

Every year on May the 30th, the entire archipelago commemorates its eventful history with a big celebration. Grasp a sense of the local culture by spending the Day of the Canary Islands, trying on the colorful costumes, dancing to the folkloric rhythms, joining the games, and tasting delicious local delicacies.

However, the preparation starts a few weeks earlier with numerous dances and concerts across the Canaries. Therefore, you can visit some typical Canarian craft markets to buy some handmade souvenirs and also contribute to local commerce.

Descent of the Lady of the Snows in La Palma

Every 5 years, the island of La Palma celebrates numerous festivals that last for more than a month in honor of its patron saint, the Lady of the Snows (Virgen de las Nieves).

Between the months of June and August, there are several ludic festivals and religious events. Some of the most popular acts are the pilgrimage (la romería), the masks, or the Minué dance also known as the “festival of the 18th century” recreating scenes from historic 18th-century courtly dances.

Aaand there is more! The icing on the cake is the Dwarfs’ Dance (Danza de Los Enanos), which is the highlight and signature dance of the La Palma festival. In this show, 24 dancers transform into dwarfs in a matter of seconds and begin to dance in polka rhythms.

Useful information: the next descent will take place in the summer of 2025. 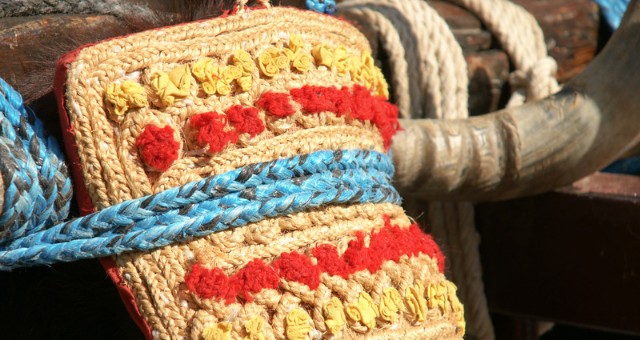 An ox with handmade decorations in a pilgrimage in La Palma

The town of Agaete, located on the island of Gran Canaria, celebrates its most important day on the 4th of August every year. Rama means branch and it is a festivity, in honor of Our Lady of the Snows (Virgen de Las Nieves) that brings locals together.

People are dancing in the streets following the music's rhythm and waving branches in the air that took from the Tamadaba pine forest that they later offer to the Virgin.

You may also see some people hitting the water with the branches commemorating an ancient rite practiced by the island's aborigines asking their gods for water.

Tip: if you are going to celebrate the Rama in Agaete, you can take the opportunity to take a ferry from Gran Canaria to Tenerife. The journey takes about 2 hours!

We leave the colorful festivities of the island of Gran Canaria behind to reach Tenerife and attend one of its most popular celebrations held in the picturesque town of La Orotava. The Corpus Christi religious celebrations take place every year between May and June.

The streets of La Orotava are covered with stunning art installations made of colored volcanic sands and thousands of flowers. The whole town transforms into a florescent garden covered with carpets of flowers. These carpets (alfombras de flores) come in many different variations from majestic geometric shapes to detailed religious scenes.

Follow the decorated streets that will lead you towards the most stunning spectacle of La Orotava, to the Town Hall square that is covered entirely with colorful flowers.

Tip: you can also attend the pilgrimage to explore the Canarian culture.

Descent of the Virgin of the Kings in El Hierro

The island of El Hierro celebrates its most important festival in honor of its patron saint every four years, the Descent of the Virgin of the Kings (La Bajada de la Virgen de Los Reyes). The locals eagerly await the big celebration taking place on the first Saturday of July. The festival begins with a pilgrimage that takes the Virgin on a journey of more than 28 km from her hermitage to the capital of the island, Villa de Valverde.

In addition to seeing traditional costumes from El Hierro characterized by white clothes and colorful hats, you will listen to Canarian music and dance to the rhythm of traditional instruments such as the chácaras (a type of castanets). Prepare to get enchanted by a mixture of magical musical notes, dancing moves, and exquisite local delicacies. 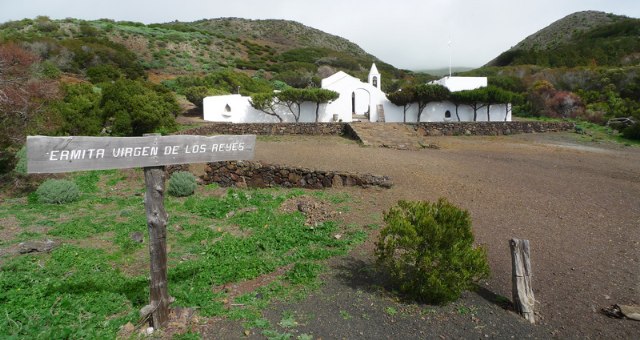 The hermitage of the Virgin of the Kings in El Hierro

In Lomo Magullo, a town in the municipality of Telde on the island of Gran Canaria, a festival is celebrated every August. It is the dramatization of an aboriginal rite in which locals were asking the god Achamán for rain.

Nowadays, the locals celebrate the tradition of  “La traída del agua” with an epic water fight in which you will end up completely soaked so better take a change of outfit with you. A firecracker starts the celebration around noon and the water battle kicks off with traditional music in the background!

The celebration closes with an offering to the Lady of the Snows (Virgen de Las Nieves) and with La Secá, a popular dance!

Where to buy ferry tickets online?

Don't wait any longer to discover the traditions of these wonderful islands! On Ferryhopper, you can compare prices and book your ferry tickets to the Canary Islands with no extra fees.

Tip: did you know that you can track your ferry in real-time at any time with the Ferryhopper app? Download it now and have your tickets at hand easily and quickly!