Top things to do in the Dalt Vila of Ibiza

The jewel of Ibiza!

Ibiza is not only known for its nightlife and beautiful beaches, but also for its fortified old town, Dalt Vila, perched on a small mountain next to the sea. Having been officially named a World Heritage Listed Site by UNESCO in 1999, Dalt Vila is the best preserved coastal fortress in the Mediterranean.

If you don’t want to miss anything, however, we’ve made a list of 6 must-see attractions in the ancient hill town:

Dalt Vila has five entrances, but the Portal de ses Taules is the most important as it offers one of the best views of the Cathedral and the fort itself. In order to reach this well-known entrance, you must walk along carrer d'Anníbal. Continue straight on via d'Antoni Palau and you will see the getaway in a few minutes.

It is situated in front of the old market, between the bastions of Sant Joan and Santa Llucia. The gateway is crowned by the imperial coat of arms and crown, and flanked by two statues, replicas from Ibiza's Roman era: that of the goddess Juno and that of the warrior Cayo Julio Tirón.

Once you leave the portal you will find the multi-arched Patio de Armas (armory courtyard), where the island's hippy markets were once held.

Ready to continue? Since only road vehicles driven by residents are allowed in Dalt Vila, you will have to do your sightseeing on foot. We suggest wearing comfy shoes as the cobbles can be slippy with flip flops. If you get exhausted hiking up and down the endless streets, hills and stairs you can refuel at one of the many chic Mediterranean restaurants in the area. 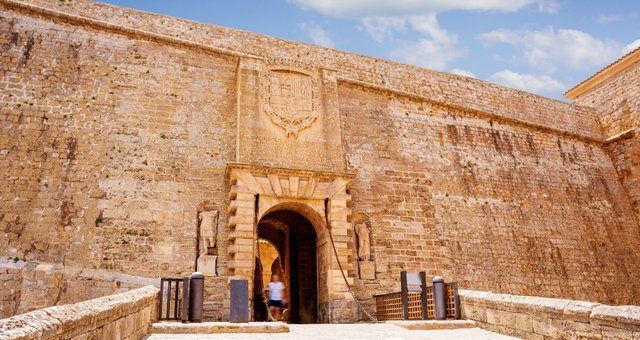 The back entrance to Dalt Vila, Port Nou (reached from behind Plaza del Parque), has a more gradual ascent than Portal de ses Taules and will lead you to the Contemporary Art Museum. It is located in an emblematic 17th-century building, the old Hall of Arms of the Ibiza Royal Forces. Opened in 1969, this is one of the oldest contemporary art museums in Spain.

The MACE boasts an outstanding collection of avant-garde art and engravings. Its collections contain works from the 1960's to the present day by both well-known artists as well as lesser-known ones, natives or residents of the Balearic Islands.

The museum also has a lovely garden. The entry to the gallery is free. 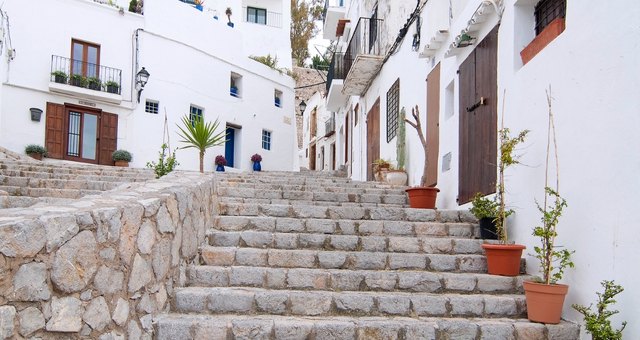 Highlights inside include valuable works of art, such as the high altarpiece that holds the image of the patron saint of Benacazón, Our Lady of the Snow, to whom the church is dedicated.

Privileged with the highest position of Dalt Vila, the cathedral also offers wonderful panoramic views over the city, the port and the sea stretching out as far as sister island, Formentera. 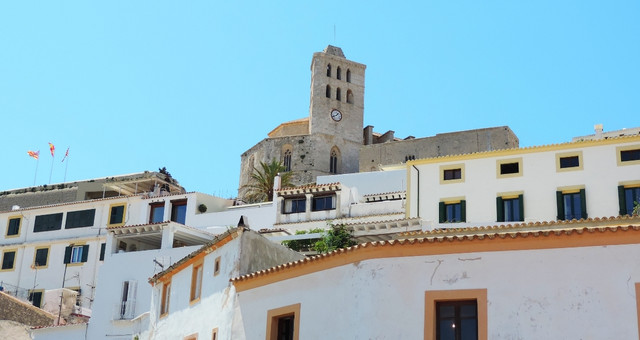 The Puget Museum is housed within a former aristocratic residence, known as Can Comasema, in the old main street of Dalt Vila. It has a permanent exhibition of 130 pictorial works by Narciso Puget Riquer and Narciso Puget Viñas, two of the most prominent contemporary Ibizan artists. Their oil paintings are in a style known as Costumbrism.

The museum is infused with Catalan-influenced, Gothic style elements and features a beautiful inner courtyard and large windows with views of the port of Ibiza.

With its nearly 5 preserved hectares, the Puig des Molins' Monographic Museum is the largest and most well-preserved Phoenician-Punic necropolis in the western Mediterranean basin.

Located in Puig des Molins, just outside Dalt Vila, you can easily visit it before or after wandering around the hilltop old town. It gets its name from the windmills that have dominated the peak from about the 15th century onwards (molins in Catalan).

The museum is home to archaeological collections from the Carthaginian era, including burial grounds and even some Roman artifacts. There are around 3000 tombs, of which just 340 are visible from the exterior. 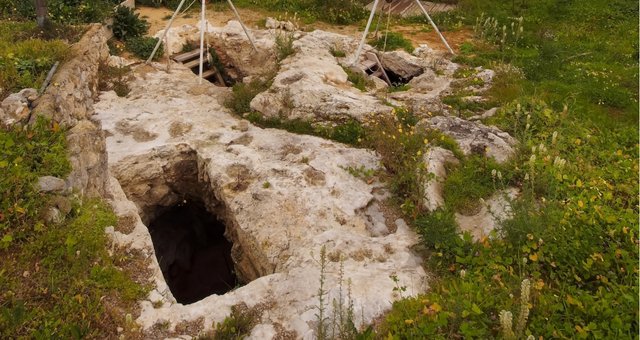 For the ultimate cinema experience, the open-air cinema Paradiso in Dalt Vila, located on the rampart of the Bastion of Sant Pere, is a must-visit. Sit back on custom made bean beds with drinks and popcorn, and watch cult classics and recent box office smashes with the silhouette of D’alt Vila in the background.

Tip: to end your night in the best possible way, visit Tirapalla, a casual bar famous for its spectacular views of the old town of Ibiza. 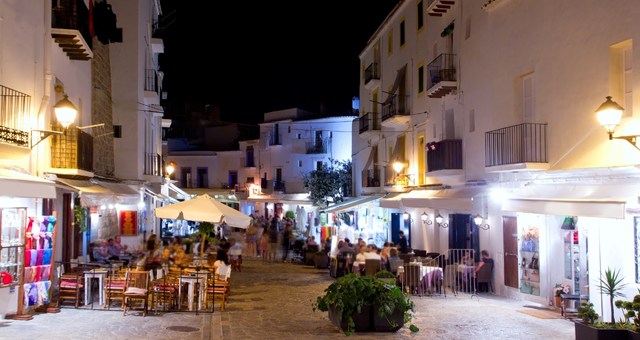 Ready to explore the magnificent old town of Ibiza? Book ferry tickets to Ibiza online on Ferryhopper at no extra cost!

Tip: planning your trip to Ibiza and looking for the best way to travel to the island? Check out our complete guide on how to get to Ibiza.