7 islands with a rich history and famous ancient sites

If you are a history lover or enjoy sightseeing during your holidays, then the Greek islands are perfect for you. Most Greek islands have a rich history that dates back to ancient times. Explore the best islands for sightseeing and cultural activities in Greece, and book cheap ferry tickets on Ferryhopper.

Here is a list of historically significant islands in Greece with important cultural heritage sites:

The goddess of fertility in Aegina

Aegina is in the Saronic Gulf, close to Athens. The island has been inhabited since ancient times and it's a great destination for those of you looking for a quick getaway from the Greek capital. We recommend that you visit the impressive Temple of Aphaia (or Aphaea) that dominates the eastern part of the island and that was used to worship a female deity of fertility.

Apart from the ancient temple, you can also explore the medieval village of Paleochora. Walking around on the hillside where a lively village used to stand, you will encounter old chapels, fortification ruins and house remnants. The village of Paleochora was destroyed due to pirate attacks and a series of war battles, but it still holds its beauty.

If you wish to find out more about the rich past of Aegina, you can visit the Archaeological Museum of the island, right next to the ancient settlement of Kolona. You will have the chance to see sculptures dating back to the 7th century BCE, learn about Roman times on the island, as well as explore the historic connection of Aegina with more islands through findings from the islands of Rineia and Delos. 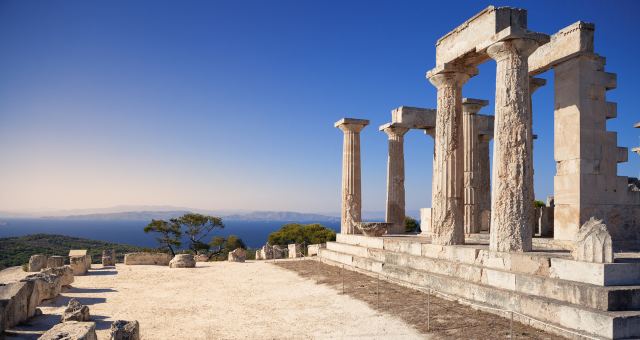 View to the sea from the Temple of Aphaia in Aegina

Delos, the center of the Cyclades

Delos is located at the heart of the Aegean Sea, right next to Mykonos. The whole island is one of the most important archaeological sites in Greece. Delos was considered to be sacred and was home to one of the most significant sanctuaries in antiquity.

Delos is uninhabited and visiting the island feels like walking through an open-air museum. The sanctuary and the ancient city are in great condition, giving visitors a unique opportunity to discover the everyday life of the inhabitants of a prosperous city in the Hellenistic and Roman times.

Due to the great importance of the findings discovered on the island, Delos is a designated UNESCO World Heritage Site. We recommend visiting the sanctuary of Apollo and the Terrace of the Lions, as well as the museum of Delos with its unique collection of ancient pottery, idols and sculptures. 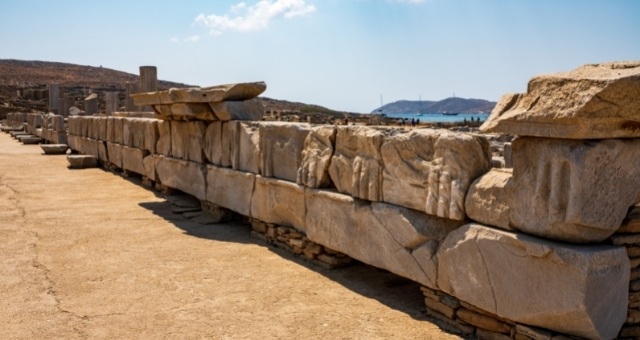 Impressive ancient ruins by the sea in Delos

The Portara of Naxos

The first thing you notice when arriving at the port of Naxos is the impressive Portara, the marble gate of the ancient Temple of Apollo, which is also the island’s landmark.

The rich history of Naxos is evident as soon as you arrive on the island. Apart from Portara, the archaeological museum of the stunning mountain village of Apeiranthos should be another stop on your itinerary. The collection of the museum includes idols, pottery and small artifacts that date back to the Early Cycladic period.

You should also visit the Temple of Demeter, the ancient Greek goddess of harvest, which dates back to the 6th century BCE. The temple is located in the village of Sangri, about 30 minutes by car from the town of Naxos. In the villages of Melanes and Apollonas, you will find the impressive statues of kouroi, lying horizontally on the ground, with an imposing height of more than 10m. 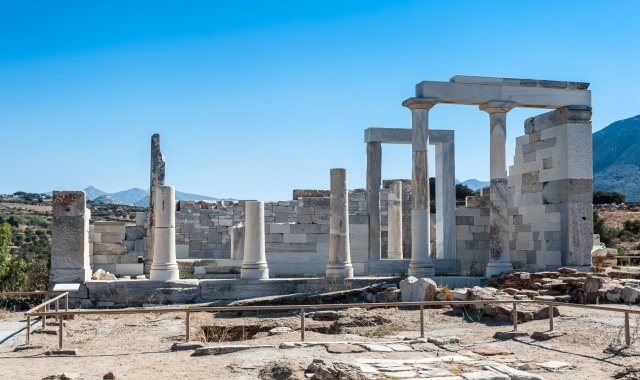 The Temple of Demeter, close to the mountain village of Sangri in Naxos

Samos, the island of Hera

Samos has a long history, which you can discover by visiting the island’s impressive museums and archeological sites. According to mythology, the island was the birthplace of the ancient Greek goddess Hera. That is why one of the top attractions on the island is the Heraion of Samos, a temple dedicated to Hera.

The temple is close to another important site, the ancient city and castle of Pythagoreion. Make sure that you visit the walls of Polycrates, the ruins of the ancient theater close to Spiliani monastery, as well as the Roman baths.

Samos has also 2 archaeological museums, one in Vathy and one in Pythagoreion. Both have unique artifacts, sculptures, ceramics, and idols. 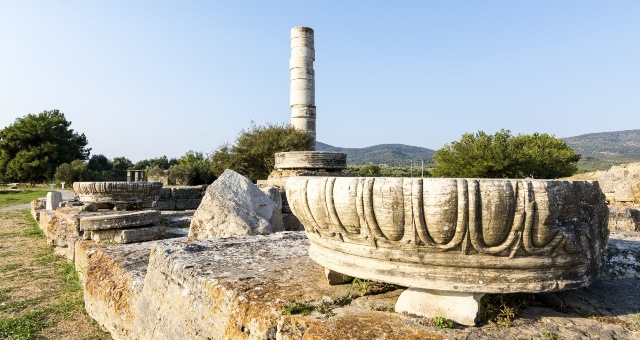 The ruins of the Heraion of Samos, a sanctuary dedicated to goddess Hera

Rhodes is located in a strategic position in the Dodecanese and has been an important economic and cultural center throughout history. One of the seven wonders of the ancient world, the huge statue of the Colossus of Rhodes was constructed on the island, yet it collapsed during an earthquake in 226 BCE.

The Acropolis of Rhodes and the Temple of Apollo are the first sites to visit on the island. Other places of great archaeological interest that we recommend are the ancient cities of Kamiros, Vroulia and Lindos. The ruins of the citadel of Lindos offer a breathtaking view of the Aegean blue. 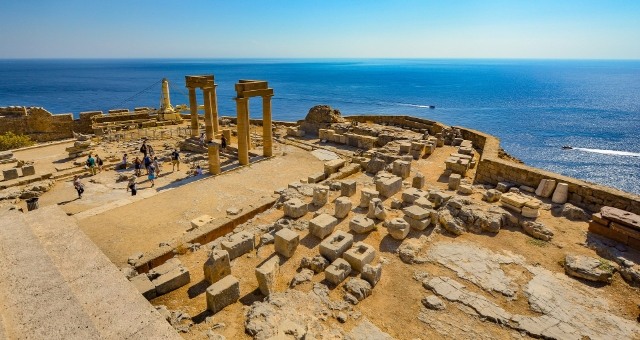 The ruins of the Acropolis of Lindos in Rhodes

Kos, the island of Hippocrates

Vacation in Kos feels like a trip through history. Due to its location in the Dodecanese, close to the Turkish coast, the island has had many influences across the centuries. These are evident in the architecture, as well as the monuments and archaeological sites.

Near the main port of Kos, you can see the ruins of the Ancient Agora with its distinctive columns, temples and walls. In the city center of Kos, you can visit the beautiful Roman Odeon of Kos built in the 2nd century CE, as well as the impressive, well-preserved Casa Romana.

We also recommend visiting Asklipieio, an ancient sanctuary and medical school dedicated to the god of health, Asclepius. The island is also considered to be the birthplace of Hippocrates, one of the most significant figures in the history of medicine. 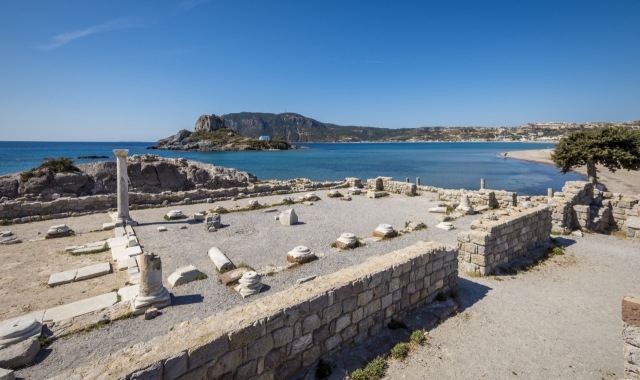 From c. 3000 BCE to c. 1100 BCE, Crete was the center of the Minoan civilization, one of the oldest in Europe. During the Minoan period, Crete was an important maritime trading power. The island prospered and developed cities with impressive architecture, arts and crafts, as well as a writing system that is yet to be decoded!

The most notable Minoan archaeological sites are the palaces and settlements of Knossos and Phaistos. Knossos is located just 5km southeast of the city of Heraklion and Phaistos about 55km south of Heraklion.

In the archaeological museum of Heraklion, you can see artifacts, tools and idols that were discovered in the excavations of Minoan sites. Crete is a big island with a history of more than 5,000 years, so there are many monuments and museums to visit.

The impressive interior of the Palace of Knossos in Crete

Ready to travel back in time and unravel the ancient history of the Greek islands? Choose your favorite island for cultural and historical sightseeing, check all the available routes on our Map of Ferries and get ready for a trip through Greek history!